Modern technology wouldn't be possible without a vast infrastructure of networks to connect a widespread user base and allow communications to happen seamlessly and efficiently. Zayo Group Holdings (NYSE:ZAYO) has been working for a long time to become a key player in the network infrastructure business, with applications for cloud computing as well as fiber and bandwidth connectivity.

Coming into Tuesday's fiscal third-quarter financial report, Zayo investors wanted to see continued signs of strong growth, turning around a year-earlier loss and moving forward aggressively after having made some key acquisitions. Zayo's numbers were relatively solid, but some signs of potential sluggishness in key areas raised worries that its future might involve facing some major hurdles. Let's take a closer look at Zayo Group and what its results say about its path forward. 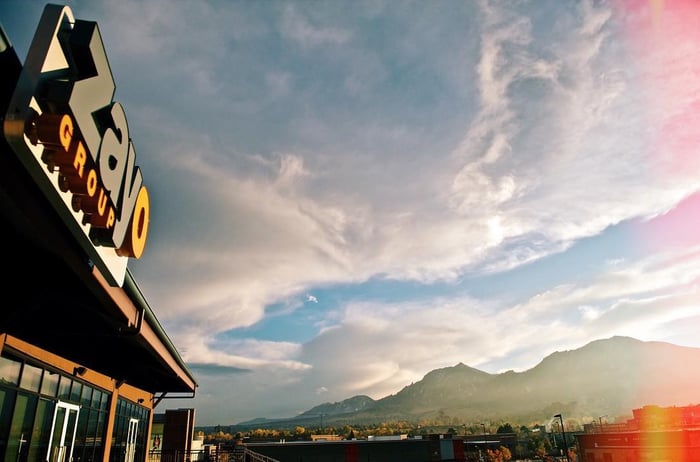 Zayo Group's fiscal third-quarter results were fairly strong. Revenue rose 15% to $550.2 million, which was slightly better than the consensus forecast among investors for $544 million in sales. The company bounced back from a year-ago loss to post net income of $27 million, and that worked out to $0.11 per share, topping the $0.09 per share that most of those following the stock had expected to see.

Looking more closely at Zayo's results, the most important news from the quarter in the company's eyes was its acquisition of infrastructure and telecom services provider Electric Lightwave. The $1.43 billion deal closed at the beginning of March, adding 8,100 route miles of long haul fiber and 4,000 miles of dense metropolitan-area fiber in cities across the West. It also provided connectivity to about 100 data centers and more than 3,100 enterprise buildings.

Zayo's bookings bounced back from a tough period last quarter. Total net new sales came in at $6.9 million, with the enterprise networks business leading the way with $2.3 million in bookings. The transport segment took in $2 million, while fiber solutions had bookings of $1.7 million and the colocation business accounted for the remaining $900,000.

Yet Zayo saw a continued slowdown in bringing in major business. The company didn't bring in any new projects exceeding $20 million in capital expenditures during the quarter, marking the first period since mid-2015 that Zayo hadn't seen any sizable business. What Zayo found, however, is that it's getting a more diversified stream of business, with smaller customers accounting for an increasing proportion of its overall bookings.

CEO Dan Caruso made some useful comments during the conference call. The CEO said that the timing of the Electric Lightwave acquisition made it challenging for Zayo to present detailed supplemental information, creating some temporarily opaqueness in the financials. Yet overall, Caruso was optimistic about the industry, saying that consolidation, 5G development, and cloud and data strategies are all combining to "create great opportunity for us, and there's both edge and direct connect strategies prevalent across the content space, the cloud space, and the software space."

Zayo's guidance for the full year remained similar to what it explained in its last report. The company still expects fiber solutions to see a 10% drop in organic revenue, showing the extent to which Zayo is counting on acquisitions providing a boost in that segment. The colocation, transport, and enterprise networks segments should see modest positive gains in the single-digit percentage range, with the fastest growth coming from colocation. Yet many of those who follow the stock have placed a lot of emphasis on the fiber part of the business, and so even a solid performance during the fiscal third quarter of 6% organic revenue growth wasn't enough to allay worries about future expansion.

Zayo shareholders weren't happy with the report, and the stock was down 7% in after-hours trading following the announcement. Despite seeing plenty of good prospects, Zayo will need to work on execution in order to integrate its recent acquisitions effectively and make the most of its profit opportunities going forward.