Please ensure Javascript is enabled for purposes of website accessibility
Log In Help Join The Motley Fool
Free Article Join Over 1 Million Premium Members And Get More In-Depth Stock Guidance and Research
By Dan Caplinger – Aug 22, 2019 at 8:31AM

It's always hard for investors when a company is in the process of going private. With an offer on the table, there's often little upside for shareholders when business results are good, but poor performance can put a merger or acquisition at risk. Zayo Group Holdings (ZAYO) announced its plans three months ago to accept a bid from a group of private equity investors, and the stock has largely traded in line with the cash offer that those investors offered.

Coming into Wednesday's fiscal fourth-quarter financial report, Zayo Group investors didn't have huge expectations for the company, anticipating slight declines in both sales and earnings. Zayo's results were slightly better than many had predicted, but more important was the news that the communications infrastructure specialist gave on its progress in completing its merger.

Zayo Group's fiscal fourth-quarter results were generally solid. Revenue of $650.6 million was down 1% from year-ago levels, but many of those following the stock had anticipated slightly larger top-line declines. Net income climbed sharply to $63 million, producing earnings of $0.26 per share. Moreover, the company's preferred adjusted pre-tax operating earnings metric was higher by 3.2% year over year. 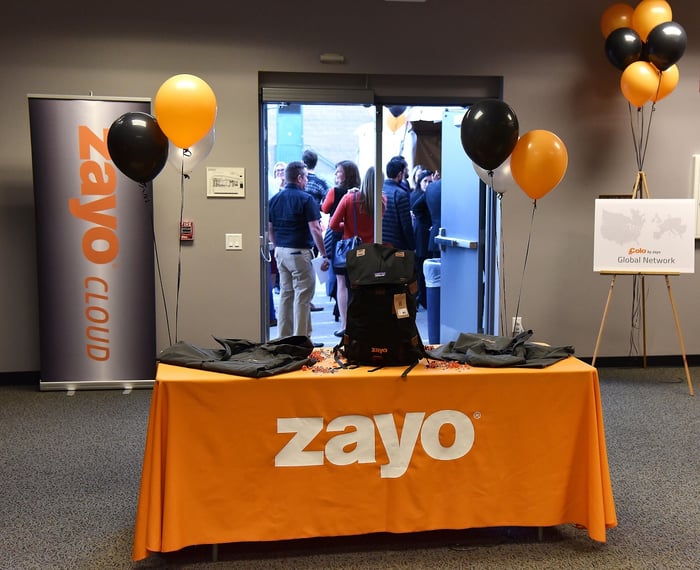 Fundamental performance for Zayo seemed in some ways to be sluggish. Net installations of $1.1 million were down by about a third from what Zayo saw in the fiscal third quarter, and the implied annualized growth rate of 3% was down a percentage point from where it was three months ago. The company said that while installations at its network business were solid, headwinds in the cloud computing space proved problematic for the zColo segment. Recurring revenue was up 2.5% to $542.5 million.

One growth opportunity had a big impact on Zayo's internal efficiency. The company's payback period on outstanding booked projects grew to 39 months due to a large expansion project in Florida.

More broadly, Zayo said that its metrics were largely in line with its projections for the 2019 calendar year. Implied growth from net installations in the network segment were in line with the 4% to 6% growth range, and adjusted pre-tax operating margin and cash flow margin levels were better than anticipated. The zColo cloud division saw some growth challenges, but margins were healthy, and the Allstream business continued to generate significant cash flow.

The future of Zayo Group

Zayo Group's focus still remains on getting its deal to go private done, and it made significant progress on that front. In July, shareholders approved the transaction as proposed. At the time, CEO Dan Caruso noted that the vote "supports our view that this transaction is a very good outcome for shareholders and will enable Zayo to accelerate its growth and strengthen its industry leadership."

In addition, Zayo said that it received notice of early termination of the typical waiting period under U.S. antitrust laws. That doesn't take care of all of the regulatory approvals that Zayo will need in order to go forward with the move, as certain states will have to weigh in. But the company has filed necessary documents with those officials as well as any interested foreign governments, and the transaction still seems to be on track to close at some point during the first half of 2020.

Zayo Group shareholders didn't see any danger signs in the financial results or the company's comments about the status of the going-private transaction, and the stock didn't make any major moves following the announcement. As long as things keep going well on the deal front, investors can anticipate that Zayo Group will keep treading water until the company finally does go private.