The data communications infrastructure specialist managed to move in the right direction.

Technology has become cutthroat in the level of competition that companies face, and the need for smart data communications infrastructure has never been greater in an age of cloud computing and data analytics. Zayo Group Holdings (ZAYO) has put itself in position to reap the benefits of strong demand for its infrastructure assets, but its track record of executing on its opportunities has been mixed at best.

Coming into Thursday's fiscal second-quarter financial report, Zayo investors were hoping that the company would be able to hold its own in the face of past challenges. Its results were encouraging, and the company appears to be building momentum in its efforts to boost its prospects for the remainder of 2019 and beyond. 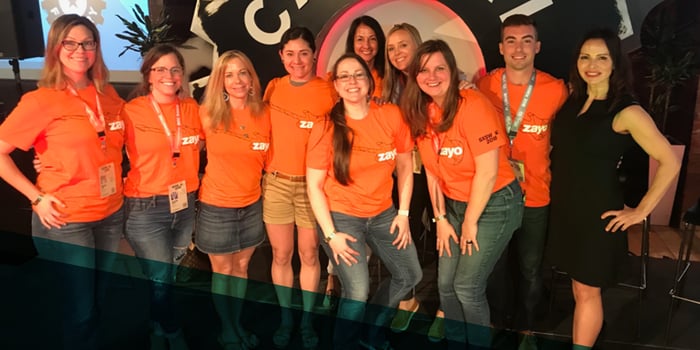 A nice bounce for Zayo

Zayo Group's fiscal second-quarter results provided a much-needed recovery from poorer performance earlier in the fiscal year. Revenue of $639.1 million was essentially flat from three months ago, but it was largely in line with what those following the stock had expected. Similarly, earnings of $0.13 per share fell short of the consensus forecast for $0.14 per share on the bottom line, but it was still markedly better than the year-earlier quarter.

Looking at Zayo's metrics, there was a lot of good news to celebrate. Net bookings came in at $8.3 million, up by $400,000 from year-earlier levels and the second-highest figure in the company's history. Greater levels of business activity in the media, content & commerce segment as well as in finance & professional services helped to offset some deterioration in bookings from carrier clients. Zayo also did a better job of bringing in business that pays off quickly, boosting the amount of revenue from projects with less than 12-month payback profiles and reducing the amount of business taking longer to collect on.

Gross installations also picked up momentum, coming in at $7.8 million, up 3% from the year-ago quarter. Especially noteworthy were the company's efforts to pick up business in the fiber and transport areas, and the size of its service activation pipeline climbed 11% year over year to $19.4 million.

Zayo got a bit more loyalty from its client base. Churn levels were very slightly lower, and although they've stayed stubbornly in a range around 1.2%, the company is increasingly optimistic that it can push the churn rate down toward 1.1% in the long run.

What's ahead for Zayo?

The key question right now is how it will execute its planned split into two separate entities. At this point, CEO Dan Caruso and his team seem committed to looking at one business focusing on network infrastructure and the other concentrating on enterprise solutions. From an investor standpoint, the benefit of the breakup is that the move should make it simpler for the infrastructure unit to qualify as a real estate investment trust and obtain tax breaks as a result. But Zayo is also concerned that it needs its strategic customers to keep seeing Zayo as a broad-based provider of both products and solutions, and so maintaining a level of seamlessness will be important to any eventual dual-company structure.

Zayo sees its network business as becoming its crown jewel, with the bulk of its revenue and the best growth prospects. Yet if it can separate out its colocation business, Zayo would give that unit more independence and greater scope to pursue its own opportunities.

Shareholders seemed to be pleased by the progress that the company has made, and the stock climbed 1.5% in after-hours trading following the announcement. There's still a long way to go, but Zayo's efforts show that the company is serious about making the most of the opportunities it has right now.