The importance of smooth and effective communications in the modern technological age has never been greater, and laying the groundwork for making those communications possible doesn't just happen without effort. Zayo Group Holdings (NYSE:ZAYO) has worked hard to build up its network of communications infrastructure assets, but it hasn't always gotten the recognition it deserves in doing so.

Zayo had originally been expected to release its fiscal third-quarter financial report on Thursday, and investors were anticipating continued earnings growth from the company. However, the company announced its results a day early in conjunction with a buyout bid from a group of private equity investors. The financial report included some encouraging signs, but it looks likely that shareholders won't have the chance to participate in Zayo's future prosperity. 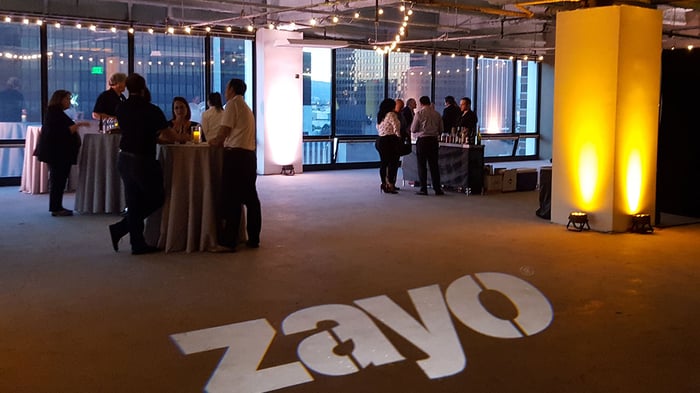 In the absence of the going-private offer, Zayo Group's fiscal third-quarter results would likely have provoked a mixed response. Revenue came in at $647.2 million, which was roughly flat from year-ago levels but a bit better than the 1% top-line decline that most of those following the stock were expecting to see. Net income of $34.7 million jumped by nearly half over the same period, although earnings of $0.15 per share were a bit weaker than the $0.17 per share consensus forecast among investors.

Zayo didn't provide quite as much detail about its business in the quarterly report, perhaps because of the imminent transaction. Net installations came in at $1.7 million, which was down sharply from the year-ago period but up a bit from where it was three months ago. That implied an annualized growth rate of about 4%, which was in line with the 2019 guidance that Zayo gave earlier. Recurring revenue of $538.3 million was up 4.5% year over year, and adjusted pre-tax operating earnings produced gains of close to 5% over the same period.

Zayo also got a bit more efficient with its bookings. The infrastructure specialist said that it shortened its payback time on contracts to just 15 months, down from 20 months a year ago. Capital and up-front expenditures have remained reasonable in light of the level of bookings Zayo has attracted.

The art of the Zayo deal

However, all the attention focused squarely on Zayo's deal to go private. Until the announcement, most investors had expected the company to follow through on its plans to break itself into two separate entities.

But that all changed with the offer from Digital Colony Partners, EQT, and Devonshire Investors. This consortium of private equity investors offered to pay $35 per share to current Zayo Group shareholders. That put a total value of roughly $14 billion on the company when you consider the assumption of debt that the acquirers will take on in the going-private transaction.

However, the acquisition isn't necessarily a done deal. A majority of Zayo shareholders have to agree to adopt the buyout agreement, and Zayo will have to comply with a set of covenants set out in the legal documents outlining the deal. Certain regulatory approvals will also be necessary. Even so, Zayo anticipates that it will be able to close the merger in the first half of 2020, giving investors roughly a year more to remain independent.

Zayo shareholders celebrated the offer, pushing the stock higher by 8% on Wednesday after the announcement. The roughly 6% discount between the current share price and the $35-per-share offer reflects a bit of uncertainty about whether the deal will go through, but it also accounts for the length of time investors will have to wait before the merger closes and they get their cash. For the company, though, the combination could make it far easier for Zayo to achieve its long-term goals without worrying about having to explain every quarterly fluctuation in its financial numbers.