DryShips (NASDAQ:DRYS) reported its first-quarter results after the closing bell on Wednesday. That said, those results were buried deeply within its press release because the company didn't want them to overshadow what it is becoming. That's probably because the first quarter was another disaster for the company after it spent nearly $2 for every $1 of revenue it took in, and that doesn't even factor in the boatload of cash that went out the door to buy more boats.

However, for the glass-half-full types, the company does see that number improving significantly over the course of this year as its latest additions start generating revenue. If everything goes according to plan, the company could produce a significant amount of annual cash flow going forward given the potential earnings power of its rebuilt fleet. 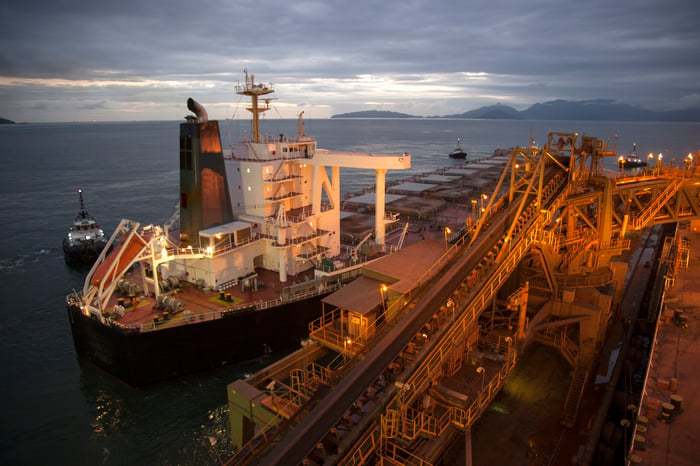 Unfortunately for DryShips, none of those new vessels had arrived yet during the first quarter. Because of that, it only operated 13 ships, which was down from an average of 15.2 during the fourth quarter, and 23 in the year-ago quarter. That shrinking fleet caused the company to report just $11.8 million in revenue during the quarter, which was down from $17.0 million in the first quarter of last year. However, on a more positive note, those vessels at least operated in the black thanks to a significant improvement in charter rates: 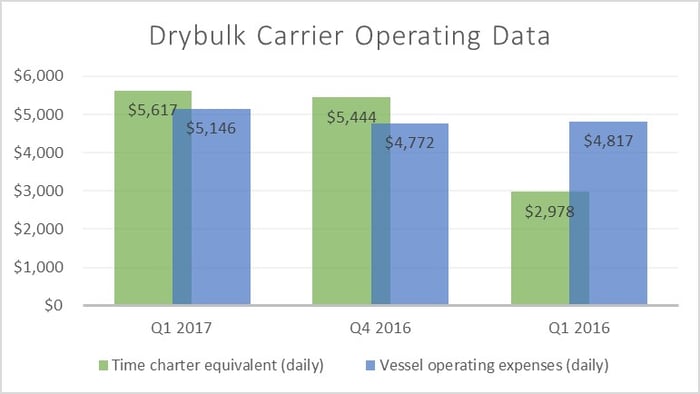 As that chart shows, the average daily charter rate increased versus both the fourth-quarter and year-over-year numbers thanks to a noticeable rebound in shipping rates. That said, the company's vessel operating expenses also went up, which cut into its margins.

Is the tide really turning?

While Dryships continued to bleed cash flow during the quarter, the company expects to plug that hole in the coming quarters thanks to the recent additions to its fleet. So far this year, the company has acquired 17 vessels, several of which entered service during the second quarter. What's noteworthy about many of these ships is that DryShips secured them with long-term time charters, which should provide it with relatively stable cash flow. For example, in early May, the company took delivery on a Newcastlemax dry bulk vessel that it signed to a one-year contract, which should pay it a total of $7.1 million.

These agreements provide DryShips with some sense of certainty surrounding future cash flow. According to the company's estimates, when factoring in these contracts and improvements in shipping rates, its current fleet could generate $77 million in EBITDA on an annual basis. That's up from the $70 million annual EBITDA guidance it provided last month thanks to some recent acquisitions. While it's worth noting that this is an estimate based on currently projected spot market prices for its uncontracted vessels, it does give investors a better idea of the cash-generating capacity of its fleet if everything goes according to plan.

The first quarter was another wash-out for DryShips because the company had yet to benefit from any of its recent acquisitions. Because of that, the company continued to bleed cash. However, it expects to turn the corner in the coming quarters because it has significantly rebuilt its fleet, including adding several vessels under time charters that should provide relatively steady cash flow. That said, investors have paid a significant price in terms of dilution to get to that point, which means the company has a long road to recovery ahead of it before we'll see any tangible return.