The greatest threat facing banks today has nothing to do with interest rates, the next recession, or even regulations.

Digital banking is transforming bank business models, but it isn't the biggest long-term threat to banks. That distinction goes to open application programming interfaces, or open APIs. These are dedicated channels through which data is exchanged between a bank and third-party financial service providers, such as fintech companies.

The upside of open APIs

In January, JPMorgan Chase (JPM -0.79%) said that it would "use technology that will allow customers to authorize Chase to electronically share financial data securely with Intuit's financial management applications, such as Mint, TurboTax Online and QuickBooks Online."

That technology, as the press release went on to note, consisted of open APIs:

Chase and Intuit will use a business-to-business, data-sharing connection called an application-programming interface to download the information quickly and safely. It uses a token to authorize Intuit to download the requested account information on behalf of the customer without requiring customers to give Intuit their Chase user name and password.

JPMorgan Chase is the first big bank to announce an agreement like this.

Previously, Intuit used screen-scraping technology to get the data. It would log into customers' online bank accounts, copy the data from the screen, and then paste it into whatever app(s) the customers used. But screen-scraping puts pressure on a bank's servers, which explains in part why JPMorgan Chase prefers to route the data through an API. 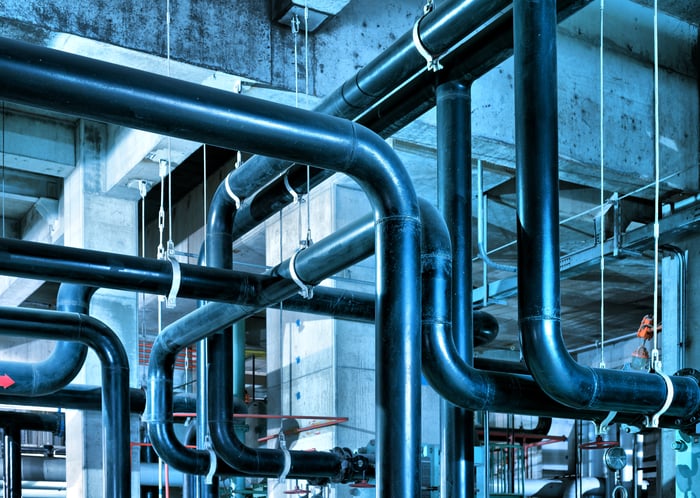 APIs are akin to pipes through which data flows. Image source: Getty Images.

When we all readily click "I agree" online or on our mobile devices, allowing third-party access to our bank accounts and financial information, it is fairly clear that most of us have no idea what we are agreeing to or how that information might be used by a third party. We have analyzed many of the contracts of these third parties and have come to the following conclusions:

- Far more information is taken than the third party needs in order to do its job.

- Many third parties sell or trade information in a way customers may not understand, and the third parties, quite often, are doing it for their own economic benefit -- not for the customer's benefit.

- Often this is being done on a daily basis for years after the customer signed up for the services, which they may no longer be using.

The downside of open APIs

While there's no question that open APIs offer considerable benefits, and to a certain extent are inevitable, they could also transform how people bank, as well as how sticky they are as customers.

For instance, JPMorgan Chase customers that use Intuit's Mint app will almost certainly log on to Chase's app less frequently to check their account balance or transaction history. If they can do so on Mint, and that's where they manage their finances, there's no reason to also check the Chase app.

This interjects a third party between a bank and its customers, reducing a bank's opportunity to cross-sell additional financial products. The impact of this can be substantial. When Wells Fargo (WFC -1.98%) eliminated product sales goals in its branches after its fake-account scandal, new credit card applications fell by over 40%. Think of the hassle and headache it takes to switch primary banking relationships today. This is especially true for customers with multiple financial products. Direct deposit and automatic bill pay further increase switching costs, especially for customers who live paycheck to paycheck and thus don't have the funds to seed a new account at a different bank.

Open APIs could ease this by automating the process of transferring accounts between banks. And it could be done in a way that minimizes the risk of an overdraft in the course of the transfer. This would trim the time, cost, and inconvenience of changing banks. And by doing so, open APIs would dramatically reduce, if not eliminate, switching costs.

It's hard to say exactly how this would play out for banks, but it'd almost certainly open them up to a wave of new competition.