Pity Wall Street. They just don't know what to make of Caterpillar (NYSE:CAT) stock. Just over two weeks ago, StreetInsider.com reported that Caterpillar stunned the Street with an earnings beat, reporting twice as much profit as analysts had predicted.

That sounds like good news, but up on Wall Street it's sparked a bit of confusion, with Bank of America's Merrill Lynch brokerage upgrading Caterpillar stock today to buy, and everyone from Deutsche Bank to Stifel Nicolaus to UBS hiking their price targets on the stock. Meanwhile, over at Axiom Capital, analyst Gordon Johnson is predicting what StreetInsider.com calls "a complete breakdown" in Caterpillar's business model, and advising investors to sell the stock (and all sorts of other companies related to the mining sector along with it).

Confused yet? Here are three things you need to know. 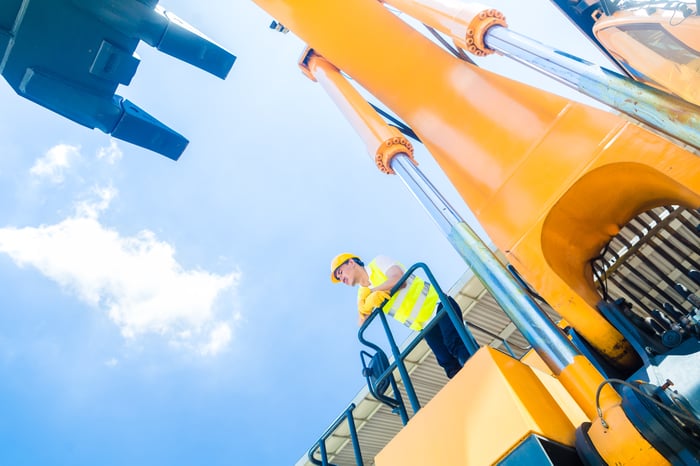 Do you dig Caterpillar stock? Not all analysts do. Image source: Getty Images.

Caterpillar reported its fiscal Q1 2017 earnings on April 25. Q1 revenue roared ahead to $9.8 billion, and analysts swooned over Caterpillar's purported $1.28 in profits per share -- more than double analysts' expected $0.62 per share.

But wait! Did Caterpillar actually earn $1.28 per share? Maybe not. Turns out, the earnings number that had Wall Street so impressed was a "pro forma" number, and not the actual GAAP result. According to generally accepted accounting principles, and as confirmed by S&P Global Market Intelligence, Caterpillar actually only earned $0.32 per diluted share, GAAP. And that number was 30% less than the GAAP profit Caterpillar excavated back in Q1 2016. To get from $0.32 to $1.28, it was necessary to exclude a whole host of restructuring costs that Caterpillar incurred in the quarter -- to pretend, in essence, that those costs didn't exist.

All of a sudden, Caterpillar's big Q1 "beat" starts to ring a bit hollow.

Over at Axiom Capital, this all seems to have alarmed analysts sufficiently to inspire a sell rating on Caterpillar. As Axiom writes, Caterpillar today is a "conviction short call." Citing recent data, Axiom says Caterpillar is in danger of breaking down completely.

Seeing as Caterpillar stock has fallen 4% since earnings day, it looks like a lot of investors are heeding that call.

It's not, however, a popular call on Wall Street. Flummoxed by Caterpillar stock's stubborn failure to rise after its earnings "beat," this morning, Merrill Lynch announced it's going all-in on Caterpillar.

According to Merrill, retail sales are still accelerating at Caterpillar, lending the banker confidence that Caterpillar will beat on earnings again, and raise guidance once more, when it reports in July. As Merrill sees it, the long slump in mining stocks is ending, and Caterpillar has "a long runway" to grow its mining equipment business as the mining cycle turns and moves upwards. Caterpillar is promising to double sales of mining trucks this year, in addition to growing the rest of its business.

So which analyst is right -- Merrill Lynch, which true to form is bullish on Caterpillar, or Axiom Capital, which thinks Cat is a dog? Eschewing Wall Street's faddish obsession with pro forma earnings, let's take a look at something a bit more real -- Caterpillar's cash profits -- and see what they tell us.

Forget about the debate over using pro forma earnings or sticking to GAAP. According to S&P Global data, Caterpillar dug up a whopping $1 billion in real cash profits (free cash flow) last quarter -- more than five times its reported net income for the quarter. Combined with FCF figures for the preceding three quarters, Caterpillar is now generating cash profits at the rate of $4 billion per year. And relative to the stock's $59.1 billion market capitalization, that works out to a not very expensive-looking price-to-free-cash-flow ratio of 14.8.

But I want to add two caveats to that assessment. First, growth. Merrill Lynch may think Caterpillar capable of growing earnings at 20% or better over the next two years. But the broader consensus on Wall Street is that Caterpillar will struggle to achieve even 10% growth over the next five years -- and at 10% growth, even a valuation of 14.8 times free cash flow seems a bit rich to me.

It gets worse, though. To really get a handle on how expensive Caterpillar stock is, you need to factor in the company's debt load, which currently stands at a whopping $30 billion net of cash. Add that to the company's market capitalization, and I'd argue Caterpillar at an enterprise value of $89.1 billion is a whole lot more expensive than its market cap, alone, makes it look. I figure the company's enterprise value-to-free-cash-flow ratio is not 14.8, but 22.3 -- about twice what I'd ordinarily want to pay for a stock growing at 10%.

When all's said and done, therefore, I find myself more in agreement with Axiom than with Merrill Lynch. Once you pull back from the pro forma vs. GAAP debate, and focus on the cash, one thing is clear: Caterpillar stock costs way too much to buy.