Viacom struggles to keep its networks in basic cable bundles.

Viacom remains confident that it can grow its affiliate revenues, but the actions by distributors will make it hard to maintain its subscriber base. On top of that, the lower viewership that comes as a result of fewer subscribers could negatively affect the company's advertising revenue. 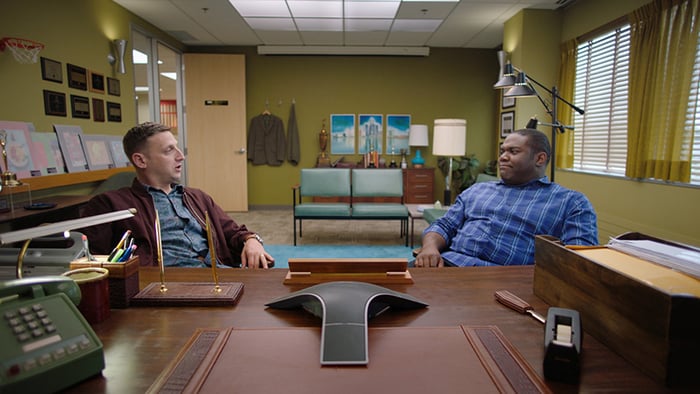 Still from Detroiters, a new show on Comedy Central nobody watched despite its quality. Image source: Viacom.

Is this just a negotiation tactic?

The move by Charter follows the completion of its integration with Time Warner Cable following their merger last year. Charter is now the second-largest cable provider in the country, and it carries considerable heft. It can use its 16.7 million video subscribers as leverage in its negotiations with Viacom and other media companies like Disney (DIS -0.15%).

Moving Viacom's networks to its priciest tier may simply be a negotiating tactic. By practically holding its new subscribers as ransom, Charter may be able to get a better deal from Viacom in terms of its affiliate fee rate. That's especially true if it's showing no ill effects from lacking Viacom networks in its lowest tier.

On the other hand, if Viacom's networks prove so popular that people are willing to pay extra for them, Charter may be willing to pay more per subscriber to Viacom and keep most of its channels in the upper tier. That may mean fewer subscribers, but Viacom could still increase affiliate fees if it charges more.

That's to say, if Viacom's networks are worth as much as it thinks they are, both Charter and Viacom can win. If not, Viacom could see Charter hammer its asking price down when it comes time to renegotiate.

Focusing on getting a few key networks in the bundle

After becoming CEO at the end of last year, Bakish outlined plans to focus on just six flagship networks: Comedy Central, BET, MTV, Nickelodeon, Nick Jr., and Paramount (a rebranding of Spike). The rest of the networks are still important, but those are the big money-makers. Former CEO Philippe Dauman said those networks account for 80% to 85% of affiliate fees. He also seemed intent on getting those networks into the increasingly popular skinny bundles before getting ousted.

Bakish is picking up where he left off, and Charter is pushing him to make the move. Breaking up its networks into tiers could put near-term pressure on overall affiliate fees, but it could allow Viacom to increase the revenue stream in the long run with better contractual rate increases.

It could also open the door for more productive negotiations with over-the-top services, which have largely rejected Viacom's bundle of networks. Sony dropped Viacom last fall in its PlayStation Vue bundles in favor of BBC America, NBA TV, and VICE. Meanwhile, Viacom has been left out of this year's launches of Hulu Live and YouTube TV. Offering contracts for fewer networks may allow these lower-priced competitors to take Viacom's product.

The move would echo Walt Disney, which has successfully pushed ESPN into many lower-tiered television bundles. That includes the lowest tier of DirecTV Now, PlayStation Vue, Sling TV, YouTube TV, and Hulu Live. ESPN continues bleeding subscribers, but the results could be much worse if it wasn't for Disney's efforts to get ESPN into every cable bundle.

Following Disney's lead seems to be the best option available for Viacom right now. Otherwise, it may see itself on the losing end of negotiations with pay-TV operators.