It's my opinion that Bank of America's (NYSE:BAC) stock could soon be a buy if the events in Washington, D.C., continue to roil the markets. I'll spell out exactly how I intend to approach this after laying out my thesis.

In the immediate aftermath of the presidential election, shares of banks rocketed. And none more so than Bank of America. 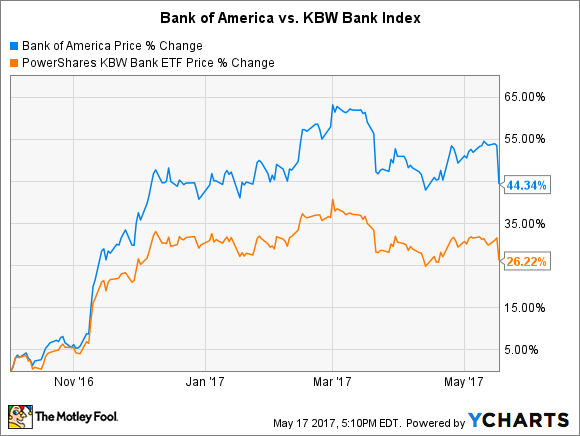 They rocketed because investors believed that a pro-business president would be good for the economy, which would boost loan demand and interest rates. This would position banks to sell more of their primary product, and do so at a higher price.

On the campaign trail, moreover, the current president vowed to "dismantle" the Dodd-Frank Act of 2010, which had been passed to combat the conduct that led to the financial crisis. The regulations passed under Dodd-Frank have become incredibly burdensome to any objective observer.

When a banker with pristine credentials such as Robert Wilmers at M&T Bank spends the lion's share of his widely read annual letter every year talking about the undue compliance burden facing banks, and is seconded by the likes of U.S. Bancorp's Richard Davis and JPMorgan Chase's Jamie Dimon, the fact is that the regulatory environment has gotten too onerous.

So there were good reasons that the market responded.

But the market went too far. Valuations got too far out in front of fundamental performances. This is why I wrote in February that cash will be king in 2017, as it wouldn't be a surprise to see valuations correct sometime this year after the messy realities of governing sunk in.

Some people will see this as market timing, the implication being that it's impossible to time the market. But one should never get dogmatic in their thinking.

The reality is that stocks, measured by the leading stock market valuation measure today, Robert Shiller's CAPE ratio, have only been higher twice in history: In 1929 and 1999.

But interest rates were priced into stocks before the election. What happened after the election, with bank stocks rallying 20% or more, was all about expectations around Donald Trump's ability to deliver on his promise to lower taxes, ease regulations, and boost economic growth.

That wasn't a bad bet, given the Republican unity between the executive and legislative branches. Fast-forward to today, however, and the governing agenda has taken a back seat to the controversies swirling around the president.

It seems increasingly unlikely, if not fanciful, to think that any type of meaningful tax reform can be accomplished at this point. Republican Sen. Mitch McConnell went on the record this week to say that tax reform must be revenue neutral, which effectively eliminates the simulative impact from the proposed reform and will temper any cuts to the corporate income-tax rate.

The same goes for the other legislative priorities the administration had laid out. Things like repealing Obamacare, building a wall, investing $1 trillion in domestic infrastructure, and so on.

The net result is that expectations are being recast. As that happens, it would make logical sense that stock valuations will follow. And as that happens, it's my opinion that there will be attractive investments to be made.

Why Bank of America?

One of those investments is Bank of America.

The nation's second biggest bank by assets is no longer weighed down by legal actions and toxic assets tracing back to the financial crisis. As a result, while Bank of America has spent $200 billion over the past eight years on crisis-related costs, it's now free to grow revenue and earnings consistently.

And growing earnings is exactly what it's doing. Last year was the second best year in Bank of America's history, in terms of the size of its bottom line. By the end of this year, moreover, Bank of America could be on track to meet its profitability targets on an annualized basis.

On top of that, Bank of America has an abundance of excess capital on its balance sheet. I estimate that it could return as much as $23 billion to shareholders by way of buybacks, yet still be considered well capitalized and sail through the quantitative portion of the annual stress tests.

And the bank's chairman and CEO, Brian Moynihan, has repeatedly said that buying back a lot of stock is one of his top priorities. He did so most recently in his 2016 shareholder letter.

Eventually, it will be freed up to do just that. And it'll probably be sooner rather than later. By next year, Bank of America could have a combined payout ratio of more than 100%, meaning that it pays out more in dividends and buybacks than it earns in net income.

This would drive down the capital on its balance sheet, and thereby drive up its profitability. And because profitability and valuation are intimately intertwined, it would boost Bank of America's valuation, a move that would be catalyzed by the bank's falling share count.

It would also increase the buying pressure on Bank of America's stock. This would come from both the bank's repurchase program, as well as from income investors that move back into its stock for the growing dividend.

Consequently, the threshold I'm looking for is around $20 a share. If Bank of America's stock breaks below that, I'll start buying it. I'll do so in multiple stages, which will allow me to average around the bottom.

That's my plan. I think it's a good one.