Despite marijuana stocks racking up huge gains over the past couple of years, many of them have yet to turn a profit. Finding marijuana stocks that have positive bottom lines isn't an easy task.

However, three top marijuana stocks have been profitable over the course of the last year: Aphria (NASDAQOTH: APHQF), Canopy Growth Corporation (NASDAQ:CGC), and Insys Therapeutics (NASDAQ:INSY). Each of these stocks managed to achieve what most other marijuana stocks haven't -- but there's also a catch with all three of them. 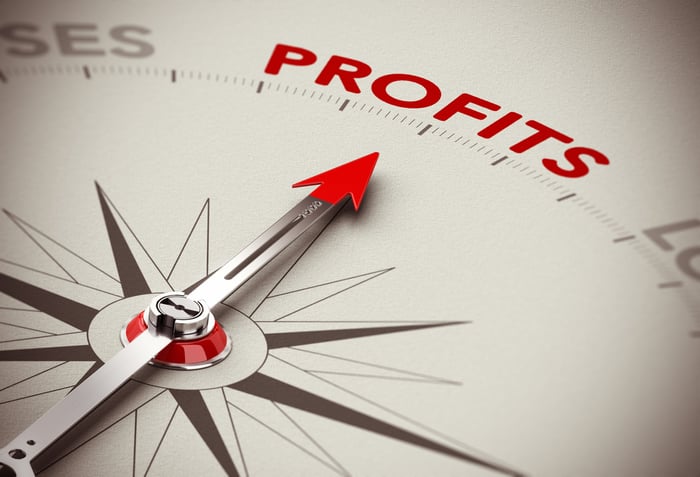 Aphria: Thanks to two other marijuana stocks

Aphria reported net income of roughly $5 million (in U.S. dollars) during the nine months ending in February 2017. The Canadian medical marijuana provider posted revenue of $10.8 million during the period. That's an impressive profit margin of just under 50%. Fantastic, right?

Don't get too excited. The reason Aphria was able to record this profit was that the company sold some long-term investments, generating around $6.7 million in the process. In particular, Aphria sold part of its stake in CannaRoyalty, an investment company specializing in the cannabis market, and MassRoots, a U.S.-based company that operates a technology platform for cannabis-related businesses.

Like most other marijuana stocks, CannaRoyalty and MassRoots aren't profitable yet. Without the benefit from the sale of its stake in the two companies, Aphria wouldn't be profitable, either.

Like Aphria, Canopy Growth Corporation is a Canadian medical marijuana provider that's one of only a handful of marijuana stocks that can claim a market cap topping $1 billion. Unlike Aphria, Canopy Growth didn't need to sell long-term investments to be profitable. The company posted net income of around $3.3 million (in U.S. dollars) for the nine months ending Dec. 31, 2016.

Digging into the details, though, shows that Canopy Growth spent roughly $21.6 million while generating revenue of $18.6 million. Even without doing the calculations, it's easy to see that it didn't turn a profit the way you'd expect. So how did Canopy Growth achieve profitability?

The company recorded around $30 million during the period from unrealized gain on changes in the fair value of its biological assets. In other words, the value of Canopy Growth's marijuana plants increased -- by a lot. That's good news, of course. However, it also shows that Canopy Growth isn't yet at a point to consistently generate profits.

That leaves Insys Therapeutics. The biotech generated net income of $7.59 million in 2016, and it did so without having to rely on a sale of assets or change in market valuations or any other special item. However, there is a big problem for Insys: Profits are dwindling.

In fact, while it was profitable last year, Insys lost $6.5 million in the first quarter of 2017. The issue is that sales of opioid breakthrough cancer pain drug Subsys continue to plunge. First-quarter revenue dropped 40% from the prior-year period.

Although many investors are betting against Insys, it could have better news on the horizon. Its cannabinoid drug, Syndros, has been approved by the U.S. Food and Drug Administration (FDA) and scheduled by the U.S. Drug Enforcement Agency. The FDA is finalizing the label for Syndros. Once that's done, the company can launch the product. With estimates for peak annual sales of Syndros between $300 million and $400 million, there should be a good chance that Insys can return to profitability in the not-too-distant future.

Some might think that profitability isn't important, since so many marijuana stocks have soared despite not being profitable. It's true that growth potential can be more important to investors than profits -- at least for a while. Expectations of future growth have been the primary driver for marijuana stocks, including Aphria, Canopy Growth, and Insys.

However, sooner or later, a business has to make more than it spends. That applies to any industry. At some point in the future, all three of these marijuana stocks (and the many others that aren't profitable at all) will need to consistently generate net income -- without any catches.