For once, yieldco stocks are actually beating the market in 2017.

Don't look now, but the demise of the solar yieldco industry may have been overstated. In the past six months, NextEra Energy Partners (NEP 3.99%), NRG Yield (CWEN 1.75%), and Pattern Energy Group (PEGI) have all outperformed the market, and even the maligned 8point3 Energy Partners (CAFD) has come close.

Maybe the market is starting to see the value in the consistent cash flows and dividends, or maybe stocks had fallen too far in 2016. Whatever's driving the increase, it's good news for yieldcos long term. 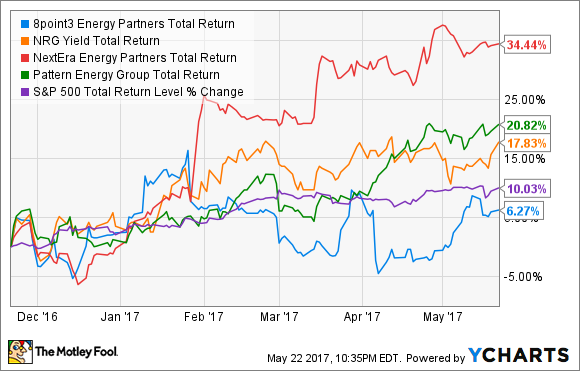 The yieldco chicken and egg

The way yieldcos are structured, they need low dividend yields to survive. Their plan is to issue equity and debt to acquire growth projects. If the equity dividend is too high, those projects won't be accretive and won't help drive dividend growth.

What yieldco operators have found out is that if you can't promise dividend growth long-term, you won't get the low dividend (high stock price) from the market. Confidence is quite literally the most important thing a yieldco can earn. The four yieldcos I mentioned have earned different yields from the market, and that's driven their future prospects. 8point3 Energy Partners in particular saw its dividend go so high that sponsors First Solar and SunPower are evaluating whether or not it would be worthwhile to just sell the company rather than try to feed its growth. 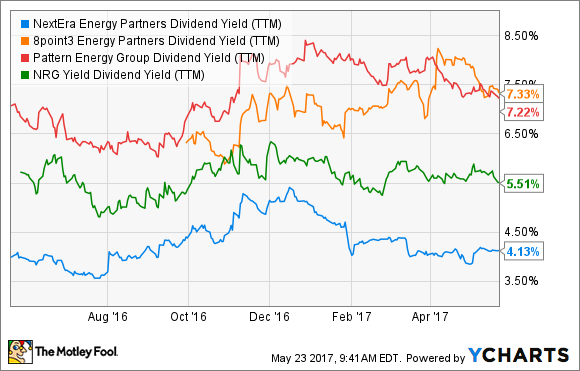 NextEra Energy Partners went the opposite direction, saying it had years of 15% dividend growth in its pipeline. And NRG Yield has nearly as low a dividend, which could allow it to grow its asset base and dividend in the future as well.

You may have noticed that the two yieldcos with the lowest dividends, and therefore best growth prospects, are both sponsored by utilities -- and that's no coincidence.

That's why the market is putting more value on utility yieldcos, and over the long term that should continue. But right now the entire yieldco industry is in a slow recovery, which is a nice bounce for renewable energy investors.

Time to Buy This Secret EV and Renewable Energy Play?
411%