Stocks that pay dividends help investors in two ways: They offer current income, and they give shareholders the prospect for long-term growth. You have to be careful in considering higher-yielding dividend stocks, but below, you'll see why Cisco Systems (CSCO 1.74%), British American Tobacco (BTI -0.94%), and Boeing (BA -0.48%) are worth a closer look, with their 3%-plus dividend yields and potential for gains in the future.

Tech stocks aren't generally known for their dividends, but Cisco Systems has committed itself in recent years to making healthy dividend payouts. After initiating a dividend just six years ago, the networking giant has made seven increases to its quarterly payout, and it has boosted what shareholders receive to nearly five times what its initial dividend payment was. The current dividend of $0.29 per share each quarter works out to a yield of 3.7%. 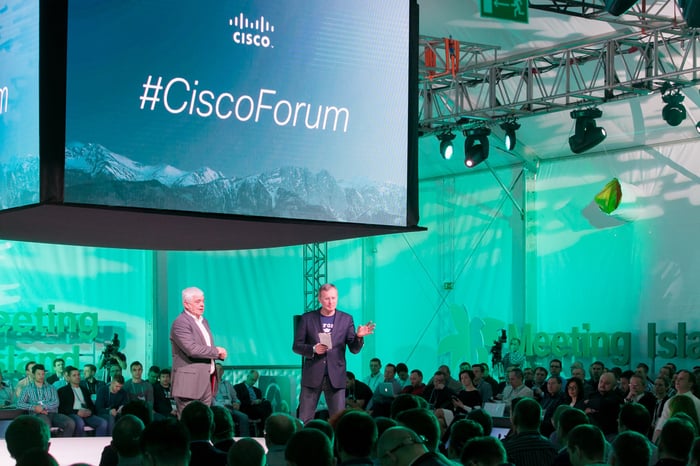 Cisco's recent results have raised some concerns about its ability to sustain its long-term growth trajectory, with an outlook for an actual 4% to 6% revenue decline in the coming quarter raising alarm bells. However, like many tech companies, Cisco has been transitioning away from product sales and toward a subscription-based model, and that has temporarily knocked the company's top line for a loop. Questions about the future of Cisco's business in selling to the federal government have also raised uncertainty. However, in the long run, Cisco maintains its leadership position in the connectivity space, and improving conditions in some of its key markets should help the company's long-term prospects looking ahead.

British American Tobacco is a giant in the global tobacco industry, and it's looking to get even bigger. The company said last year that it would acquire the remainder of Reynolds American (RAI) that it didn't already own, and going forward, BAT sees the prospects for the combined company looking brighter than ever. By uniting worldwide distribution on key brands like Newport and combining forces on reduced-risk products and other innovations, BAT thinks it can stand up to its rivals and come out ahead.

BAT follows the European dividend model of two unequal semi-annual distributions, and the dollar amount of its dividends has fallen over the past 12 months because of the weakness of the British pound. Yet even with the decline, BAT's current yield of just under 4% is attractive, and steady growth over the years when you measure payouts in local-currency terms demonstrates the tobacco giant's commitment to dividend investors going forward.

Finally, Boeing has captured a huge portion of the upsurge in demand for commercial aircraft in recent years. The rebound in the airline industry has driven customers to order new, more efficient planes, and Boeing has helped lead the industry forward with new models designed to bolster carrying capacity while being conscious of fuel consumption.

The surge in interest has led Boeing to make dramatic increases to its dividend in recent years. Since late 2011, Boeing has made six dividend boosts, and the most recent 30% hike pushed its quarterly payment to $1.42 per share, more than triple what the aircraft manufacturer paid just five years ago. The stock has also performed well, so even those big gains were only enough to send Boeing's dividend yield to 3.1%. Yet shareholders aren't complaining about impressive total return figures, and the aerospace and defense industry giant is taking full advantage of promising trends across its entire market to cash in on favorable conditions as long as they last.

Just because a stock has a yield of 3% or more doesn't mean it's a smart investment. In order to know whether a dividend stock really belongs in your portfolio, you have to take a close look and make sure it's consistent with your investing philosophy. For many dividend investors, Boeing, British American Tobacco, and Cisco Systems will be useful parts of a dividend stock portfolio that will produce much-needed income in the months and years to come.

3 Turnaround Stocks to Consider for the Long Term
411%