Graduation season is upon us, which means millions of 20-somethings are on the verge of entering "the real world" for the first time. As a graduation present, we Fools have decided to provide these new investors with a few great stocks ideas to help them start their financial journey on the right foot.

With that in mind, here's why our team thinks Johnson & Johnson (NYSE:JNJ), Under Armour (NYSE:UA)(NYSE:UAA), and Apple (NASDAQ:AAPL) are all great companies for recent college graduates to buy. 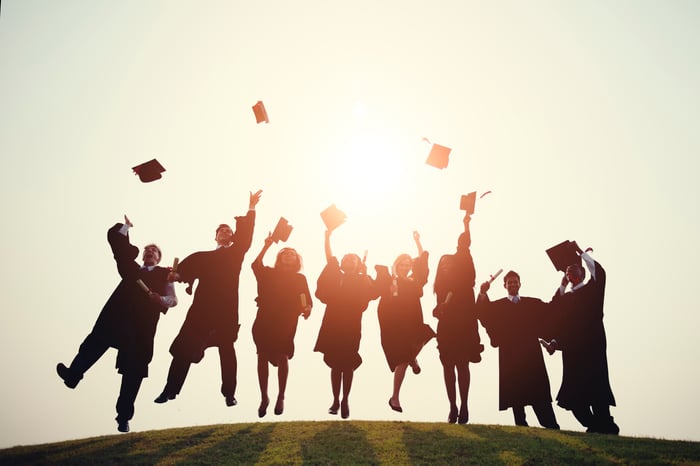 Healthcare is a growth industry

Demitri Kalogeropoulos (Johnson & Johnson): As a recent graduate, you've probably spent some time thinking about the industries that boast the brightest long-term growth outlooks. And while the healthcare sector might not be the place you decided to begin your working career, your retirement portfolio can easily benefit from exposure to this critical piece of the global economy.

Johnson & Johnson is the industry leader and one of the biggest companies in the world. Actually, it's more like a collection of 20 of the biggest companies. The healthcare titan has hundreds of subsidiaries and core operations that dominate attractive market segments including consumer goods, medical devices, and pharmaceuticals. That diversity has served shareholders well over the past few decades, with annual returns in the double digits since 1985.

Yes, Johnson & Johnson's massive sales base makes it unlikely that investors will see head-turning revenue gains in any given year. In fact, organic sales are set to rise by between 4% and 5% in 2017.

But that steady expansion is a small price to pay for one of the market's most dependable dividends. Like clockwork, Johnson & Johnson has boosted its payout in each of the last 55 consecutive years. It currently dedicates just over half of its earnings to the dividend, too, leaving plenty of room for additional growth over the coming decades.

This brand-name stock is on the clearance rack

Brian Feroldi (Under Armour): It hasn't been a fun year to be a shareholder of Under Armour. Shares of the apparel maker have fallen by more than half in the wake of producing back-to-back disappointing earnings reports, which put an end to its six-year streak of reporting 20%-plus revenue growth. The string of disappointing reports has caused traders to flee from this formerly high-flying stock, leading us to where we are today. However, there are reasons to believe this growth story isn't busted just yet. If that proves to be the case, then daring investors could be poised to make a bundle by buying today.

First, let's quickly review what has gone so horribly wrong at Under Armour in recent quarters. The disappointing results can be squarely blamed on lower than hoped for sales in North America, which is where Under Armour generates the majority of its revenue. Last quarter, North American sales declined by 1% while expenses simultaneously rose. The combination caused Under Armour to report a net loss, which is hardly going to get growth investors excited.

Why are North American sales struggling? Under Armour stated that the downfall was caused by the bankruptcies of a few key customers. Given the slew of retailers that have gone belly-up recently -- The Sports Authority, Sports Chalet, Bob's Stores, and Eastern Mountain Sports immediately come to mind -- I for one can understand the comparison struggle.

Despite the bummer headline numbers, the report did contain a few nuggets that should give long-term investors hope. International sales soared 52% and now comprise more than 20% of total sales. Direct to consumer sales and accessories also rose by double-digits. Those figures hint that Under Armour's brand is still top of mind with some consumers.

While Under Armour's near-term results will likely remain challenged, I think the picture will start to look bright again once the bankruptcy headwinds abate. Thus, as long as you can approach this stock with a long-term mindset, I think you'll do just fine in the long run.

Turn your smartphone-obsessed generation into profits

Travis Hoium (Apple): If you're a recent college graduate, you know the disruptive force Apple has had on education and the way consumers are buying and using products. iPads have become commonplace in schools, Apple Pay may have replaced the need to carry a credit card, and mobile apps will keep your work email and critical data close at hand at all times (which wasn't standard at most workplaces just a few years ago).

What makes Apple a great buy for young investors is that it's a company young people know well, so it's easy to follow, and it has great fundamentals at a good value. Apple is currently generating about $50 billion in free cash flow per year, on top of the $257 billion it already has on hand. And with shares trading at 18 times trailing earnings, without even accounting for the cash on hand, the stock is a good value for young investors.

Apple has had an incredible run of products and may not always be as popular as it is today, but it has built such a powerful ecosystem that years from now, it will still be making money from customers upgrading phones or buying services for their devices. And given the company's visibility and strong finances, this is a great stock for building an investment portfolio.