Bitcoin is a digital cryptocurrency with no intermediaries or banks necessary to conduct transactions. It was designed as open-source software in 2009 by an individual or group known only as Satoshi Nakamoto with the intention to minimize transaction costs and deregulate currency. The cost of a bitcoin has skyrocketed this year. When the calendar rolled over to 2017, the price of one bitcoin was just a shade under $1,000. As I write, the price of bitcoin has skyrocketed to almost $7,500!

This huge increase in price has led some investors to not only some to wonder if they should invest in bitcoin, but even how to invest in bitcoin in the first place. After all, it's not like they can purchase a bitcoin at their brokerage or bank. Heck, one can't even buy a bitcoin at Amazon.com, and Amazon sells everything! With this question in mind, let's look at some different ways investors can buy bitcoins or otherwise gain exposure to this unique asset class.

(If you're still a little confused about what exactly a bitcoin is, here is an excellent primer on the unregulated virtual currency by fellow Fool Matthew Frankel). 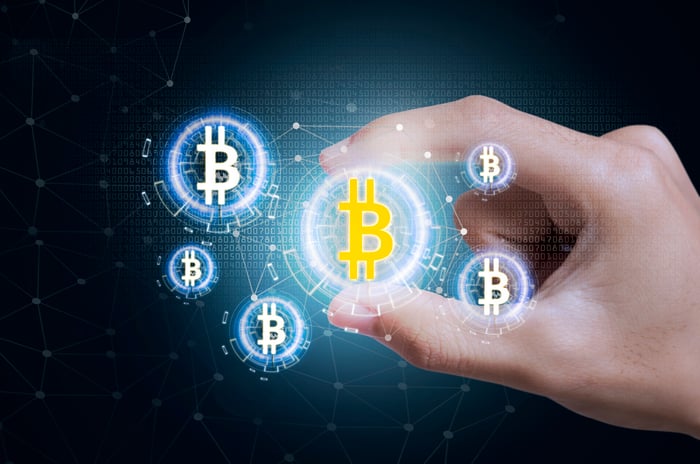 There are several ways for investors to buy bitcoin. Image source: Getty Images.

What's in your (bitcoin) wallet?

The most popular way to buy bitcoins is through bitcoin wallets, digital wallets for the exclusive use of bitcoins. There are many different types of bitcoin-based wallets and you need to be very careful to choose something that will best meet your needs. Some bitcoin wallets are device-specific, while others are web-based.

Coinbase is one of the most popular digital wallets used to purchase bitcoins. As with almost any of these wallets, customers must sign up for an account online and then link a bank account. If they just want to buy, a valid credit card number will do. Coinbase accepts Mastercard and Visa. Before any bitcoin transaction, Coinbase shows users the current value of the digital currency in U.S. dollars. When making a withdrawal from a Coinbase account, account holders can choose to have the funds go to either a linked bank or PayPal account.

Since third-party cryptocurrency wallets have been famously known to be hacked resulting in a permanent loss of funds, investors must be careful to properly secure their bitcoin wallets. Remember, bitcoins are not stored in FDIC-insured accounts and most third parties do not offer insurance in case of theft or fraud. How bad is this problem? Last August, Reuters reported that a full third of bitcoin exchanges had been breached.

Security is vitally important in keeping bitcoin accounts safe. Back-ups are critical in cases of computer crashes or stolen wallets. Wallets must be encrypted so anyone withdrawing bitcoins from your account must know a password. Whatever you do, don't forget your password! Many wallets offer two-factor authentication, where a unique code is texted or emailed to you before withdrawals can be made. Bitcoin passwords are also critical as, unlike bank accounts, there is no customer service line to reset your password. Bitcoin.org recommends either memorizing the password or writing it down and storing it in a safe place.

There are other ways to purchase bitcoins; some more exotic than others. Bitcoin Depot, in conjunction with the bitcoin wallet Airbitz, allows users to buy bitcoins with cash at dozens of special ATM locations spread across six states: Alabama, Florida, Georgia, Massachusetts, Tennessee, and Texas. After setting up an account, all customers need to do is deposit cash in the ATM and scan a QR code with a special scanner attached to the ATM and, within minutes, the purchased bitcoins will be available in the Airbitz account.

The most convenient way to gain exposure to bitcoins is through the Bitcoin Investment Trust (OTC:GBTC). This fund was created so that buying bitcoins could be as easy as buying any stock or ETF share. All people have to do is buy shares through their regular broker using the ticker symbol. Each share represents about one-tenth of a bitcoin. But, as fellow Fool Jordan Wathen has pointed out, this convenience comes at a steep cost. According to his calculations, a share often costs more than the value of the underlying bitcoin.

As with any security, one should do their due diligence before buying bitcoins. Not only on its worthiness as an investment, but on the right exchange platform that best meets your security and convenience needs.