Honda Motor Company (NYSE:HMC) said on June 8 that it is targeting the year 2025 for the introduction of vehicles with self-driving systems.

That's a few years later than the dates most of Honda's global rivals are targeting for the launch of vehicles with similar capabilities. Has Honda fallen behind? Or is it taking a different road, as it often has throughout its history?

It's possible Honda's technology push is lagging some rivals'. But it's also true that Honda is taking a different road from many rivals, one that focuses on individual buyers' needs rather than on urban fleet applications of self-driving technology -- and that might explain why it's anticipating a longer path to market. 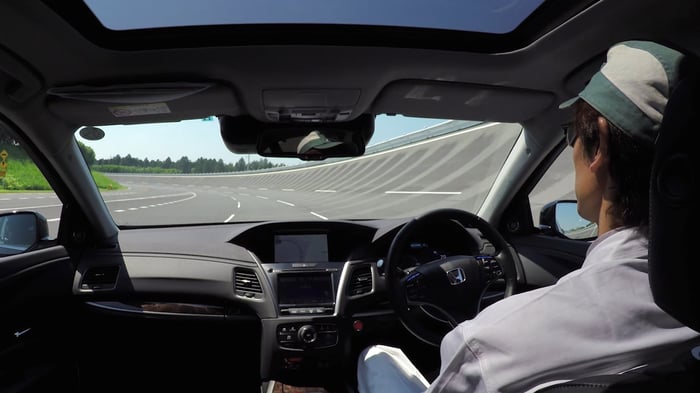 What Honda said about its autonomous-vehicle plan

The announcement was made by CEO Takhiro Hachigo at a press conference in Japan:

We will strive to achieve the technological establishment of Level 4 automated driving for personal car use by around 2025. We are striving to provide our customers with a sense of confidence and trust by offering automated driving that will keep vehicles away from any dangerous situation and that will not make people around the vehicle feel unsafe.

("Level 4" refers to a system that can automatically drive the car in most, but not all, situations. Generally, a Level 4 system is one that may require a human to take over in severe weather or when it's outside of a mapped area. Click here to learn more about the levels of self-driving technology.)

Honda had previously announced that it will have "highly automated freeway driving capability," a Level 3 system, available in Honda and Acura vehicles by 2020. The new target for a Level 4 system was announced as part of its "2030 Vision" strategy plan, which also includes a big move into electrified vehicle drivetrains and other technology initiatives. 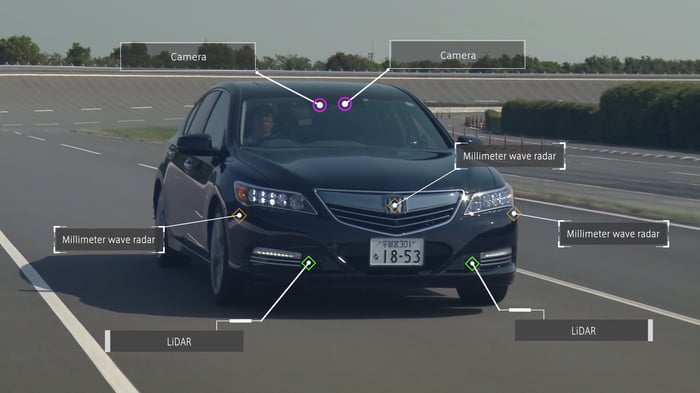 What we know about Honda's technology

The second vehicle was used in a simulated urban setting. It had cameras and Honda's latest artificial-intelligence "brain," with deep-learning capabilities -- but no LiDAR and no GPS. The clear message: Honda has a handle on the heavy-sensor approach, but is also working on something smarter.

Honda has relationships with several key players in the emerging autonomous-vehicle technology space, including Mobileye (NYSE: MBLY) and NVIDIA (NASDAQ:NVDA), but it's not clear which companies provided the components of the two systems it demonstrated on June 8.

Honda emphasized that the upcoming Level 4 system will be for "personal car use." Some other automakers, including Ford Motor Company (NYSE:F), have said that they plan to introduce Level 4 systems earlier -- but for fleet use, not personal use.

General Motors (NYSE:GM) hasn't announced a plan, but its current development arc (and the design of its self-driving "platform," the Chevrolet Bolt EV) suggests a focus on urban ride-hailing and car-sharing applications. The recent decision by Alphabet's (NASDAQ:GOOG) (NASDAQ:GOOGL) Waymo self-driving subsidiary to partner with ride-hailing company Lyft suggests that it's thinking in a similar direction right now.

Honda's focus on individual users is a significant difference that may shape its technology choices -- and may explain its later target date. Honda has previously argued that self-driving vehicles need vehicle-to-vehicle communication capacity, or "V2V," to be truly safe. V2V technology is just beginning to come to market now.

An automated-driving system designed around a specific urban environment (for use by a ride-hailing company, for example) could rely on a highly detailed 3D map of that environment. It might not work elsewhere. The strong hint in Honda's statement is that its Level 4 system won't be "geofenced," or limited to mapped areas -- arguably a more advanced system that may take longer to perfect.

What's next for Honda?

Honda reiterated its plan to have a system capable of "highly automated freeway driving" available in Honda and Acura vehicles by 2020. Between now and then, it said that it will continue to ramp up the sophistication and availability of its advanced driver-assist systems.