Investors should begin valuing bank stocks according to earnings, not book value.

When most analysts and commentators, myself included, have talked about bank stock valuations over the past eight years, the conversation has pivoted around the price-to-book-value ratio. But it's time to change that focus. The metric to watch now is a bank's price-to-earnings ratio, or P/E ratio, which is how stocks in other industries are generally valued.

When to use the price-to-book-value ratio

It may seem odd that analysts would switch between valuation metrics when it comes to bank stocks. Yet there's good reason for doing so, depending on where the economy is at in the business cycle. 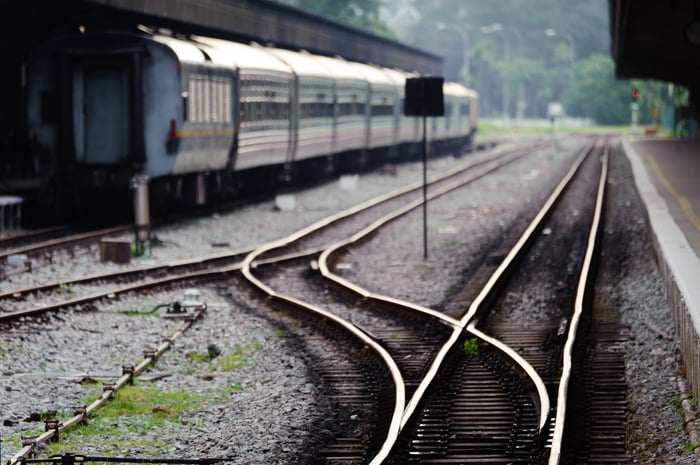 It's time to changes tracks when it comes to valuing bank stocks. Image source: Getty Images.

When the economy is slowing or contracting, which is what happened in the wake of the financial crisis, bank earnings are decimated by elevated loan losses. These will often more than eat up a bank's earnings, thereby leading to actual losses on the bottom line.

Losses are problematic when it comes to the P/E ratio, which is calculated by dividing a bank's price per share by its earnings per share. A negative number in the denominator thereby renders the result nonsensical. In order to compare valuations across banks in the midst of a downturn, then, analysts must use an alternative measure -- namely, the price-to-book-value ratio.

On top of this, because the typical bank is leveraged by a factor of 10 to 1 or more, a mere 10% decline in the value of its assets, which include loans and fixed-income securities, can render it insolvent. The price-to-book-value ratio does a better job accounting for this possibility than the P/E ratio does.

When the P/E ratio is ideal

In 2016, all two dozen banks on the KBW Bank Index reported positive earnings. In terms of the three banks I mentioned earlier, for instance, Capital One earned $3.8 billion, Huntington Bancshares reported $711 million in net income, and Regions Financial netted $1.2 billion, according to YCharts.com.

This makes the P/E ratio relevant, again. And even more than that, it makes it a better gauge of value. This follows from the fact that long-term shareholder returns are principally a function of earnings. The more a bank earns, the higher the return, and vice versa.

Additionally, because other stocks are valued according to the P/E ratio, switching back to this metric enables investors to compare bank stocks to other types of stocks more seamlessly. Looking at the market right now, this would suggest that bank stocks continue to be attractively priced, as the average forward P/E ratio on the KBW Bank Index is 15.5, while the average forward P/E ratio among S&P 500 stocks is 35.3.

Consequently, until we hit another downturn, I'd urge investors to think about bank stock values in terms of the P/E ratio as opposed to the price-to-book-value ratio. Not only is the former a more accurate reflection of potential value creation, but it also suggests that there may still be bargains to be found among banks.