Amazon is shelling out $13.7 billion for Whole Foods, but the e-commerce giant's market cap has already swelled by more than that sum.

Whole Foods (WFM) investors aren't the only ones cheering the grocer's sale to Amazon.com (AMZN -1.44%).

Amazon stock was up as well, with its shares tacking on more than 3% as of noon EDT today. In other words, today's $14 billion gain in Amazon's market capitalization, which is now up to $475 billion, is greater than the $13.7 billion the company agreed to pay for Whole Foods.

That doesn't mean that the share appreciation itself pays for the deal directly, as Amazon offered all cash in the transaction, but it shows how small the price is compared to Amazon's market value. It also means that Amazon could pay for the acquisition with just a minor stock dilution, which shareholders would no doubt eat up. In fact, in a way, Amazon is already doing that.

Amazon founder and CEO Jeff Bezos told his investors from the beginning that he was building the company for the long term. Bezos has invested heavily in emerging markets such as e-commerce, video streaming, and cloud computing, forgoing profits to instead build out market share and a network of competitive advantages. He is disdainful of the usual Wall Street obsessions such as quarterly profits, and does not even participate in quarterly earnings calls, unlike nearly every other CEO of a publicly traded company. In other words, Bezos asked investors for a special privilege -- time -- and he has more than returned the reward, making early investors rich: The stock is worth more than 500 times its IPO price, and his company is now one of the most valuable in the world.

Because Bezos has built his company on creating long-term value and he's delivered on that promise without much profit, Amazon's valuation is divorced from many of the conventional Wall Street metrics. For example, while most large companies make concerted efforts to buy back shares to inflate the stock price and pay dividends to reward shareholders, Amazon has done the opposite, using its high share price to compensate employees to avoid additional cash expense. Last year alone, the company issued nearly $3 billion in stock-based compensation, saving cash for things like acquiring Whole Foods. 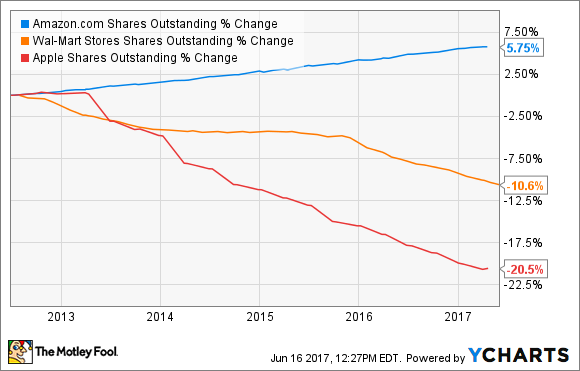 Amazon has been so successful at carrying out Bezos' long-term vision that investors extend him and the company the leeway to take the business in virtually any direction he wants. That phenomenon was on display again with the Whole Foods deal. For a company with net income of $2.6 billion over the last year, a $13.7 billion deal would normally be heavily scrutinized by Wall Street, but because Amazon can so easily justify that sum with a modest uptick in its share price, investors are content to cheer on a deal that appears to be the latest component in Bezos' sustainable-competitive-advantage machine.

Wal-Mart Stores, on the other hand, received a much more skeptical response from Wall Street when it agreed to buy Jet.com for $3.3 billion last year. But Wal-Mart, like most of the stock market, trades according to conventional metrics.

Amazon has earned that long leash along with the benefit of the doubt. While the company has resisted making secondary stock offerings, it could always do so if it needs to replenish its coffers to make another Whole Foods-size acquisition.

As the reaction to today's big buy shows, Amazon investors are not complaining.