Please ensure Javascript is enabled for purposes of website accessibility
Log In Help Join The Motley Fool
Free Article Join Over 1 Million Premium Members And Get More In-Depth Stock Guidance and Research
By Harsh Chauhan – Jun 20, 2017 at 8:53AM

Qualcomm's latest product could be the key to smart-home riches.

Shares of Qualcomm (QCOM -3.44%) have struggled this year, thanks to a bunch of legal issues, but the chipmaker's latest move to target the fast-growing smart-home market could spell good news for investors. In late May, the chip giant announced a new smart-router technology that strings together different smart-home platforms into one.

TechSci Research forecasts that the global smart-home market is expected to surpass $60 billion by 2021 thanks to the increasing adoption of smart devices that allow people to control technology in their home via a device like a smartphone. Qualcomm's move to attack this opportunity could lead to big financial gains in the long run. 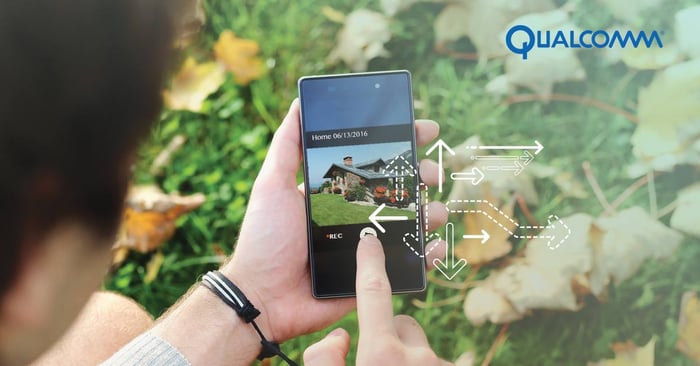 Qualcomm is attacking the heart of the smart-home devices market with its mesh networking platform and reference router design. Mesh routers play an important role in homes where connectivity is an issue because of Wi-Fi dead zones, rebroadcasting the connectivity from a modem through multiple access points.

Mesh routers such as Eero, Netgear Orbi, and Luma have been gaining in popularity since last year and all of them are powered by Qualcomm chips. Now, the chipmaker has gone one step further. Its reference design marries the concept of mesh routers with virtual voice assistants by offering support for a six-microphone array and several trigger words.

As a result, customers will no longer need a separate virtual-assistant device such as Amazon.com's Echo or Alphabet's Google Home to talk to their home appliances. Instead, they can speak straight to the router to perform the desired functions, since Qualcomm's reference design integrates the necessary radios, software, and voice controls.

In addition, Qualcomm's design supports the popular ZigBee smart-home connectivity protocol that a number of device makers use.

What's more, Qualcomm's mesh reference design could also support other platforms such as Samsung's SmartThings and Wink, turning it into an all-in-one smart-home solution.

In fact, Samsung has already started selling the Connect Home devices, pricing them between $169.99 and $379.99. But Qualcomm's offering is different in the sense that the chipmaker is enabling voice assistance in the router pods through software support, providing noise cancellation, voice recognition, and cloud connectivity to Amazon, Google, and other platforms.

Qualcomm is also providing hardware support through its reference design, which could potentially accelerate its time to market in this space, since it already has existing relationships with router makers who could use the chipmaker's technology. What's more, investors shouldn't rule out the possibility that Qualcomm could attack the fast-growing router market that could hit $23 billion in revenue by 2020, according to one estimate.

Hitting smart-home hubs and routers could open up a substantial licensing opportunity for the company, setting Qualcomm up for strong revenue growth in the long run.