Ford Motor Company (NYSE:F) said on Tuesday that the North American version of its upcoming all-new 2019 Focus will be built in China.

That was a surprise. The new Focus will be the first-ever Ford to be imported to the United States from China. It's a huge change: The current Focus is built in Michigan, in a Ford factory near Detroit.

Why is Ford making a move that's likely to bring political heat in the current environment? The answer lies in one simple chart.

This is why Ford is moving the Focus to China

Before I show you the chart, here's some background. 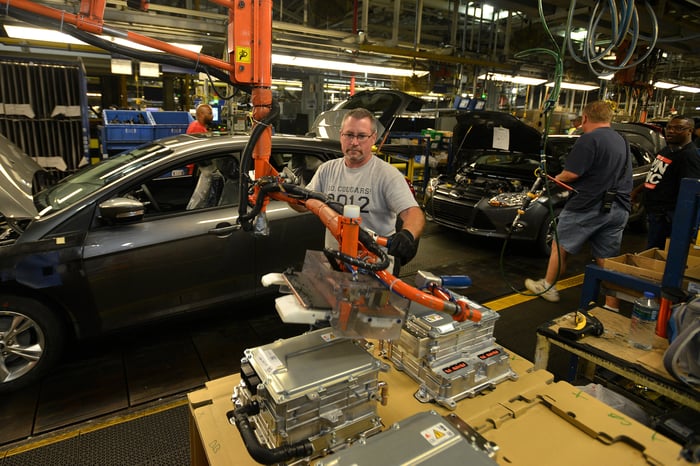 Ford Focuses sold in the U.S. are built at Ford's Michigan Assembly Plant now, but they'll need to move elsewhere next year to make room for production of the Ranger pickup. Image source: Ford Motor Company.

Clearly, Focus production needed to go elsewhere. That probably meant moving it outside of the United States. Like other automakers, Ford wants to use its higher-cost U.S. factories to build its most profitable products (like SUVs and pickups) while moving less-profitable sedan production to lower-cost factories in other countries.

Ford was expected to build the next-generation Focus in its factory in Hermosillo, Mexico, where the midsize Ford Fusion and Lincoln MKZ are built. But it's moving Focus production to China instead, probably to a factory in Chongquing that already builds the Focus for Chinese customers. Here's the chart that shows why: 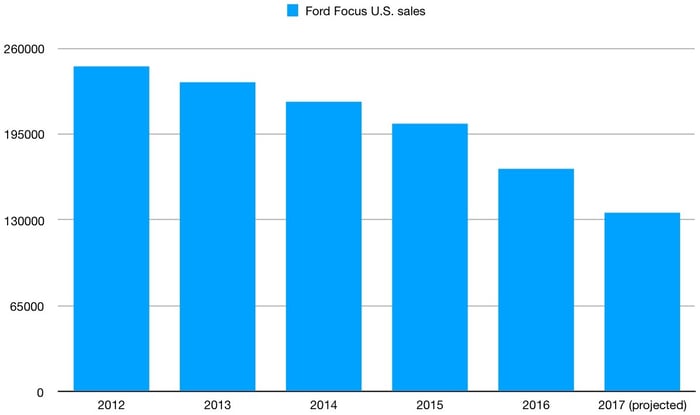 Data source: Ford Motor Company sales reports. The projected 2017 sales total assumes that Focus sales will decline 19.7% from 2016 levels. U.S. sales of the Focus were down 19.7% this year through May.

As you can see, Focus sales have declined every year since 2012, and they're down almost 20% from 2016 levels so far this year. That decline isn't unique to the compact Ford: Industrywide sales of car models have declined over the last several years as more and more buyers have chosen crossover SUVs instead of cars.

How does that sales decline explain why Ford will build the next Focus in China? Like most industry observers, Ford has concluded that the sales trend favoring SUVs over cars isn't a fad, but a significant (and probably enduring) market shift.

Ford isn't going to discontinue the Focus: It's a huge seller in Europe and China, and while U.S. sales have fallen, they're still significant. But the market trend away from cars, particularly smaller cars like the Focus, means Ford will have to fight harder for each sale. Translation: Ford will have to price the next Focus aggressively, at least in the U.S.

That, in turn, means Ford needs to lower its cost of production as much as it can, while still delivering a high-quality, desirable product. That's why the next Focus will be built in China, where Ford has advanced factories that can produce high-quality vehicles at lower cost than it could in the U.S. or Mexico.

Will buyers protest a Chinese-made Ford? They might, but I don't think there will be much of a fuss. General Motors (NYSE:GM) already imports a vehicle to the U.S. from China: the Buick Envision SUV. The Envision isn't a big seller, but dealers say the SUV's Chinese origins haven't been an issue for buyers. It's likely that the success of Ford's next Focus will have much more to do with the merits of the car itself -- and demand for small cars generally -- than with the location of its factory.