Teladoc Inc. (NYSE:TDOC) is the nation's leading provider of doctor visits by telephone and video conference, and it's well positioned to benefit from a shift toward on-demand healthcare. Is this fast-growing company worth owning in your portfolio?

Teladoc contracts with employers and healthcare plans to offer its ambulatory-care and behavioral-healthcare services to their employees and members, and currently, its 7,500 clients includes 30 healthcare plans and 220 Fortune 1,000 companies. 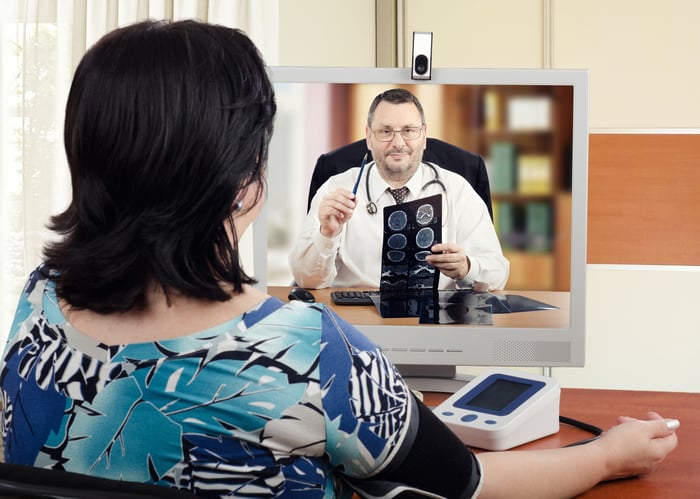 Although Teladoc isn't the only provider of telehealth services, it is the biggest provider. Its market share is roughly 75%, and it's three times bigger than the next three competitors combined. The company's total membership has increased from 6.2 million people to 17.5 million, and the number of total annual visits has grown from 127,000 to 952,000 since 2013.

The rapid acceleration in members and visits has caused revenue to rise at a compounded 80% rate annually during the period, and in 2016, Teladoc reported sales of $123 million, up 60% year over year. In January, it issued guidance for sales of at least $180 million in 2017. It's also forecasting that total membership will grow to 21.5 million people and that visits will eclipse 1.4 million this year.

Clearly, the company's enjoying pretty remarkable growth, and it doesn't appear that it's anywhere near tapping out its opportunity. Every year, there are 1.25 billion ambulatory-care visits in the United States, and roughly one-third of those visits involve issues that Teladoc could address.

There are also 168 million behavioral-health visits in the U.S. every year, and Teledoc could handle about 80% of those visits. Across both markets, Teladoc estimates the total addressable opportunity at $29 billion, and so far, industrywide penetration of that opportunity is less than 1%.

A big knock against Teladoc is that big spending on acquisitions, marketing, and personnel is still causing it to report losses. Those expenses aren't going to disappear anytime soon, but there is some evidence that the company's making progress on getting itself into the black.

In Q1, its adjusted earnings loss before interest, taxes, depreciation, and amortization improved to $9 million, from $12 million in the same quarter of 2016, and that has the company thinking it can break even on an EBITDA basis by the end of this year.

Teladoc just announced that it's acquiring Best Doctors, in a cash and stock deal valued at $440 million. Best Doctors works with 50,000 medical experts and 800 clients, and it did $92 million in sales last year. The deal expands Teladoc into specialty medicine and critical care of tough-to-treat injuries and illnesses. For example, cancer accounts for 16% of Best Doctors' cases.

Physicians providing advice on the Best Doctors platform have their peers ranking them in the top 5%, and that advice is informed by analytics that provide evidence-based treatment recommendations. Overall, patients use Best Doctors to help evaluate multiple treatment alternatives, come up with new treatment plans, and answer questions before surgery. Historically, its experts have recommended a different treatment 69% of the time, and they change a patient's diagnosis nearly 40% of the time.

In the short term, the deal could provide a slight tailwind to Teladoc's bottom line, because Best Doctors' annualized adjusted EBITDA clocked in at about $9 million in Q1. However, the real opportunity is the potential to cross-sell services to more clients and to provide soup-to-nuts healthcare regardless of a patient's diagnosis. It will be a while before we learn if this combination is a success, but we should get more insight into Teladoc's plans soon. Management has said it will update its 2017 financial outlook in August, and this fall, it plans to spell out in more detail the sales and cost synergies it hopes to benefit from.