PayPal (NASDAQ:PYPL) stock has had a good year so far, rising more than 30% in value -- and according to one analyst, it's about to get even better.

This morning, investment banker Pacific Crest announced it is upgrading shares of the online payments specialist from sector weight to overweight (i.e., buy), and assigning a target price of $60. If Pacific Crest is right about that, PayPal investors can look forward to a 14% payday as the stock fulfills its potential. How will it do that? 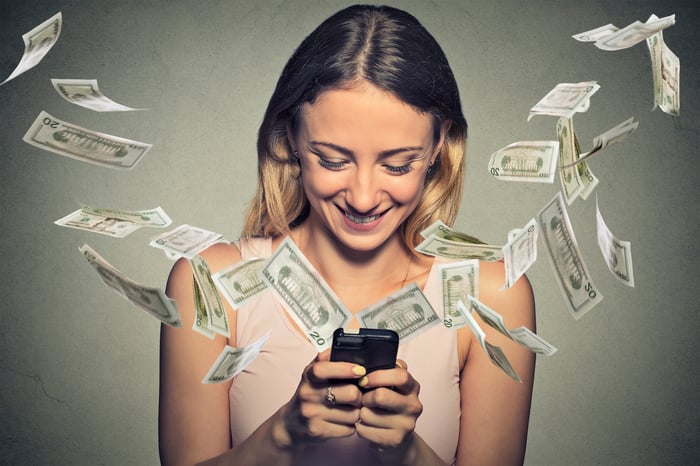 1. Investing in the future

Web-based businesses like PayPal are favored by tech investors for their asset-light business models -- and this is a key reason why Pacific Crest likes PayPal, as TheFly.com reports this morning. Problem is, PayPal hasn't been particularly "light" on its asset spending lately.

To the contrary, according to data from S&P Global Market Intelligence, PayPal has spent nearly $2.8 billion on capital investment over the past five years -- nearly as much cash as the company generated last year -- which has dragged down free cash flow and limited the firm's profitability. But according to Pacific Crest, that's about to change.

In a write-up covered on StreetInsider.com this morning, Pacific Crest explains: "Following a broad technology investment," PayPal is now on the verge of "harvesting" the benefits of integrating its several payment methods to offer customers the benefits of "Choice" in how they pay their bills, share money with friends and family, and accept payments as well.

Offering choice of paying via PayPal online, Venmo (acquired by PayPal along with Braintree in 2013), Android Pay, and other options, PayPal is gradually taking away any reason for its customers to leave the service in favor of some other option offered by somebody else. Pacific Crest predicts that this will make PayPal's service stickier, resulting in "better net adds, churn, opex" for the stock, even as PayPal ventures forth to explore its "international opportunity" to grow outside the U.S., and potentially introduces a "Virtual Cash Card" for customers to use.

3. What it means in dollars and cents

With lower "opex" -- operating expenses, which are in part reflected in all the capital spending PayPal has been doing -- Pacific Crest believes PayPal can become much more profitable than anyone else on Wall Street expects.

According to Pacific Crest, PayPal could conceivably report profits as high as $1.77 this year (Wall Street is expecting $1.32 per share, GAAP) and perhaps $2.24 per share in 2018 (consensus estimates predict profits of $1.65).

Are these profit predictions enough to make PayPal stock a buy? Maybe not -- but also maybe so. 2017 profits of $1.77 per share on PayPal's current stock price of $52.52 works out to a valuation of nearly 30 times earnings on PayPal stock. That seems a bit pricey given analysts' consensus projections of a long-term earnings growth rate of 17% at PayPal. It works out to a PEG ratio of 1.75.

But looked at another way, PayPal could be cheaper than it appears. Consider: PayPal reported GAAP profits of $1.4 billion over the past 12 months, but PayPal generates a whole lot more cash profit than its income statement lets on. Free cash flow (FCF) for the past 12 months amounted to $2.5 billion.

Additionally, while PayPal has a market cap of $63.1 billion, its ability to generate a lot of cash has resulted in a large cash balance -- $8.9 billion -- piling up on its balance sheet today. This gives the stock an enterprise value (EV)  of only $54.2 billion. Divide PayPal's free cash flow into its enterprise value, therefore, and what you wind up with is a stock selling for less than 22 times annual cash profit.

That may still not make PayPal stock cheap, exactly, on a 17% growth rate. But if PayPal grows faster than Wall Street expects, as Pacific Crest is predicting, the stock could still be worth a look. Additionally, the same analysts who predict 17% long-term growth for PayPal are also predicting that the company's profits will grow 25% next year, and 22% the year after that -- growth rates that can easily justify an EV/FCF ratio of 22 on PayPal stock if the company manages to grow faster, and longer, than Wall Street expects.

I think Pacific Crest just might be on to something here. PayPal stock is worth a good, hard look.