Donald Trump campaigned on reining in sky-high drug prices, and as recently as January, he said the industry was "getting away with murder." His tough talk has been bad news for biopharma stocks. However, an executive order that he could soon sign is reportedly friendlier to the industry than was expected. Is it time to buy biotech again?

The market for prescription pharmaceuticals is massive and growing. Globally, prescription-drug sales are expected to increase by 6.5% annually to $1.06 trillion in 2022, according to EvaluatePharma. 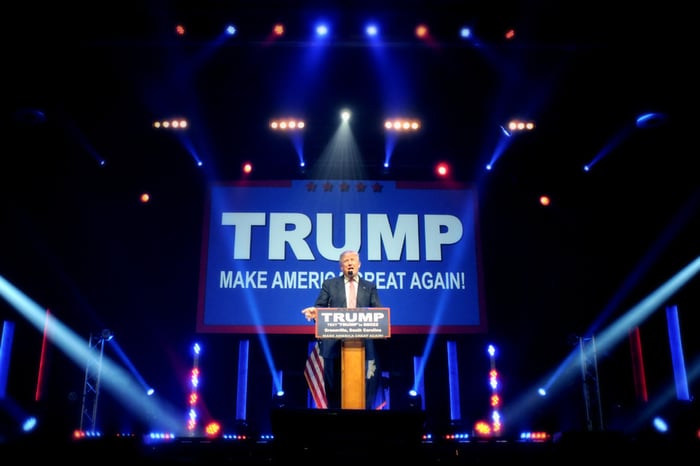 In the U.S., low-cost generic drugs represent nearly 90% of prescription-drug volume, yet high-cost specialty drugs used in indications such as cancer account for an increasingly larger share of total spending, and as a result, drug sales of $333 billion last year make the U.S. the world's biggest market. Specialty drugs often cost over $10,000 per month, and increased demand and higher prices caused a double-digit increase in spending on them last year, according to Express Scripts.

Sky-high specialty-drug prices are a problem, but what's really drawn the ire of patients, doctors, and policymakers is a "buy, reprice, and relaunch" strategy that some drugmakers have used to juice sales and profit.

For example, "pharma bro" Martin Shkreli made headlines in 2015 when his company acquired Daraprim, a decades-old drug, and then increased its price by 5,000%. Similarly, pharmaceuticals giant Valeant (NYSE:BHC) came under heavy fire when it acquired two heart-disease drugs in 2015 and then increased their prices by hundreds of percent shortly thereafter.

More recently, Mylan (NASDAQ:MYL) took heat in 2016 after media reports revealed that it had been steadily increasing the price of its life-saving EpiPen since acquiring it in 2007. Between 2007 and 2016, EpiPen's price for a two-pack grew from $94 to over $600, according to the Elsevier Gold Standard Drug Database.

Unsurprisingly, the uproar surrounding price increases made drug pricing a major focus of the 2016 U.S. presidential race. During the campaign, both Trump and Hillary Clinton proposed various policies to curb costs, including reimporting drugs from countries where they're cheaper, such as Canada, and giving Medicare more authority to negotiate prices with drugmakers.

For investors, the risk that pricing policies like these could eventually lead to profit-busting price controls put a lid on biopharma stocks.

Ironing out the details

This week, The New York Times and other outlets reported that drafts of an executive order Trump may sign soon includes ways to reduce drug costs that are less draconian than feared, and that could be good news for biotech stocks. Following these reports, biotech stocks were among the stock market's best performers. 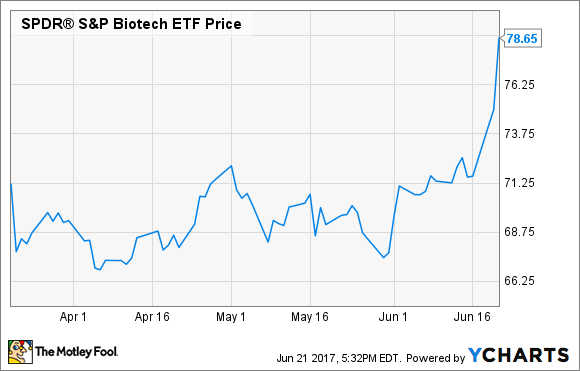 Included in the order are policies that accelerate clinical-trial and drug-approval timelines and that deregulate the industry. It proposes changes to trade agreements that could strengthen patent protection overseas, and it encourages value-based drug pricing so payers only pay (or pay more) when drugs work.

It even suggests the use of Treasuries to pay for expensive treatments for people on government insurance programs.

Shorter clinical-trial timelines can lower R&D costs, and faster approvals can increase total drug revenue before patent expiration. Toughening up trade to increase prices overseas could provide a lift to international drug revenue, while value-based strategies could boost prescription volume, particularly if patient cost-sharing with insurance companies falls in tandem. Paying for medicines with Treasuries could also increase prescription volume, by removing bottlenecks associated with tight government budgets, such as at Veterans Affairs.

Ultimately, it's anyone's guess what the final executive order Trump signs will include, or if these policies will lower drug prices in America. Nevertheless, the draft's tone is decidedly less vicious toward the industry than investors have been fearing, and that's why biotech stocks are rallying.