Find out why these companies have done so badly.

Most investors have been happy with the way that the stock market has performed this year. Major market benchmarks like the Dow and S&P 500 have both set numerous all-time record highs over the course of 2017. However, a few stocks have missed out on the rally. In particular, Target (TGT 0.89%), Fitbit (FIT), and Anadarko Petroleum (APC) are all down 30% or more so far this year. Each of these companies has faced some tough conditions in its respective markets, and the question that investors have is whether these losses will get even worse throughout the remainder of 2017. 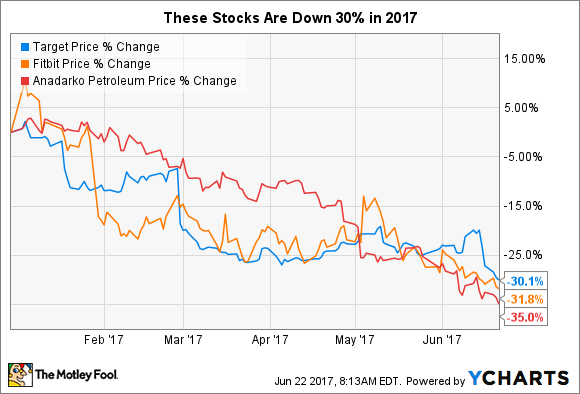 Target has seen a lot of trouble so far in 2017. The company's holiday results from late 2016 were particularly weak, including a 3% drop in comparable-store sales. In addition, the retailer cut its guidance for 2017, citing difficult conditions throughout the retail industry in the face of changing shopper trends and online competition.

Those concerns about competitors got a lot worse in the past week, as Target stock reacted negatively to the news that the largest online retailer and the best-known organic and natural foods grocery chain were combining in a $13.7 billion merger. Given that Target has recently expanded its grocery offerings, shareholders took the news as a direct threat to a major strategic plank upon which the big-box retailer is basing a potential turnaround. The decline might well be an overreaction, but Target still has to deal with changing consumer preferences that are discouraging traditional foot traffic in favor of more convenient shopping options if it wants to avoid deterioration in its core business. 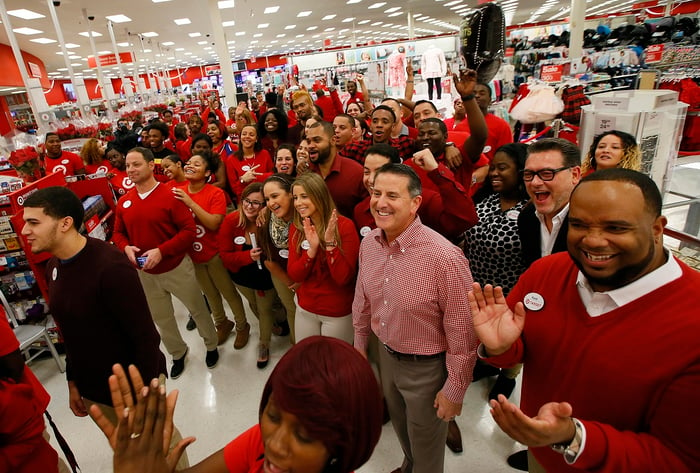 Fitbit also had a rough holiday season, as the maker of wearable fitness devices suffered a 19% year-over-year drop in revenue in the fourth quarter on a decline of more than a fifth in the number of Fitbit units sold, compared to just three months previously. Even though Fitbit's newer products gained traction among customers, warranty reserves have been on the rise, reflecting worse claims experience for the device maker than previously anticipated.

Things started looking better for the stock when Fitbit reported first-quarter results. Even though revenue was down more than 40% on a drop from 4.8 million devices sold in the year-ago period to just 3 million, investors were happy that the results weren't worse than they actually turned out. Some shareholders are hopeful that new applications like sleep apnea detection could lift demand for higher-end Fitbit products, but the stock reflects overall skepticism until Fitbit can actually deliver on improved fundamental performance for its business.

The energy market hasn't been friendly to oil and natural gas companies in 2017, and Anadarko Petroleum has had to deal with more than its share of downward pressure as a result. After bouncing back in a more favorable market in 2016, Anadarko has steadily lost ground so far this year, and strategic moves to shift assets from natural gas toward oil through asset acquisitions and sales haven't been able to outweigh the drop in crude oil prices.

Anadarko has also had problems of its own, as an explosion at a Denver-area home was linked to an improperly capped flowline at an Anadarko-owned natural gas well. With the energy company already suffering from tough industry conditions, the expense of complying with an order to inspect all wells located within 1,000 feet of buildings within the state of Colorado will only add to profit pressures going forward. With no relief from the slump in crude in sight, Anadarko could see further losses in 2017.

Quick losses of 30% only happen when major problems arise, and investors need to look at the reasons for holding these stocks in light of their recent declines. You shouldn't necessarily sell a position now, and bargain-hunting investors might well see opportunity in these three stocks. Yet you'll want to understand the background that led to these declines in making a smart decision for your portfolio.