The automaker has a huge and sustainable dividend and rock-bottom valuation, but here's why investors are still wary.

You could search long and hard to find a company with these statistics and never come up with an equal:

After the eight-year bull market we've experienced, you'd expect that only a small, under-the-radar company could possibly possess these traits. Yet if you buy Ford (F -7.61%) stock today, this is exactly what you'll be getting.

It's enough to make you wonder: Am I missing something? 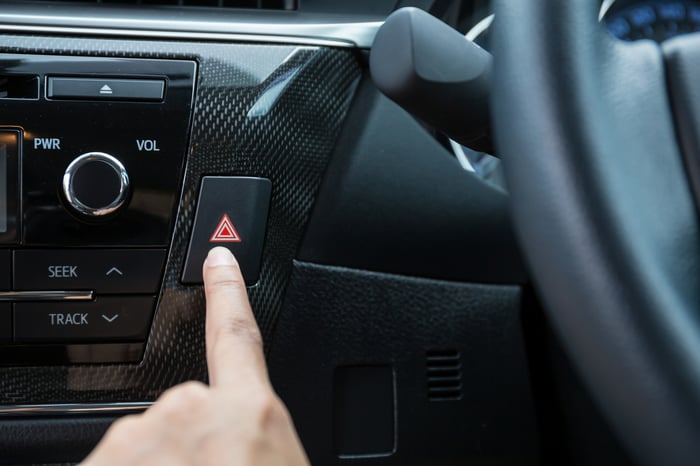 Let's investigate the challenges the company is facing and see just how safe the stock and its dividend really are.

Of cycles and automation

Recently, Fool auto expert John Rosevear highlighted the unusual circumstances surrounding Ford's stock. As with all other auto companies, he pointed out, investors are worried that Ford has climbed to the peak of new auto sales and is now in a cyclical decline.

Unlike other auto companies, however, Ford's stock is trading for just 3.5 times free cash flow. General Motors, for instance, is trading for 5.5 times its trailing free cash flow. That might sound like a small difference, but if Ford's ratio rose to match GM's tomorrow, the stock would jump an astounding 57%.

That brings us to our second point: Lots of investors are worried about what the future of driving in America -- and the world -- might look like. John pointed out that Ford's slow and unclear moves into autonomous driving were part of the reason the board chose a new leader in Jim Hackett last month.

Hackett led the company's efforts at self-driving cars -- a clear signal that the board recognizes this is where the future lies. If mainstream predictions about autonomous driving are correct, well-placed dollars now should leave Ford in a competitive position a decade from now.

However, there are also some think tanks that believe the switch over to autonomous, electric fleets of vehicles will happen much more quickly. Just last month, RethinkX put out a paper saying that most mainstream predictions would be proved wrong by an order of magnitude, and that our transition to such fleets would happen very quickly.

The impetus, that paper argued, would be a dramatic drop in costs. Those drops would come from:

Perhaps most alarming for investors, RethinkX believes that this transition will be almost complete by 2030, and that the number of cars on American roads will drop by 80%. While Ford is actively pursuing its own AI vision, which includes fleets of cars, such a dip would undoubtedly have a negative impact on top-line growth.

So how safe is Ford's stock?

But here's the thing about RethinkX's paper: It's merely a prediction. While I find the reasoning behind the forecast compelling, any number of variables could get in the way.

It's also difficult to tell just how quickly Ford can transition in the face of future disruption. If we just look at the facts in front of us, Ford seems like a compelling buy: The company has $94 billion in cash on hand, a very cheap stock by traditional metrics, and a payout that -- even after accounting for a huge one-time payment in early 2016 -- has eaten up only a tiny slice of free cash flow.

Looking over the short to medium term, I think Ford's dividend is very safe and that its stock is trading for a very cheap valuation.

I, however, like to buy and hold with my eye toward a decades-long time frame. Given the disruption that autonomous-driving fleets could have on the auto industry, I'm keeping my own skin out of this game.