Find out what's behind the drops for these companies.

The stock market has been roaring to record highs, making most investors quite pleased with the performance of their investment portfolios. But a handful of stocks haven't been as lucky, suffering from a combination of poor industry conditions and company-specific setbacks. In particular, Fossil Group (FOSL -1.79%), Ocwen Financial (OCN 2.07%), and Cenovus Energy (CVE 1.19%) have each lost half their value or more over the course of 2017, and investors want to know whether their struggles are likely to continue throughout the remainder of the year and beyond. 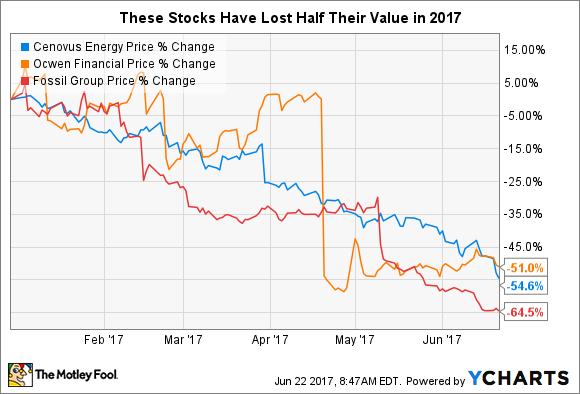 The luxury retail industry has gone through extremely tough times, and watch and accessories specialist Fossil Group has taken plenty of heat. Two poor earnings reports formed the basis for Fossil's share-price drop. In February, the company reported a 3% drop in sales, with declines spanning all of its product categories. Guidance indicated continuing downward pressure on revenue, and things got even worse in May, when first-quarter revenue declines of 12% and a substantial loss led to a huge sell-off in the stock.

International markets have been a source of relative strength for Fossil, with Asia in particular generating growth for the watchmaker. Yet the company has had to come up with a strategy to address the rise of wearable technology, and although Fossil's entries in the wearables space have done reasonably well, long-term competition will force the watchmaker to fight for whatever market share it can gather in the industry.

Ocwen gets a call from the CFPB

Investors in Ocwen Financial came into 2017 hoping that the worst of times were over for the company, which had faced regulatory scrutiny for years. However, those hopes were dashed in April, when the Consumer Financial Protection Bureau filed a lawsuit against the mortgage servicing company, alleging that it had failed to fulfill its duties to customers.

Since then, Ocwen has tried to move forward, responding that the lawsuit is unfounded and politically motivated. Given its past experience with regulators, Ocwen noted that its recent reviews haven't identified any systematic issues with its foreclosure sale processes. Yet even though the stock climbed slightly following its first-quarter earnings report, Ocwen likely won't be able to recover fully until the uncertainty surrounding the eventual outcome of the CFPB lawsuit is better resolved.

Cenovus stock runs out of energy

Cenovus Energy has had to deal with a tough market environment for energy companies, as crude has lost ground throughout the year. But early on, several stock analysts singled out Cenovus, expressing pessimism that the energy company would be able to generate as much free cash flow as its peers and therefore putting Cenovus at a competitive disadvantage. Higher costs at the oil sands specialist make it harder for it to fund capital expenditures from its profits.

That didn't stop Cenovus from making a huge bet with a $13.3 billion purchase of the other half of its joint venture from ConocoPhillips (COP -0.83%). But to do so, Cenovus had to take on substantial amounts of debt, and the subsequent drop in energy prices showed just how risky that move was. The subsequent announcement of the resignation of CEO Brian Ferguson and Cenovus' update on its growth plans have made investors more nervous than ever about the company's future. Cenovus needs more favorable oil and gas prices to help it maximize its potential going forward.

It's natural to see stocks that have lost half of their value as candidates for value investing. But it's essential to look at what's happened fundamentally with such companies to understand the basis for the declines. Even with their drops, these three stocks all have issues that they'll need to resolve before their shares can get back on the upswing.

Why Fossil Group Stock Rocketed as Much as 44% Today
405%