So you say you want to know all about drones? Well, let me stop you right there.

First, what kind of drones do you want to know about? Because there are a lot of different kinds of drones out there... 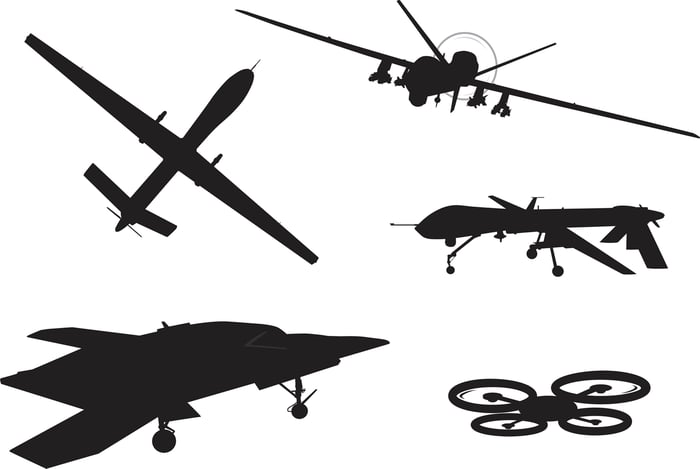 The first thing to know about drones is that they come in many shapes and sizes. Image source: Getty Images.

Drones' definition can be confusing. Defined most broadly, "drone" might refer to any remotely piloted vehicle -- aerial, water-borne, underwater, or ground. Of course, when most people seek facts about drones, they're asking about aerial drones. But even then, there can be confusion among the various types. Let's break them down into two main categories and two subcategories:

And we'll proceed from there.

Military drones break down into two main groups -- those that can kill you, and those that can't. As a general rule, the more lethal a drone is, the bigger it is as well (because an armed drone needs to be big enough to carry heavy bombs and missiles, whereas a surveillance drone may be equipped with little more than the Pentagon version of a GoPro). But the facts don't always support this rule of thumb.

Armed drones range in size from the tiny AeroVironment (NASDAQ:AVAV) Switchblade, which is itself a weapon (i.e., it strikes targets kamikaze-style) to the Textron (NYSE:TXT) Shadow (originally designed as a surveillance drone) and all the way up to General Atomics' MQ-9 Reaper, which weighs two-and-a-half tons, has a 65-foot wingspan, and can carry as many as four Hellfire missiles onboard.

Unarmed drones can be either much smaller -- as small as AeroVironment's Hummingbird, which weighs just 0.66 ounces -- or much larger, such as Northrop Grumman's (NYSE:NOC) RQ-4 Global Hawk and its latest derivation, the MQ-4C Triton maritime surveillance drone, boasting a wingspan of 131 feet. In the realm of military drones, Northrop is pretty much the king of big-drone building, while AeroVironment dominates military contracts awards for the smallest drones.

Generally speaking, larger drone builders (and drone companies) appear to be doing better, financially, than smaller drone builders (and companies). Publicly traded AeroVironment is known to be unprofitable, and The Wall Street Journal reports that privately owned small drone manufacturers aren't doing much better. Larger players such as Textron and Northrop Grumman are both profitable (and selling for P/E ratios of 13.6 and 20.0, respectively), albeit drones remain relatively small niches within their larger businesses.

Still, the facts show that the military drone market is huge, and could become more attractive to investment as the market grows. By late 2015, military drone sales had already reached $6.4 billion globally. To cite just one example, in 2013, France agreed to buy $1.5 billion worth of Reaper drones from just one company (General Atomics) in just one deal.

Market researcher Statistics MRC estimates that military drone sales will grow faster than 20% annually over the next five years to reach $22.15 billion in sales by 2022. Other analysts agree that the market is growing (with an estimated value of $8.5 billion in 2016), but differ on how fast it will continue to grow, guesstimating as low as 5% growth, which implies "only" $13.7 billion in sales by 2026.

Additionally, market researcher Arcluster says that the governmental law enforcement and public safety sectors are expected to spend a further $1.15 billion on unarmed drones in 2022. Indeed, this may be the fastest-growing subsector of the drones market, with Arcluster predicting that sales will roughly double every year for the next five years.

Now let's shift gears, and markets, to the civilian world. Here, too, the definition of drones breaks down into two main groups -- small drones evolved from model airplanes, which consumers purchase to play with, and sometimes-larger drones used by commercial companies as part of their businesses.

Recreational drones generally take the form of "quadcopters," meaning they comprise four spinning rotors providing lift to a central body that may house a camera and/or audio equipment. Controlled via a console or smartphone, they're flown by hobbyists or amateur videographers who want to record their aerial exploits.

Commercial drones take one step up from their recreational brethren and come in a greater variety of form factors (though quadcopters remain prevalent). Their uses range from obtaining video for real estate agents marketing properties to monitoring crop performance for farmers or oil pipelines for oil companies, to inspecting buildings and infrastructure for all sorts of companies that have physical property to maintain (building owners, cellphone tower operators, and on and on).

Add up the opportunities for use of drones by the military, by consumers, and by companies, and how big is the potential market for drones? Goldman Sachs believes that the total global market for drones of all stripes could be worth $100 billion between 2016 and 2020. PriceWaterhouseCoopers foresees a day when the world will be spending $127 billion a year on commercial drones alone.

When it comes to gauging the size of the market for drones, information can be contradictory. Really, no one knows for sure. The one thing everyone seems to agree on, though, and the main thing you need to know about drones is this: The drones market is big, and it's getting much bigger. The fact that folks aren't 100% certain about precisely how big it will end up getting doesn't detract from these facts.