Please ensure Javascript is enabled for purposes of website accessibility
Log In Help Join The Motley Fool
Free Article Join Over 1 Million Premium Members And Get More In-Depth Stock Guidance and Research
By Daniel B. Kline - Updated Jun 27, 2017 at 2:04PM

McDonald's and Dunkin' Donuts are using low prices to lure in new customers.

In the market for people buying a cup of coffee outside their home, it's essentially Starbucks (SBUX 1.19%) and everyone else.

While McDonald's (MCD 1.12%) and Dunkin' Brands' (DNKN) Dunkin' Donuts both now sell premium espresso-based beverages along with other fancy coffee drinks, people don't view those brands the way they see Starbucks. The Seattle-based coffee chain exists in its own world, where it can sell out of $10 cups of whisky-barrel-aged coffee while it opens more than a thousand Reserve stores selling pricier drinks than its normal, already expensive beverage lineup.

Dunkin' Donuts and McDonald's don't have that kind of pricing ability because selling lattes and cappuccinos cannot change how consumers perceive their brands. Neither chain will ever be considered upscale no matter how many trendy items like cold brew they add. The companies do compete on price, but that isn't likely to affect Starbucks. 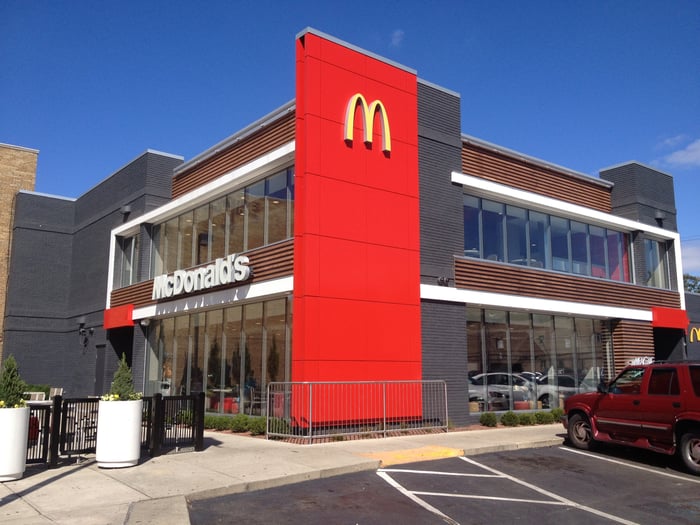 McDonald's has been struggling to compete in the coffee market. Image source: McDonald's.

In addition to Starbucks, McDonald's and Dunkin' Donuts compete for coffee customers with convenience store rivals that offer a Starbucks-like selection and chains including Tim Hortons, which is owned by Restaurant Brands International and has some 700 U.S. locations.

In the realm of pricing, Dunkin's challenge, according to CEO Nigel Travis, is that its store operate as franchises. With labor costs rising in many markets, some franchisees see raising prices as a way to pay for increased operating expenses. That's a strategy that may send customers elsewhere and the chain has been working to keep franchisees in line, the CEO said at a recent conference, Nation's Restaurant News reported.

"They've shown a great understanding of how over-pricing impacts the business," he said, according to the publication, noting that for the past few months franchisees have kept prices in check. In addition, the company is introducing national deals to reverse a slowdown in same-store sales growth over the past five quarters. These include offering its new frozen coffee for $1.99.

"We'll have national value in some form or shape the rest of the year," Travis said. "You're going to see a lot more value oriented pricing from us in the future."

McDonald's also uses a franchise model, but it has not had the same problems with franchisees raising prices. It has, however, had trouble building sales for its McCafe brand, which it has combated by periodically offering very low prices. That included a deal earlier this year when the chain offered any McCafe beverage for $2.

Will cheaper be enough?

McDonald's has used cheap sampling as a way to get consumers to try its coffee offerings. The problem is that while its existing customers may sample a $2 latte, they probably won't buy a full-priced one.

Dunkin' has the same issue as its customers may indulge in the occasional cappuccino or frozen coffee, but mostly they want a regular cup of joe (or an iced coffee). Dunkin' Donuts and McDonald's might keep pushing prices lower to fight rivals, and that would be good for customers who want their coffee, but they simply aren't premium brands and their discounting won't impact Starbucks. Their share will come from the bottom end of the market not the top.