American Outdoor Brands (NASDAQ:AOBC), the gunmaker formerly known as Smith & Wesson, slumped more than 10% over the past 12 months. Most of that decline occurred in November after the elections, which saw gun-friendly Republicans take over both the presidency and Congress. 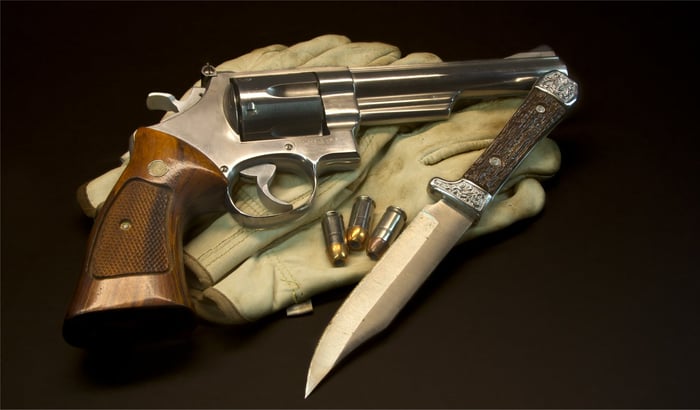 Analysts expect American Outdoor's revenue to grow 22% when it reports its full-year earnings on June 29. But for 2018, analysts expect a 7% tumble. Likewise, its earnings are predicted to rise 29% this year but then drop by 31% next year.

Those upcoming declines have spooked investors, and explain why American Outdoor now trades at just 10 times earnings -- half the industry average of 20 for defense-related companies. But looking further ahead, American Outdoor could eventually bounce back. Let's discuss three potential catalysts that might get the bulls interested in this aging gunmaker again.

Those acquisitions turned its Outdoor Products & Accessories division into a major pillar of growth. During the third quarter, the unit's revenue rose 126% annually (mainly due to acquisitions) and accounted for 16% of the company's top line. On an organic basis, which excludes the impact of more recent acquisitions, the unit posted 4.8% growth.

If American Outdoor continues to expand the accessories business, its dependence on firearm sales should decrease and possibly stabilize its annual sales growth -- which would likely bring back more conservative investors.

American Outdoor couldn't match Sturm, Ruger's 6% gain over the past 12 months. That might have something to do with its dividend -- the company currently pays a 2.8% yield, which is supported by a low payout ratio of 40%.

Sturm, Ruger doesn't consistently hike that dividend every year, since it declares the dividend every quarter based on its earnings, but its yield has remained between 1.5% and 5% over the past five years.

American Outdoor, however, has never paid a dividend. That's unusual when we examine its free cash flow growth over the past 10 years -- which was barely dented by its acquisition spree: 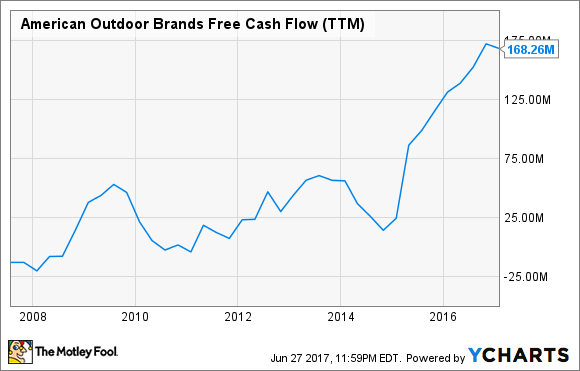 If American Outdoor paid a 3% dividend ($0.17 quarterly), it would use up just 29% of its trailing earnings. That yield, combined with its low multiple, would likely attract income investors and boost its stock price.

3. A Democratic victory during the 2018 midterms

The midterm elections will take place next November. If the Democrats regain a congressional majority, tighter gun regulations could be brought back to the table, which would likely cause firearm sales to rise again.

However, recent studies indicate that a Democratic victory during the midterms isn't guaranteed. Despite a volatile start for the Trump administration, a Gallup poll in May showed that just 40% of Americans viewed the Democratic Party favorably -- down from 45% last November. But if the Democrats can retake the legislative branch, American Outdoor Brands and Sturm, Ruger could rally again.

American Outdoor looks cheap, but I personally don't plan to buy the stock anytime soon. Demand for guns is driven by headlines, politics, and threats of tighter gun control -- and these shifts are very tough to predict.

On the bright side, American Outdoor seems well aware of these challenges. That's why it's expanding its accessories business, and why it launched a new two-year $50 million buyback program back in March. But for the stock to truly get moving again, we'll probably need a decent dividend or a sweeping Democratic victory next year.