Comedian Conan O'Brien once mocked semiconductor giant Intel's (NASDAQ:INTC) cubicle-farm offices for their soulless, gray aesthetic. The company subsequently chose to spruce up its drab digs, but after hearing a story like that, you may not think of Intel as a company whose history is replete with fascinating facts and stories of innovation. However, the chipmaking giant's past, present, and future are far more dynamic and interesting than you might expect.

Here are nine things about Intel that you may not know.

The company's founders at first wanted to name Intel "Moore Noyce," a combination of their last names.  However, when colleagues complained that it sounded like "more noise," they switched to the first parts of the words "integrated electronics," and Intel was born.

Intel's chips helped power the first-ever live video from space to Earth in 1995. Astronauts aboard the Space Shuttle Endeavour streamed a live feed, including photographic images and annotations, to ground control at Houston's Johnson Space Center.

3. Jingle heard 'round the world

Intel is famous for its five-chimed jingle. Officially known as the "Intel Bong" -- insert joke here -- it was composed by Austrian music producer Walter Werzowa and made its debut in 1994. The iconic jingle was so heavily incorporated into Intel's marketing efforts that it was at one point estimated to have been played somewhere in the world once every five minutes at its peak. It's been played over 1 billion times in total.

Observers of the semiconductor market probably know Moore's Law, which predicts that semiconductors' performance tends to double every two years. However, it's less well known that this foundational concept is named after Intel's co-founder, Gordon Moore, who popularized the idea. 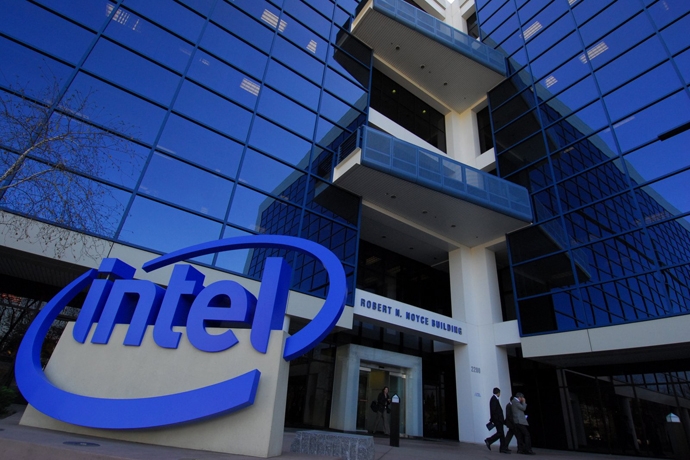 Intel absolutely dominates its two core markets, holding more than a 90% share in the market for PC and server microprocessors. Competitors such as Advanced Micro Devices try to catch up but are rarely able to gain any ground because of Intel's massive research and development budget. For its fiscal 2016, Intel spent $12.7 billion on R&D alone, roughly triple AMD's entire 2016 revenue of $4.2 billion. That's a staggering difference in scale.

Even though many consumers would have a hard time distinguishing Intel's chips from others inside today's computers, Intel enjoys worldwide brand recognition. Global brand consultancy Interbrand ranked Intel as having the world's 14th most valuable brand in 2016, with an estimated brand value of $36.9 billion, situating the company between far more consumer-facing companies Disney (13th) and Facebook (15th).

7. A legacy of leadership

In addition to building one of tech's most iconic companies, Intel's top executives have left a far broader imprint on tech and business over the years. For example, Intel co-founder Bob Noyce mentored a young Steve Jobs, who mentioned Noyce by name in his famous Stanford commencement speech. And former Intel CEO Andy Grove, another longtime Jobs mentor, wrote several best-selling books that are today required reading at business schools around the world, including Only the Paranoid Survive and High Output Management.

The company's legion of fans also extends into the scientific community. In 1987, researchers at the CERGA Observatory named an asteroid "Intel 8080" in the chipmaker's honor. The name comes from the company's 8080 chip, which is widely credited with enabling the personal-computing revolution to take off.

9. Honey, I shrunk the chip

Intel and other semiconductor producers like it have maintained Moore's Law by continually shrinking the number of transistors it can fit in its chips. For context, the aforementioned Intel 8080 contained 6,000 transistors, a major breakthrough at the time. Today, PC microprocessors pack in 2.6 billion transistors, a testament to Intel's ability to continually innovate.