Breaking down the past, present, and future revenues streams of semiconductor giant Intel.

For decades, no other company has dominated the semiconductor industry as much as Intel ( INTC -0.51% ).

Qualcomm and NVIDIA are among the names challenging Intel, and both have grown much faster than their competitor over the past decade. However, if you look at the chip business from a multi-decade perspective, Intel's industrywide clout still shines through: 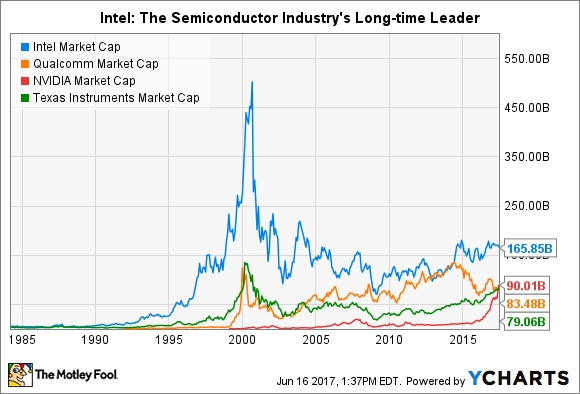 To get a sense of how Intel achieved this level of dominance and where it plans to go, let's take a more in-depth look at what powers Intel's sales and profits.

Though the company reports as many as seven divisions, Intel's two largest segments -- the client computing group (CCG) and data center group (DCG) -- contribute the overwhelming majority of Intel's financial performance. Here's a breakdown of Intel's segments by revenue over the past three years.

CCG and DCG accounted for 84% of Intel's total sales last year. CCG is effectively Intel's PC and mobile-device chip business. The central processing units (CPUs) the CCG segment makes are the electronic brains carrying out the complex computing tasks that power computers and mobile devices. DCG, in contrast, makes CPUs that are optimized for enterprise-grade hardware, such as data-center servers.

These two segments become even more important to Intel shareholders when examined in terms of their contributions to the company's operating profit.

CCG and DCG contribute essentially all of Intel's operating profit, after deducting the effect of losses in some of the company's smaller segments.

Intel dominates both the PC and server microprocessor markets. In fact, it's common to see estimates of Intel's PC chip-market share as high as 99%. Market-share estimates for Intel's data-center chips, though a bit harder to come by, generally exceed 90%.

Now let's look to the future of this semiconductor giant.

Laying the foundation for tomorrow

Though the company's current profit profile is attractive for a mature company, Intel's management is eying a grander vision. Over the next few years, Intel plans to reorient its operations to rely less on PCs and better align its revenue model with some of tech's largest trends.

Intel CEO Brian Krzanich recently detailed his company's plans at the Bank of America Tech Conference. During the presentation, Krzanich argued that its current position in the PC and data-center markets, combined with its opportunities in non-volatile memory, mobile, and the Internet of Things, provides the company with an estimated $250 billion total addressable market by 2021. 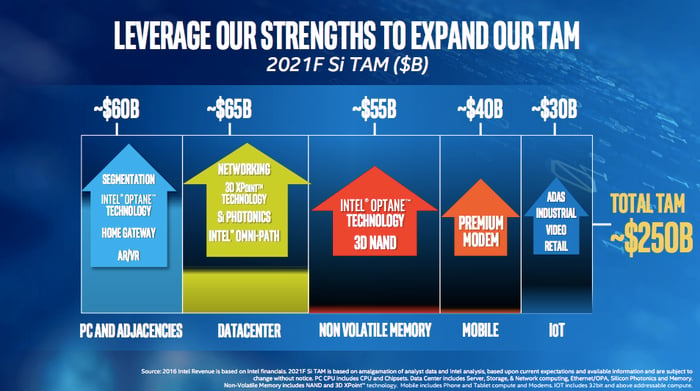 Of course, the company won't capture all of this opportunity. But the point remains that the company's total market opportunity is far larger than its current revenue footprint.

However, in the nearer term, Intel will remain more of an earnings growth story. In the same presentation, Krzanich said the company's management team sees Intel's top line growing in the low single digits over the next five years. However, thanks to growth investments contributing to greater profits, he also sees Intel's operating margin growing faster than sales and per-share profits rising faster than its operating margin.

Putting it all together, investors should expect high-single-digit to low-double-digit growth from Intel over the near to medium term, and those figures could increase slightly in the years to come. Intel is a mature company, so it isn't reasonable to expect much more than that. However, if you add in a decent dividend -- its shares currently yield 3.1% -- the return profile becomes fairly attractive for conservative investors.