Investors have been patiently awaiting the turnaround story at International Business Machines Corporation (NYSE:IBM), but its transition has been slow to materialize. Since Ginni Rometty took the reins as CEO in January 2012, the company has been divesting a number of its legacy businesses and investing heavily in new growth areas, such as artificial intelligence (AI)-based cognitive solutions and cloud computing. The company appears to be making progress. Over the past year these growth areas, which IBM calls its strategic imperatives, grew to $33.6 billion, which accounted for 42% of the company's revenue.

I'm not saying it won't eventually succeed, but thus far, the opportunity cost has been high. Over the past five years, the market, as represented by the S&P 500, has gained 83%, while IBM stock has languished, falling 20%. The company has seen year-over-year revenue declines for 20 consecutive quarters, and even famed investor Warren Buffet may be losing patience. If the purpose of investing is to make money, IBM's stock has been a dud.

All is not lost. For investors looking to capitalize on the growth areas of cloud computing and AI, Amazon.com, Inc. (NASDAQ:AMZN) and Alphabet Inc. (NASDAQ:GOOGL) (NASDAQ:GOOG) are already producing impressive results in those areas.

Why not invest in the leader in cloud computing? Image source: Getty Images.

Cloud at its biggest and best

If investors are looking to invest in cloud computing, why not go with Amazon.com, the leader in cloud services? In its most recent quarter, Amazon Web Services (AWS), the company's cloud computing segment, produced revenue of $3.66 billion, a 43% year-over-year increase. While AWS represents only 10% of the company's revenue, it grew to 89% of Amazon's operating income, up from 56% in the prior-year quarter.

Gartner's Magic Quadrant for Cloud Infrastructure-as-a-Service (IaaS) report cited Amazon as the leading cloud service provider. "It is the provider not only chosen by customers that value innovation and are implementing digital business projects but also preferred by customers that are migrating traditional data centers to cloud IaaS," the report stated.

Amazon has also built up an impressive presence in the field of AI, providing a variety of services to its cloud customers including speech recognition and natural language processing for chatbots, text-to-speech services, and image recognition.

Its AI resume also includes the popular Echo home smart speaker, powered by its virtual assistant, Alexa. The Echo comes in a variety of formats, including the unobtrusive Dot, the wardrobe-assisting Look, the portable Tap, and the video screen-enabled Show. Alexa underpins all of these devices and boasts over 10,000 skills or commands that allow users to engage in a number of ways, from streaming music to checking the weather.

Did I mention that Amazon also has a booming e-commerce business? 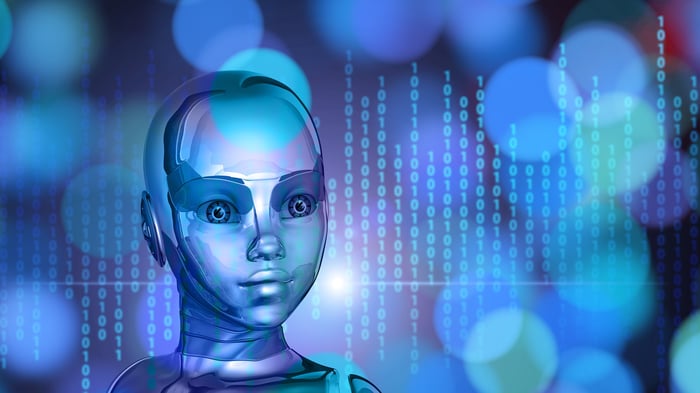 Huge advances have been made in AI over the past few years, and Alphabet subsidiary Google is undoubtedly one of the leaders. The company has made headlines as its self-driving-car moonshot project has evolved into Waymo, arguably the front-runner in the AI-based technology of autonomous driving. Google's AI-division Deep Mind has made a number of breakthroughs, including developing the first AI-system capable of beating a human competitor at the ancient game of Go, which some thought too complex for a computer system to master.

While many applications are novel, they haven't found practical business applications. Deep Mind applied its AI system to the challenge of reducing energy consumption for cooling Google's massive data centers. By creating algorithms that analyzed historical data, average energy consumption, and various operating scenarios, the system formulated a process for alternating the use of the cooling system to produce optimum efficiency. This reduced the amount of energy for cooling by 40% and brought down the total energy used by the data centers by 15%, saving the company millions.

The majority of AI applications require the raw number-crunching power of graphics processing units (GPUs) provided by NVIDIA Corporation (NASDAQ:NVDA) to train the systems. NVIDIA is the leader in providing GPUs for this purpose and has a virtual Who's-Who of big-name tech companies as customers, including Google.

In an effort to improve upon this success, Google developed a tensor processing unit (TPU), geared specifically for training AI systems. The microchip is an application-specific integrated circuit (ASIC) capable of "an order of magnitude better-optimized performance per watt for machine learning." Its latest generation of the TPU, unveiled in May, is capable of not only training an AI system but also running a system once it is trained. This puts NVIDIA's dominance in the market in question.

Google also has a fast-growing cloud segment, which Gartner acknowledges as one of the emerging forces in the field and a top player.

While IBM's has been growing its strategic initiatives, its results have been hampered by the decline of its legacy businesses. Google and Amazon are both in their prime, with their core businesses supporting their expansion into the growing areas of cloud computing and AI. While IBM may be a key player in these areas in the future, Amazon and Google already are.