According to a study commissioned by the Interstate Natural Gas Association of America, the U.S. and Canada will need to invest $546 billion in building new oil and gas midstream infrastructure through 2035. Of that amount, the industry will need to spend between $290 billion and $376 billion -- about 60% of the total at the midpoint -- on new natural gas-related infrastructure, including gas gathering and transmission lines, as well as processing, storage, and liquefied natural gas (LNG) export facilities. It's a long-term trend that plays right into the hands of Williams Companies (NYSE:WMB) and its master limited partnership, Williams Partners (NYSE: WPZ), because of the prime location of their natural gas infrastructure.

Fueling the need for additional natural gas infrastructure is the expectation that natural gas demand in North America will accelerate over the next few years. After growing at a 3.2% compound annual rate from 2010 through 2016, gas demand growth is projected to increase by a 3.8% compound annual rate through 2021, according to analysts at Wood Mackenzie. Several factors drive that forecast, including the recent or upcoming completion of new gas-fired power plants, petrochemical plants, and LNG export facilities. 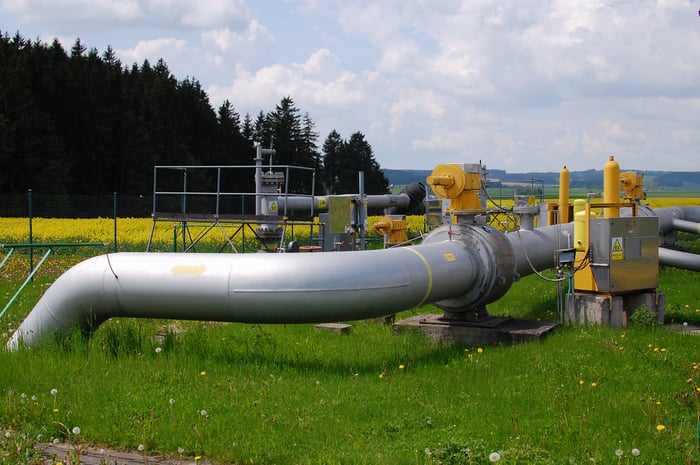 Because these new facilities run on natural gas, each requires a connection to the country's gas pipeline infrastructure, which drives expansion opportunities for pipeline companies. For example, Cheniere Energy (NYSEMKT:LNG) has two LNG export facilities under construction along the Gulf Coast that need access to a steady supply of natural gas. As a result, Cheniere Energy signed long-term supply contracts with Williams Partners, which led to the construction of the Gulf Trace and Gulf Connector projects. Meanwhile, there are 88 new natural gas-fired power plants under construction in the U.S., including 54 located near Williams' existing infrastructure. That proximity of these plants to its pipelines opened the door for Williams to build the Dalton Expansion, Hillabee phase 1 and 2, and Virginia Southside II, which will bring gas supplies to some of these facilities.

Overall, Williams Companies has already captured $7 billion of expansion opportunities just along its key Transco pipeline, which runs along the East Coast from New York City to Texas. The largest project is its $2.6 billion Atlantic Sunrise Project, which should enter service in the middle of next year and help move gas from the Marcellus shale to end users in the Mid-Atlantic, including Dominion's (NYSE:D) Cove Point LNG export terminal in Maryland. Williams estimates that upcoming Transco expansions will supply it with $900 million incremental EBITDA on an annual basis, which represents meaningful earnings growth for a company expected to generate between $4.25 billion to $4.45 billion in adjusted EBITDA this year.

In addition to the projects it has already secured, Williams is pursuing 21 additional expansion opportunities across its interstate pipeline systems along the East and Gulf Coast. These projects would support new power plants, rising industrial demand, and exports via both LNG facilities and pipelines to Mexico. In fact, the company is already in final negotiation on three of those projects.

Meanwhile, the company has several potential demand-related expansion opportunities across the rest of its portfolio. In the West, for example, rising gas demand should drive growth opportunities on its Northwest Pipeline. Meanwhile, two proposed LNG export facilities could eventually get built along the West Coast, which would receive gas supplies from Williams.

Finally, on the supply side, Williams controls a large-scale gathering and processing position in the rapidly growing Marcellus and Utica shale plays, which will account for 70% of natural gas production growth over the next few years. Because of the strategic location of its assets, Williams currently gathers 34% of the gas produced in the region. However, thanks to the acreage dedications from its customers, Williams will capture additional expansion opportunities to build new gathering lines and processing plants as it supports these producers when they increase their gas output to meet the growing pull of demand.

Natural gas demand in North America is expected to accelerate in the coming years, which could require as much as $376 billion of new gas-related infrastructure spending by 2035. That long-term trend bodes well for Williams Companies, which should capture an outsize portion of these future expansion opportunities because of the strategic location of its natural gas infrastructure. In fact, the company expects that its investments in new gas-related infrastructure will fuel 10% to 15% annual dividend growth over the next several years, making it an awesome buy for investors.