Bordered by a turbulent Pakistan and a resurgent China, India doesn't live in the quietest of neighborhoods. And like many folks who live in a rough neighborhood, India thinks it might rest a bit better at night if it were a bit better armed.

This is good news for two of America's biggest defense companies, Lockheed Martin (NYSE:LMT) and General Atomics, both of which stand to benefit from a recent spate of weapons buying by the Indian military. Let's quickly sketch out the developments for you, and then I'll explain what it means to investors. 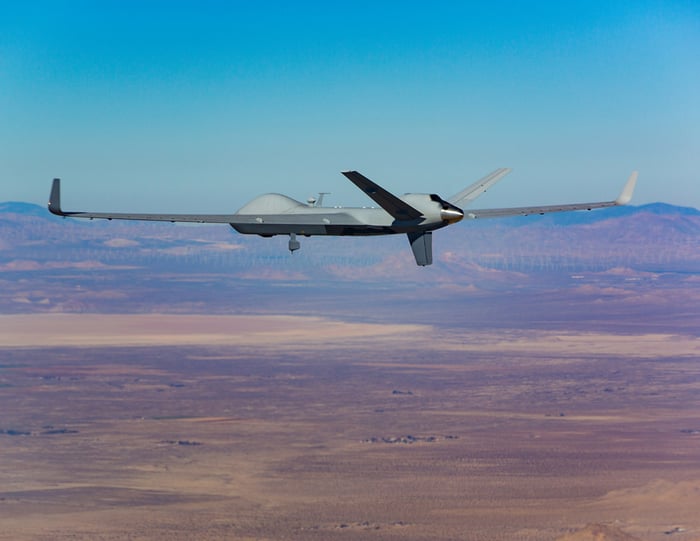 For decades, Fort Worth, Texas, has been the home of the F-16 Falcon fighter jet. While the F-16 remains the world's most popular jet fighter, Lockheed has been gradually moving to phase it out in favor of the new fifth-generation F-35 -- also built in Fort Worth.

Now, it's not 100% certain that this is how things will play out. India has been trying to upgrade its fighter jet fleet for years. This could mean a $12 billion payday for whoever gets to sell India its new fighters, but so far, the results has been suboptimal. A deal to buy 150 Rafale fighters from France's Dassault, for example, was cut short last year in a dispute over price. Currently, India is weighing switching out Dassault as its preferred provider, and hiring Lockheed or Sweden's Saab (offering its Gripen fighter) instead -- and there's still a chance that Saab will win the day.

If Lockheed does prevail, though, F-16 production, and the F-16 itself, could get a new lease on life.

Four days after news of the F-16 deal broke, Reuters reported that the Trump administration has agreed to sell India 22 SeaGuardian surveillance drones. Of course, the State Department must still sign off on the sale, and Congress must be "notified" by the Defense Security Cooperation Agency (DSCA) before the sale can proceed -- no such notification has been made yet. That said, once notification has been made, this sale, worth $2 billion to General Atomics, is all but guaranteed to be approved. There has never been an instance in which Congress has rejected a foreign arms sale after receiving notification of it from DSCA.

A variant of General Atomics' famous Predator drone, SeaGuardian is specially designed for naval missions, featuring "multimode maritime surface search radar" and an "automatic information system." The drone can fly for as long as 40 hours continuously at speeds up to 210 knots and altitudes in excess of 40,000 feet above sea level. Per drone, the Indian contract works out to a sales price of roughly $90.9 million each.

Although it's designed as a surveillance aircraft -- and that's the configuration in which India would be buying it -- it's worth noting that there have been cases in the past in which unarmed drones, sold to U.S. foreign allies, were later weaponized with the addition of precision munitions. In particular, in 2015, DSCA notified Congress of a pending sale of some $130 million worth of Hellfire missiles, laser guided bombs, and Joint Direct Attack Munitions (JDAMs) needed to weaponize its squadron of six General Atomics MQ-9 Reapers.

So while the instant sale of SeaGuardians to India is being characterized as "unarmed," it's entirely possible that these drones will eventually be armed, which will create an even bigger revenue stream for the companies doing the arming.