Chalk another one up for Elon Musk, seer of the future.

Commenting on the future of SpaceX's archrival United Launch Alliance (ULA) three years ago, the SpaceX CEO said he expected "the billion dollar plus fixed payment subsidy [paid to Boeing (NYSE:BA) and Lockheed Martin's (NYSE:LMT) joint venture] ULA to be phased out over time, as that is obviously contrary to fair and open competition." Three years later, this has finally come to pass. 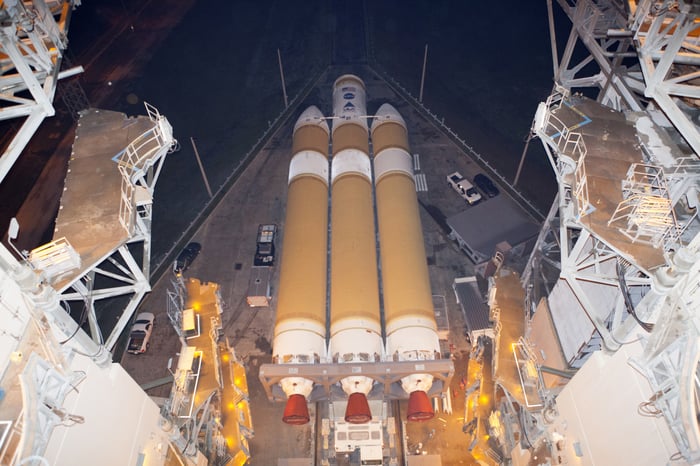 What subsidy is Musk talking about?

We first introduced you to ULA's ELC -- the annual Air Force payment to ULA for evolved expendable launch vehicle launch capability -- two years ago. Essentially a retainer agreement, ELC covers ULA's fixed costs for building and launching rockets. The ELC assures that ULA can afford to provide access to space as and when needed by the Air Force. But such assurance doesn't come cheap.

For example, the most recent ELC, announced Sept. 30, 2016, saw the Air Force award ULA $860.8 million to provide "Evolved Expendable Launch Vehicle launch capability for the Delta IV and Atlas V families of launch vehicles." Then, on May 19 of this year, the Air Force forked over another $208.1 million to pay ULA to launch a single Atlas V 551 rocket "under the requirements contract terms of the Evolved Expendable Launch Vehicle (EELV) Phase I contract."

This bifurcation of launch costs has become routine. (In 2015, for example, ULA received $882.1 million as an EELV retainer. In 2014, the award was worth $938.4 million.) So ULA probably thought it could count on receiving this money year after year, every year. Problem is, the ELC was originally authorized in an era when there was only one provider available to launch U.S. government satellites into space, and the government needed to ensure that that provider would not go insolvent.

Today, the Air Force has other options, such as SpaceX, for launching large satellites, and it could soon have the option of using NewSpace operators including Vector and Rocket Lab for launching smaller satellites. As more and more alternatives to ULA come on line, there seems to be less and less need for the Air Force to keep ULA "on retainer."

And so the Air Force is cancelling the retainer.

Earlier this year, the Department of Defense published its "Fiscal Year (FY) 2018 Budget Estimates" for "Space Procurement, Air Force." In this report, the Air Force laid out its expected spending on space projects over the next five years. The report runs to 168 pages in total, but what really sticks out is this line:

To comply with Fiscal Year 2016 National Defense Authorization Act, Air Force plans to end the current EELV Launch Capability at the end of Fiscal [Y]ear 2019. Beginning in Fiscal Year 2020, the EELV budget request will be in a single P-1 line. Fiscal Year 2017 is the final ordering period for the Phase 1 block buy contract.

Translation: The Air Force will award ULA one final ELC contract this year -- probably in September, as has been its past practice. But this will be the last such $1 billion subsidy ULA receives. Going forward, instead of dividing its spending between one contract for EELV and a second contract for launching rockets "under the requirements contract terms" of EELV, the Air Force will pay just one consolidated price per space launch -- one single "P-1 line" item.

For taxpayers, this is good news. It means more transparency in government spending, and will better enable Congress to judge the cost-effectiveness of launching rockets via ULA, versus launching via SpaceX (or someone else). It will make for easier apples-to-apples comparisons. For investors, too, this increased transparency will help us to better gauge how much money Boeing and Lockheed Martin can expect to receive from their ULA joint venture.

But what does it mean for Boeing and Lockheed themselves?

Two years ago, ULA CEO Tory Bruno told Reuters that he's "not the least bit afraid of competition." Since then, ULA has matched actions to words, doubling down on its collaboration with Blue Origin to develop a cheaper rocket engine for example, cutting prices on its government launches, and even building a new website, Rocketbuilder.com, to permit buyers to order rocket launches a la carte.

All these efforts are in furtherance of Bruno's aim of getting ULA launch prices down below $100 million per launch, and thus competitive with SpaceX's prices. To his credit, Bruno seems to be making progress toward that goal. Still, the loss of ULA's $1 billion-ish annual retainer is going to hurt, and while lowering prices will make ULA more competitive with SpaceX, it's also likely to hurt revenue, and profits, at ULA parent companies Boeing and Lockheed.

We won't see the effect of ELC's phase-out on this year's profits. But beginning next year, investors should be on the lookout for it.