Even after a steep decline, Under Armour stock is expensive. Shares of these two competitors are better deals.

Not too long ago, Under Armour (UA 3.08%) was a Wall Street darling. Revenue grew by more than 20% in 2015 and 2016, and earnings have exploded over the past decade as the company's brand has gained traction. This success pushed the stock up to dizzying heights, with the price-to-earnings ratio topping 100 at its peak in late 2015.

Under Armour's revenue growth has since slowed, and earnings growth has ground to a halt. Revenue grew by just 7% year over year during the first quarter of 2017, and the company posted a small net loss. Under Armour expects to grow revenue by 11% to 12% this year, and operating income is expected to slump by more than 20%.

It didn't take an investing genius to see that a triple-digit multiple of earnings was bonkers. Under Armour stock has dropped 50% over the past year, but it still trades for around 46 times the average analyst estimate for earnings. The company still has plenty of long-term growth potential, but that's more than reflected in the stock price. 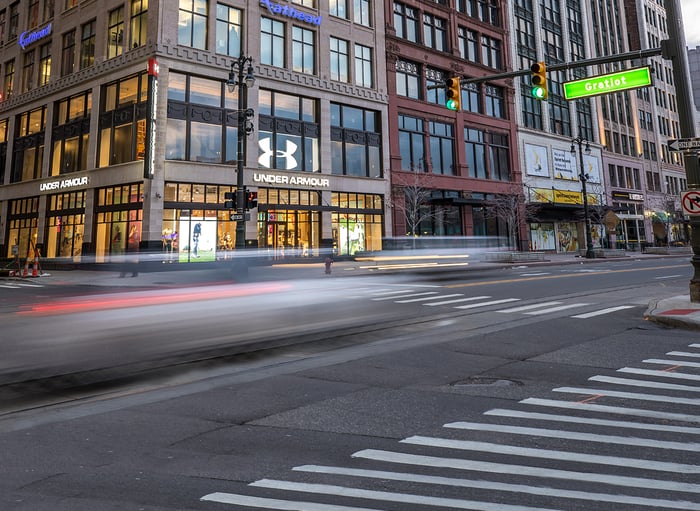 You could invest in Under Armour and hope that the company eventually grows into its valuation. Or you could buy shares of Nike (NKE 0.11%) or Skechers (SKX 0.38%), two footwear stocks that look like far better values.

Under Armour is attempting to become the next Nike. Its current struggles show that's easier said than done. Nike produced nearly seven times as much revenue as Under Armour last year, and the company's margins have been as steady as can be over the past decade. Under Armour's push into footwear hasn't done much to dent Nike's core business. In fiscal 2017, which ended in May, Nike grew its footwear revenue by 6% globally.

Given Nike's position of dominance, it shouldn't be surprising that the stock doesn't look all that cheap. Nike produced per-share earnings of $2.51 in fiscal 2017, putting the P/E ratio at about 23. But the S&P 500 currently sports a PE ratio in the mid-20s, so Nike's valuation doesn't look unreasonable on a relative basis. And compared to Under Armour, Nike looks like a veritable bargain.

Nike is facing some challenges of its own that investors need to consider. The company recently confirmed that it will test selling directly on Amazon.com, in part to stamp out unlicensed third-party vendors. But another reason the company is turning to Amazon is to make sure it's selling its products where customers are shopping. With the retail industry going through an upheaval, any company that relies on physical stores to sell its products needs to change with the times.

While Under Armour stock is an expensive bet that Nike will be disrupted, Nike stock is bet that disruption won't be so easy. Given Under Armour's ongoing struggles, I'd take the latter bet over the former any day.

Nike and Under Armour aren't the only two companies vying for footwear supremacy. Skechers is a major player as well, generating nearly $3.6 billion of revenue in 2016. The first quarter of 2017 marked the first time Skechers produced more than $1 billion in quarterly revenue.

Skechers produced earnings of $1.57 per share last year, putting the P/E ratio at about 18. This, however, ignores excess cash on the balance sheet. Backing out the roughly $530 million of net cash, Skechers' P/E ratio falls to a little less than 16.

Skechers stock isn't as cheap as it was late last year, when the stock briefly fell below $20, compared to around $28 today. But for a company enjoying double-digit international growth and solid comparable-sales growth in its retail business, the current price looks reasonable -- certainly more reasonable than the still-inflated price of Under Armour stock.