Stock-market crashes can take a toll on just about any stock portfolio, but investors might come out of a market crash a bit better off if they add Wal-Mart Stores (NYSE:WMT), Johnson & Johnson (NYSE:JNJ), and Bristol-Myers Squibb (NYSE:BMY) to their holdings. According to our Motley Fool investors, demand at these companies will hold up in a downturn, giving them a chance to deliver market-beating returns.

Count on low-priced retail to weather the storm

Dan Caplinger (Wal-Mart): Market crashes are scary because they often take stocks down even if there's no good fundamental reason for doing so. Yet there are a few stocks that investors look to for stability even under the toughest of conditions. During the most recent market crash in 2008, Wal-Mart was one of the only winners to come out of the financial crisis and Great Recession, and investors couldn't have asked for better performance. 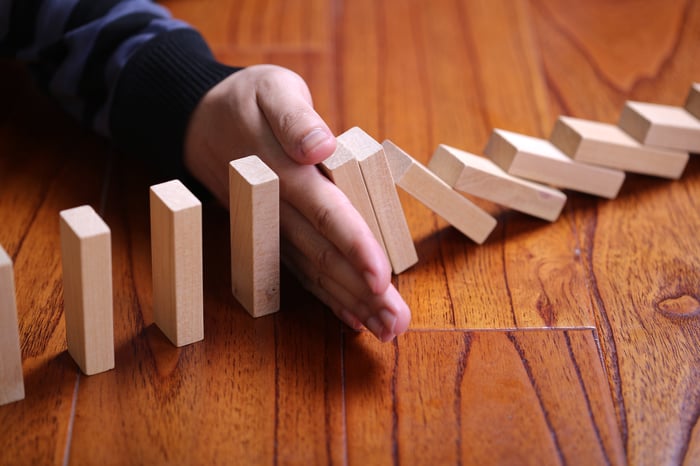 The key to Wal-Mart's ability to weather crashes has everything to do with the cause of the plunge in 2008. When the economy is strong, consumers feel good about their economic circumstances, and they feel more comfortable spending money. That's generally good for most retailers, but the big-box giant's emphasis on low prices and discount goods holds less appeal for confident consumers than shopping at higher-end luxury stores.

What the 2008 recession and market crash did was to show American shoppers that they needed Wal-Mart and its price focus. In the end, the retail giant fared much better than most of its competitors, largely because many customers moved down from higher-end stores in search of more affordable options. The stock finished 2008 with a 20% gain, beating the S&P 500's return by more than 55 percentage points.

There's no guarantee that the next market crash will come with a recession, so Wal-Mart might not benefit from the same positive impact. The competitive landscape has also shifted, and Wal-Mart's benefit from expanding its grocery business could come with new risks in the near future. Yet with a history of solid performance even in tough markets, Wal-Mart has convinced many investors that it can thrive even in the next market crash.

Take good care of your portfolio

Demitri Kalogeropoulos (Johnson & Johnson): Healthcare titan Johnson & Johnson has lived through more than a few market slumps in its over 120 years of doing business, yet these ups and downs don't get between income investors and their quarterly checks. In fact, with 55 consecutive annual payout raises, Johnson & Johnson boasts one of the longest-running dividends on the market today: 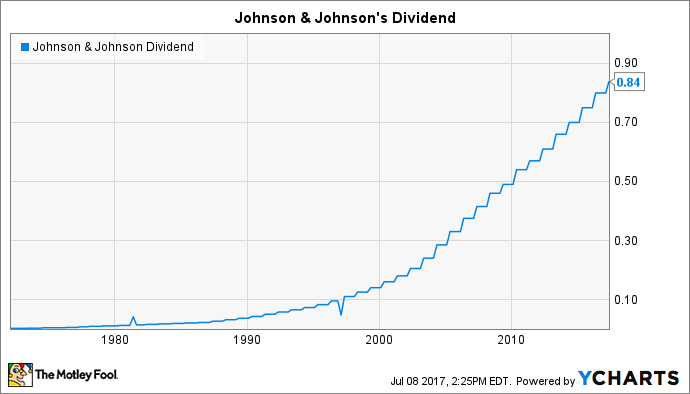 Shareholders can't bank on a perfect record of sales and earnings growth; after all, revenue has declined in two of the last ten fiscal years. Investors occasionally endure painful profit environments, too. The most recent was a two-year stretch that was marked by severe economic decline around the world, the patent expiration for two blockbuster drugs, and a costly product recall. "Our company was severely tested," Johnson & Johnson's CEO said in its 2011 annual report.

Yet the operation excelled through this period, thanks, in part, to a well-diversified portfolio of market-leading products. In fact, it gets 70% of its sales from products that are ranked either No. 1 or No. 2 in their respective markets. Johnson & Johnson's aggressive focus on the future is another competitive strength that's nearly impossible for rivals to match. It plowed $7.5 billion into research and development spending in 2011; that number rose to $9.1 billion last year, equivalent to 13% of sales.

The aggressive pace of innovation ensures that around one-quarter of the company's revenue comes from products released in just the past five years. In that way, the owner of iconic healthcare brands like Band-Aid demonstrates that constant adaptation is the surest path to market-beating business results over the long term.

Bristol-Myers Squibb is one of the largest drugmakers in the world, and thanks to Opdivo and Yervoy, it's one of the fastest-growing developers of drugs used to treat cancer. A larger, longer-living population means its medicines are increasingly being used. And because Opdivo and Yervoy treat advanced cancers, where there are fewer treatment options, demand for them is pretty insulated against recession.

Last year, Bristol-Myers Squibb's shares fell after the failure of a first-line advanced lung cancer study evaluating Opdivo. But I think other studies can still allow it to compete in the first-line setting someday, and that dozens of Opdivo studies in other indications should fuel future growth. Opdivo's sales were $1.1 billion in the first quarter, up 60% from one year ago, and while Yervoy's sales didn't grow as quickly, they still increased by a healthy 25% year over year to $330 million.

Also, the company is benefiting from growing use of Eliquis, an anticoagulant that's displacing warfarin in many indications. It shares Eliquis with Pfizer, but with $1.1 billion in Q1 sales, there's plenty of money to go around, especially since its sales grew 50% in the past year.

Bristol-Myers Squibb's share-price drop last year means its dividend yield has increased to 2.8%, and with a forward price-to-earnings ratio below 18, you aren't paying through the nose to own this company. Given that Bristol-Myers Squibb's shares declined just 13% in 2008 while the S&P 500 lost more than one-third of its value, I think a good argument can be made for owning this stock the next time a bear market comes knocking.