Amazon may be at the top of the heap when it comes to disrupting traditional shopping and moving everything online. There is one company that seems to be bucking the trend, and that is McCormick.

Amazon.com Inc.'s (AMZN -0.07%) recent bid to acquire Whole Foods Market Inc. (WFM) is causing major reverberations in the retail space. Investors are questioning whether traditional retailers and their suppliers are about to feel the pinch from Amazon's style of pressuring margins down to the nub in order to take market share from competitors.

Companies like Target Corporation and Wal-Mart Stores Inc. initially saw their stocks sell off in anticipation of Amazon's launch into the grocery business. Speculation abounds as to how the 460 Whole Foods physical stores may play a role in Amazon's distribution strategy.

McCormick Inc. (MKC -0.98%), on the other hand, does not seem nearly as susceptible to the Amazonian invasion that is coming to the grocery space as many of its brethren. It occupies a dominant position in a niche industry that may help it keep its standing despite possible disruption coming to the space. 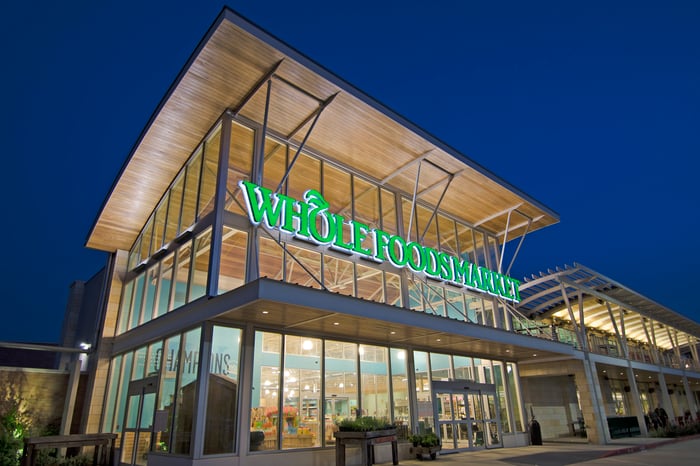 When Whole Foods first started in business, it focused on a niche known as organic foods. The company built the space from scratch and made lots of money in the process. Those profits attracted competition from other grocers who said, if Whole Foods can do organic, why can't we?

The bottom line is, there were enough customers who wanted organic products and enough money being spent by those consumers to fuel an organic grocery frenzy. To some extent, that has resulted in the space being commoditized by competition, Whole Foods' market share being reduced, and possibly Amazon being given an attractive opportunity to buy Whole Foods.

McCormick is a bit different. It too started in a niche industry: herbs and spices. Like Whole Foods, it became the No. 1 game in town for the market it addressed. Unlike the organic space, the herbs and spices business has remained relatively small. Today, McCormick has about 20% market share of the $11 billion herb and spice market, its largest product category.

Below is a table showing the relative size of McCormick in comparison to Whole Foods and the much larger Amazon.

McCormick's business is hard to replicate

McCormick has developed a worldwide supply chain, sourcing ingredients from 40 different countries to make its products. The supplier relationships it has developed span decades. The reason McCormick could create the process and infrastructure for its supply chain is because it moved slowly, product by product, in the very small niche area of herbs and spices. It would require a massive effort on the part of a competitor to recreate what McCormick has done.

Whole Foods also has an excellent supply chain, and it is focused on local growers. With the vast majority of Whole Foods stores being in the United States, it is only natural that the company has a U.S. focus as opposed to McCormick, which has suppliers worldwide and facilities in 24 different countries.

The business McCormick dominates is simply too small for Amazon to go after. There is not a big enough pot of gold at the end of the herbs and spices rainbow to move the needle for a company the size of Amazon. It would be a complete distraction for it to begin wandering the globe to find the finest chili peppers or oregano. Instead, it has much bigger opportunities to go after.

That is all fine with me. McCormick looks to be a safe investment in a brand that dominates an industry that appears to be too small to attract the big gorilla that is entering the grocery business but is still big enough to provide years of growth for McCormick.