Ford Motor Company (NYSE:F) said its sales in Europe fell about 1% in June, as a big jump in SUV demand wasn't enough to fully offset declines in sales of small and midsize cars.

Ford sold about 128,400 vehicles last month in the 20 Western and Central European markets (the "Euro 20") that it considers its core market in Europe. That was down 1.4%, or about 1,800 vehicles from a year ago. That decline dropped Ford's market share in the region by 0.2 percentage point from a year ago, to 7.5% for the month.

In Europe as a whole, including Russia, Turkey, the former Soviet republics, and the countries of Eastern Europe (what Ford calls the "Euro 50"), Ford sold about 142,500 vehicles in June, down 1.6% from a year ago. Ford's market share in the Euro 50 was flat from a year ago, at 7.7%. It turns out that Europeans like Ford's SUVs, too

We think of Europe as the land of small cars, thanks to high gas taxes and narrow streets. That's not wrong: Ford's best-sellers in the Euro 20 are the little Fiesta and the compact Focus. That has been true for years, and nothing else is yet close.

However, like their counterparts in the U.S. and China, European new-car buyers are increasingly favoring car-based "crossover" SUVs over traditional sedan and hatchback models. Sales of Ford's SUVs as a group were up over 20% in June from a year ago -- and they're up almost 30% year to date.

The Kuga is getting some help from its smaller and larger siblings. Sales of the small Ecosport rose 9% to about 6,000 last month, and they were up almost 17% in the first half of 2017. The larger Edge added about 1,400 sales last month, roughly flat from a year ago. 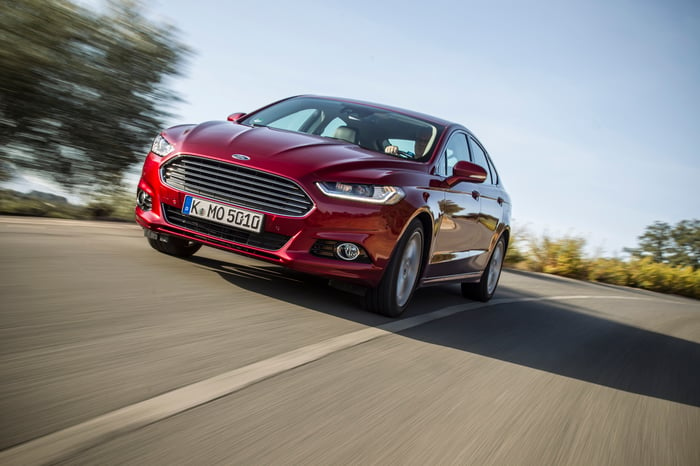 The Ford Mondeo is closely related to the U.S.-market Fusion. As with its American sibling, Mondeo sales have fallen sharply in 2017. Image source: Ford Motor Company.

The flip side: Ford's car sales are suffering

Here in the U.S., we've seen Ford's car models like the Fusion and Focus take big sales dives over the last year. That has worked out OK from a profit perspective, because SUVs are generally more profitable than sedans, but it has forced Ford to rethink its investments in future products.

The scenario is playing out a little differently in Europe, but it's not too different: Sales of the Fiesta, Focus, and Mondeo (the Fusion's European twin) are all down year-to-date from a year ago -- but the midsize Mondeo has taken a much bigger hit than its smaller siblings.

Fiesta sales in the Euro 20 were down 22% in June, but Ford is in the midst of changing over to an all-new Fiesta in Europe, and dealer supplies are likely thin. Year to date, Fiesta sales are down just 1.4% and Focus sales are off only 0.8%, but sales of the Mondeo are down over 24% -- and were down nearly 40% in June.

For Ford investors: What to expect in second-quarter results

What will this mean for Ford's profit in Europe when it reports second-quarter results later this month?

Ford's overall sales in the Euro 20 were down about 2.2% in the second quarter. But as we've seen, Ford has likely shifted to a somewhat richer "mix" of models sold from a year ago, as strong sales of SUVs (particularly the Kuga) have largely offset declines in sales of car models (particularly the Mondeo).

Brexit-related currency swings and higher costs could push Ford's second-quarter result in Europe down from the $467 million it earned in the second quarter of 2016. But the small drop in sales probably won't be a big factor: It was likely more than offset by the year-over-year improvement in product mix.