The latest market share numbers for the central processing unit (CPU) space put together by PassMark gave Intel (NASDAQ:INTC) investors a rude awakening. The chip giant is losing its vice-like grip over the CPU market because of stiff competition from Advanced Micro Devices (NASDAQ:AMD), whose latest CPU lineup seems to have captured consumers' attention.

PassMark's PerformanceTest, which is used to test PC speeds and compare the performance of different PCs, puts AMD's share of the x86 microprocessor market at 23.4% at the beginning of the third quarter of 2017, while Intel has the rest. By comparison, AMD's market share stood at just 17.5% in the prior-year period, so it has gained a significant portion of this market from Intel's clutches. 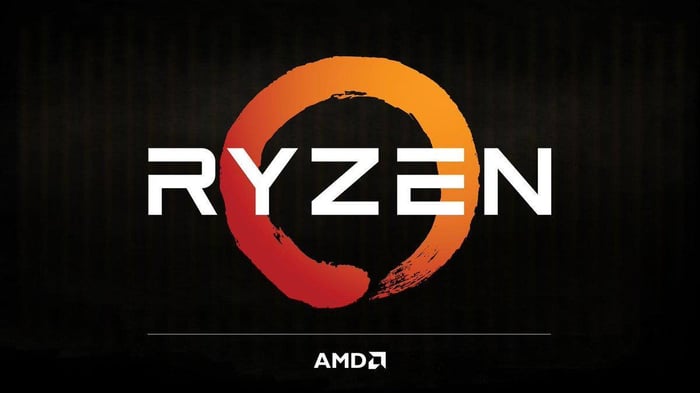 There are limitations to the benchmarking utility, as it can count results only from those users who use its benchmarking tool. Additionally, the benchmarking software can run only on the Windows platform, so it doesn't present the complete picture of the CPU market.

Still, it is now evident that AMD's new Ryzen CPUs are gaining in popularity as more users are testing PCs made on this platform on PassMark. The good news for AMD's investors is that it isn't done yet -- more Ryzen CPUs are going to hit the market in the coming months.

AMD has charted out a smart marketing blitz to corner a bigger share of the CPU market. The company launched its Ryzen 7 and Ryzen 5 processors for the consumer market in the first six months of 2017. The market share gains indicate that these two processors have helped AMD gain traction in high-end PCs, and it is now working its way toward the mid-tier segment with the Ryzen 3 chips that were teased earlier in July.

The high-end Ryzen 7 and Ryzen 5 processors have given consumers a value-for-money proposition when compared to Intel's chips. If AMD can price the Ryzen 3 processors smartly, it can make a dent in the mid-range PC hardware market that accounts for an estimated 35% of sales.

Additionally, AMD has started targeting the commercial CPU market with the surprise launch of the Ryzen PRO line of CPUs. AMD seems to have strung together an impressive CPU lineup in terms of specifications when compared to Intel, which could give the former a substantial boost if it can price them right.

Furthermore, AMD isn't going to miss out on the laptop and notebook market either as it is set to launch its Ryzen Mobile and mobile Ryzen PRO chips later this year and in the first half of 2018, respectively. The roll-out of the mobile chips is estimated to boost the company's serviceable addressable market by another $10 billion, and also increase its chances of improving its CPU market share with a comprehensive product lineup.

Can Intel fight back?

Intel has been trying a number of moves to fight back against AMD in the premium desktop market. First, it decided to slash prices of its CPUs, though this ploy hasn't worked for it as the market share losses indicate. Now Intel has decided to try to upstage AMD by launching chips with superior specifications for high-end PCs.

For instance, its Core i9 Extreme CPU packs in more threads and cores compared to AMD's flagship offering, the Threadripper. Intel seems to be trying to seize the marketing initiative back from AMD as it tries to push the sales of the recently launched Skylake-X processors.

Not surprisingly, Intel is targeting the high-end desktop market with Skylake-X in a bid to regain the momentum in this high-margin space where average selling prices are on the higher side.

Only time will tell if Intel is packing enough into its new chips to break AMD's impressive run in the CPU space, though it will need to match the latter in terms of pricing as well. But given the way AMD has captured consumers' attention by launching one Ryzen chip after the other and boasting their superior capabilities at the same time, Intel will have its task cut out for it.