Please ensure Javascript is enabled for purposes of website accessibility
Log In Help Join The Motley Fool
Free Article Join Over 1 Million Premium Members And Get More In-Depth Stock Guidance and Research
By Rich Smith - Jul 15, 2017 at 8:13AM

Raytheon investors have $485 million worth of reasons to like this deal.

From the Romanian border to the Russian naval base at Sevastopol in occupied Crimea is a distance of less than 200 miles by boat (or warplane). A Su-27 fighter jet stationed in Moldova's breakaway Russian-backed province of Transnistria could reach the Romanian border -- just 75 miles -- in less than three minutes.

Those two facts tell you why NATO member Romania wants to beef up its air defenses, and why the U.S. government is going to oblige it with that request. 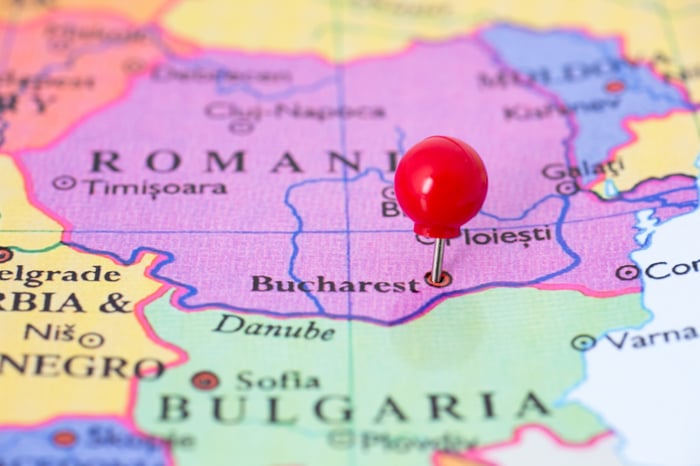 Last week, in a busy day for Congress, the U.S. Defense Security Cooperation Agency notified legislators of multiple arms sale contracts in the works. As DSCA advised, the U.S. State Department has approved plans to sell 120mm tank rounds to Australia, ship Hellfire missiles to the Netherlands, and yes -- sell Romania a whopping $3.9 billion worth of Patriot air defense systems and missiles for them to shoot.

So 28 launchers, and eight missiles per launcher in total.

DSCA was coy in describing its reasons for wanting to make the sale, confiding that the Patriot missiles will "improve the security of a NATO ally," "deter regional threats" and "guard against aggression." Security against (and threats and aggression from) whom was left unsaid. But just to the right of the map up above looms the shadow of Russia, which has invaded two states friendly to NATO in the past decade, and may be hungry for more.

Russia's recent history of aggression in the region explains why Romania wants to buy its Patriots. But what does this sale mean to investors?

At an average cost of about $3 million apiece, the actual missiles in this missile sale are the smallest part of the deal, comprising only about $672 million of the total sales price. The bulk of this sale, when it becomes final (and it will -- Congress has never rejected an arms deal notified to it by DSCA, ever), will be made up of the sale of the launching systems, control stations, and radar -- which are built by Raytheon.

Thus, while DSCA named both Raytheon and Lockheed Martin as "prime contractors" on the Patriot deal, it's likely that Raytheon will reap the bulk of the revenue -- as much as $3.4 billion out of the $3.9 billion sale. At the robust 14.3% operating profit margin that S&P Global Market Intelligence shows Raytheon earning on these kinds of deals, that means about $485 million more profit in Raytheon's pocket.

Which is a good day's work for Raytheon, indeed.