Qualcomm is trying to make its way into new markets, but the path isn't going to be easy.

Shares of Qualcomm (QCOM -0.86%) have dropped close to their 52-week lows this year as the company has been cornered by a number of problems. The chip giant entered 2017 on the back foot thanks to the rise of MediaTek and other rivals in the smartphone processor market, and things got more complicated after Apple decided to throw a spanner into Qualcomm's royalty revenue stream.

However, Qualcomm is trying to keep investors' spirits high by investing in new opportunities such as virtual reality and automotive. But the chipmaker isn't going to enjoy a free pass in these areas, as it will run into potent competition from different elements. 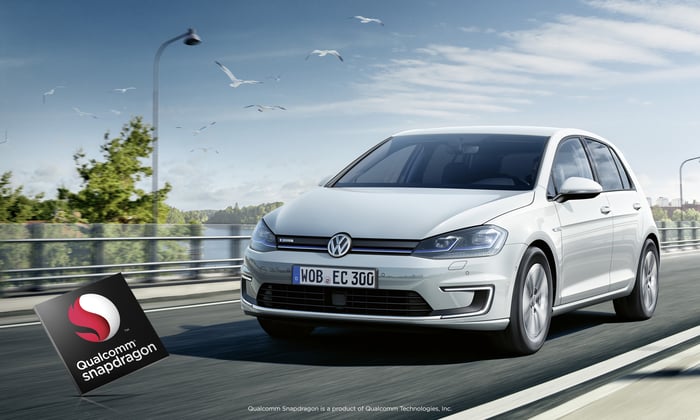 Qualcomm decided to make a big splash in the automotive space by announcing the acquisition of NXP Semiconductors for $38 billion. But the merger has run into a roadblock as the European Commission has decided to pause the antitrust review of the deal for want of more information. As it turns out, the Commission has preliminary concerns regarding three points, including Qualcomm's legacy of charging big royalty fees.

The European Commission is concerned that the chipmaker could charge huge loyalty fees on NXP's technology patents, so Qualcomm will have to convince them otherwise or suggest measures that will help the merger get through. But this could potentially curb Qualcomm's royalty revenue if the company proposes a lower royalty structure to allay the Commission's fears.

On the other hand, Qualcomm's NXP acquisition doesn't guarantee automotive riches as chipmaker Infineon Technologies is gaining ground in this space. Strategy Analytics puts Infineon's market share in the automotive semiconductor space at 10.7% at the end of April 2017, compared to NXP's 14%. By comparison, NXP was enjoying a greater share of 14.5% in 2016.

Infineon has made smart moves to capture more of the automotive semiconductor market by tapping electric vehicle (EV) makers to push sales. In fact, eight of the world's top 10 EV sellers were its clients last year, including Tesla's Model S and Model X. Now Infineon's dominance in EVs should reap rich rewards in the long run as EVs carry higher semiconductor content.

It could gain more market share in this space as EV shipments grow from just 0.6 million units last year to an average of 6 million units in 2025. This could curb Qualcomm's potential automotive growth even after the successful acquisition of NXP.

Virtual reality won't be a cakewalk

Qualcomm wants to be the enabler of virtual reality technology with its head-mounted display (HMD) platform, which was announced earlier this year. The chipmaker's Snapdragon 835 VR development kit is supposed to help OEMs (original equipment manufacturers) reduce the development time of VR headsets and also control costs.

Additionally, Qualcomm is trying to offer users a more immersive experience as its headset don't need to be connected to PCs and allow the use of hands to explore the virtual world. The chipmaker is trying to increase its chip shipments by jumping on to the VR headset bandwagon, which is a smart move as VR headset shipments could grow six-fold in the next three years according to IDC estimates. But Qualcomm won't have a free run in such a lucrative market since Intel is already making a move in this space.

Intel unveiled its Project Alloy all-in-one VR headset solution in August last year, and it is trying to deliver the same benefits as Qualcomm's platform. For instance, Intel's platform embeds different sensors, cameras, and controls into the headset, while cutting the cord to help users explore virtual reality without any constraints.

Just like Qualcomm, Intel is going to open source Project Alloy so that headset manufacturers and developers can use its reference design to manufacture HMDs, which puts it in direct competition with Qualcomm. What's more, Intel is also collaborating with Microsoft to create  Windows-optimized content, which could tilt the balance in Alloy's favor.

In all, Qualcomm's difficulties are far from over, and the high-growth opportunities that it is pursuing don't guarantee success in light of the competition that it is facing. Investors, therefore, need to keep a close watch on Qualcomm's progress in these two areas as they are going to play a crucial role in helping it overcome the stiff competition in the smartphone chip market.