Give President Trump his due.

And so Trump tweeted that, if Lockheed Martin didn't move quickly to cut the cost of the F-35, he would "price-out a comparable F-18 Super Hornet" from Boeing (NYSE:BA) and buy that instead. (At the time, Boeing F/A-18 Super Hornets were selling for closer to $70 million, and a new Advanced Super Hornet was in the works that would eventually be priced at about $79 million.)

F-35 prices have been plummeting ever since. 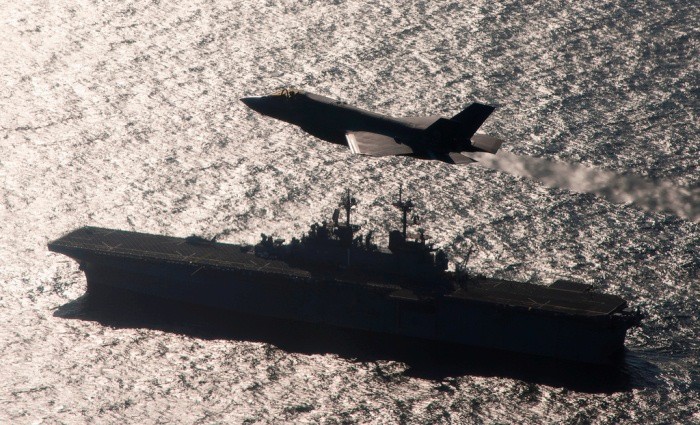 Case in point: Last week, the U.S. Department of Defense announced in its daily digest of defense deals that it has awarded Lockheed Martin a $5.58 billion contract to supply the U.S. Air Force, Navy, and Marine Corps with a grand total of 74 new F-35 fighter jets. Specifically, Lockheed Martin will be delivering:

Now, $5.58 billion probably sounds like a lot of money (because it is). But here's the crucial fact to keep in mind: At the time President Trump made his infamous F-35 tweet, Lockheed Martin was selling F-35A CTOL fighters for about $100 million apiece. (F-35B short takeoff-and-vertical landing (STOVL) fighters, and F-35C carrier variants cost much, much more).

Responding to President Trump's criticism, however, and helped by economies of scale as it ramped up production, Lockheed had already worked down the price of an F-35A to just $94.6 million by early this year. Granted, F-35Cs were still costing nearly $122 million a pop, and F-35Bs nearly $123 million -- but even so, the price for all F-35 variants was coming down rapidly, and moving in the right direction.

By June, we heard that the price had fallen even farther, with Lockheed rumored to have inked an 3-year, 11-nation, $40 billion deal to sell as many as 440 F-35 fighter jets (mainly F-35As) to the Pentagon and American allies for prices as low as $80 million. This latest Defense Department purchase shows that F-35s have become even cheaper than that -- and ahead of schedule.

Even more amazing, more than one third of the F-35s the Pentagon will be buying are of the -B and -C variants -- which at last report each cost roughly 30% more than an F-35A. This suggests either that F-35Bs and -Cs are now approaching the lower cost of cheaper F-35As -- or that the F-35A itself may now cost even less than $75.4 million.

Assuming the $5.58 billion price holds firm (F-35 Joint Program Office spokesman Joe DellaVedova says that the final price for Low Rate Initial Production Lot 11, containing the 74 planes in question, is still being negotiated), this new and improved F-35 price appears to weaken Boeing's argument for the Pentagon buying F/A-18 fighter jets as a cheaper alternative to Lockheed's F-35. So what does this mean for investors in Boeing and Lockheed?

Well, it's probably not great news for Boeing, but it doesn't mean all hope is lost. Boeing just succeeded in securing a commitment from Navy to fund development of its Advanced Super Hornet, after all. And even if Lockheed's F-35A variant is now price competitive with Boeing's F/A-18, F-35As still can't land on aircraft carriers. Meanwhile, F-35Cs -- which can land on carriers -- probably still cost more than F/A-18s.

That said, the lower F-35 prices fall, the smaller Boeing's price advantage shrinks. If this trend of falling F-35 prices keeps moving the way it's been going, Lockheed could win this contest yet -- and push Boeing out of the fighter jet business for good.