Long known for its enormous HIV franchise and market share, Gilead branched out into hepatitis C (HCV) in 2012. While that market provided plenty of growth in 2014, payer restrictions and the fact that Gilead had cured most of the sickest patients left management searching for new ways to create shareholder value by 2016.

Gilead has a lot of money to do just that: $34.6 billion in cash and short- and long-term investments. Here are a few ways it could use that cash hoard. 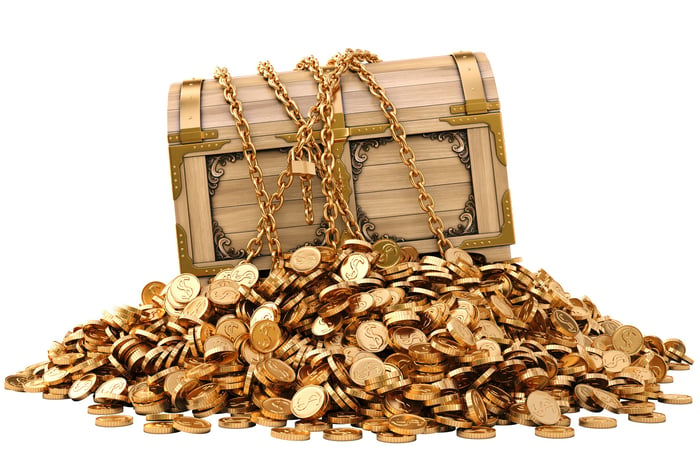 Or it could just pull a Scrooge McDuck and swim in a vault of gold coins. Image source: Getty Images.

Gilead has an impressive acquisition history. In 2003, it bought Triangle Pharmaceuticals for $464 million to get access to HIV drug emtricitabine, which is still present in most of Gilead's HIV drugs. Those cocktails generated around $3 billion in sales just last quarter. And in 2012, Gilead spent $11 billion to acquire Pharmasset and its HCV drug sofosbuvir, which is the cornerstone drug for its entire HCV portfolio, bringing in a whopping $14.8 billion in sales last year.

Gilead's history of successful mergers and acquisitions, combined with its revenue declines, has had Wall Street champing at the bit for an acquisition -- any acquisition -- to juice up its top line. Yet management has remained disciplined, steadfastly refusing to buy a company that doesn't represent a good strategic fit. Gilead COO Kevin Young summarized things at a recent healthcare conference: "We have indicated that we have interest in oncology, hematology, but we're not exclusively looking just in that disease setting. So we want something that is sustainable, that has a very long runway, and is really not just about a short-term fix." (These and other quotes come from S&P Market Intelligence.)

Gilead could also sign partnerships with a number of other companies, paying up front to license their clinical-stage drugs in exchange for reaping the lion's share of the profits after commercialization. One of the key benefits to doing partnerships instead of acquisitions is the ability to spread one's bets across a greater number of companies and platforms, enabling greater diversification. On the flip side, the drug developer usually gets a portion of profits, which reduces margin on the winners.

Gilead also has a storied history of partnerships. One of its biggest potential blockbusters, autoimmune drug filgotinib, was acquired from Galapagos NV in a massive deal valued at over $2 billion in upfront and potential milestone payments. Filgotinib is in phase 3 testing for rheumatoid arthritis, Crohn's disease, and ulcerative colitis, and it may be worth as much as $2 billion or $3 billion per year in peak sales if all goes well.

The most straightforward way to juice earnings per share is to reduce the number of shares outstanding. Even with declining net income, which Gilead faces right now, if the company is able to retire enough shares, EPS will still grow. Gilead could retire 38% of its shares outstanding with its current cash hoard of $34.6 billion. It'd be an incredible way to juice EPS growth -- for one year. After that, the comps get tougher -- although, given that Gilead churned out about $14.7 billion in free cash flow over the trailing 12 months, it would probably be able to continue retiring an inordinate number of shares, assuming the company remains so cheaply valued.

The real drawback of buying back shares is that it does nothing to actually move the business forward, which is what Gilead so desperately needs. Gilead should use that firepower to reignite growth, not just to pump up an arbitrary profitability number like EPS.

As Gilead's valuation has come down, its dividend yield has gone up -- helped, of course, by management's raising the dividend twice since its inception in 2015. The company's dividend of $2.08 per share annually now yields about 3%. It's well covered by net income, too, as it eats up only about 22% of Gilead's trailing-12-month earnings, according to data from S&P Market Intelligence. In fact, that's a really low dividend payout ratio -- I usually consider a dividend well-covered at anywhere under 75% of earnings. Analysts expect earnings per share to slip to $7.35 per share in 2017, which means Gilead could nearly triple its dividend -- all the way up to $5.51 per share, for a 7.9% yield at current prices -- before it would hit that magic 75% number for 2017.

That's all without touching an ounce of its current cash. Just imagine what it could do if it chose to tap some of that cash -- it could sustain a 10% dividend at current prices for several years, or pay a big special one-time dividend to shareholders.

Or it could, you know, actually grow the business.

While Gilead has a huge cash hoard, it's sitting on a lot of debt, too -- about $26.3 billion, as of last quarter, at a blended annual interest rate of about 3.7%. Almost all of that is fixed-rate debt, and over 50% of it doesn't come due until after 2025, so Gilead has plenty of time to pay it off. Management could pay it off early and save itself some interest charges, but I'd argue against it. That interest rate is relatively low, and the long maturities of its debt ladder give Gilead lots of time to use the money it currently has to do something more value-accretive.

What will (and should) Gilead do?

Management has given us some clues to its expectations. On the first-quarter 2017 earnings call, CFO Robin Washington noted that "we are prioritizing the use of capital for investing in the long-term growth of our business, including partnerships and acquisitions." That implies management will be doing some combination of the first two ideas I noted, again probably with a focus on oncology or hematology. Now, management's shift toward M&A is likely a function of the massive failure of its share buyback program -- Gilead spent $11 billion in 2016 to repurchase shares, only to see its valuation crumble by 29%. Gilead's leadership only spent $565 million on repurchases in the most recent quarter, a sign that they're clearly shifting strategy.

Of the five options I suggested, the first two are far and away the best for Gilead, as they represent the company's only opportunities to actually grow the underlying business in the near future. That management is now focusing its time and attention there instead of playing games with EPS is a very good sign for any long-term shareholder.