Please ensure Javascript is enabled for purposes of website accessibility
Log In Help Join The Motley Fool
Free Article Join Over 1 Million Premium Members And Get More In-Depth Stock Guidance and Research
By Nicholas Rossolillo – Jul 18, 2017 at 6:01AM

The maker of social games like Words With Friends and Farmville is doing better than it was a year ago. Here's how and what the company has planned going forward.

After years of struggle, Zynga (ZNGA) stock is making a comeback. The company has been posting recent improvements in its top and bottom line, but the question still remains: is this rebound played out or is the company worth betting on? What happened in the last year

After initially soaring in price when it went public in 2011, Zynga stock quickly headed south and stayed there for years. Since my last write-up on the company last year where I called shares a value, things have begun to turn around. 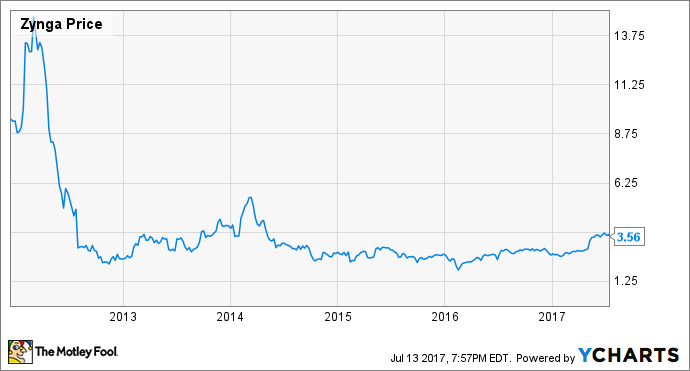 Sometimes when picking stocks we're lucky more often than good, and my call was just that. The company was in dire straits with a stagnant business and bleeding cash. The rebound had far less to do with Wall Street being wrong about the stock price and more to do with what the company has done under the guidance of its new CEO.

In March 2016, the company hired a former executive of Electronic Arts' mobile division, Frank Gibeau. The goal was to speed up Zynga's production and success with mobile games, transitioning away from legacy desktop-based games that centered on social networks.

The company still wants to be a social gaming haven, but the transition to mobile platforms on smart phones and tablets has been an important one as it now represents the bulk of Zynga's business. Mobile bookings -- which adds revenue and deferred revenue from online purchases -- was 86% of the total in the first quarter, up from 76% the year prior.

The company hit 18 million daily average users of its mobile games during the quarter, a 16% year-over-year increase, and mobile bookings were up 27% year-over-year. Bookings are an important measure of success for Zynga as it indicates the direction revenue is heading.

One of Zynga's most popular games, Farmville. Image source: Zynga.

What's next in the world of Zynga

Now that the company has re-stoked growth in its mobile games business, it is trying to drive users and time spent on those games by promoting live events. That stays true to the company's social gaming mantra, and is helping boost the financial results that have lifted share prices as of late.

In the spotlight last quarter was Zynga Poker. Last year, the company added challenges, leagues, and Poker Week. Since then, daily average users are up 78%. Another highlight was the drag racing game CSR Racing 2, which made it into the top 15 grossing games in U.S. app stores in the spring, helped by a partnership with The Fate of the Furious movie around its release in theaters.

Along with growing the base of users of its mobile games, Zynga is also trying to do more with less -- the "less" being business expenses. Gibeau has helped in that regard as well, with operating expenses reducing to 71% of total revenue compared with 84% in the prior year period. But with the bottom line still running at a loss of $9.5 million last quarter and projected at another $6 million next quarter, management has admitted there is still work to be done.

Mobile gaming apps have become a highly competitive business, with video game heavy hitters like Electronic Arts and Activision Blizzard competing. In spite of this, Zynga has managed to create a little breathing room for itself and is back to free cash flow positive. 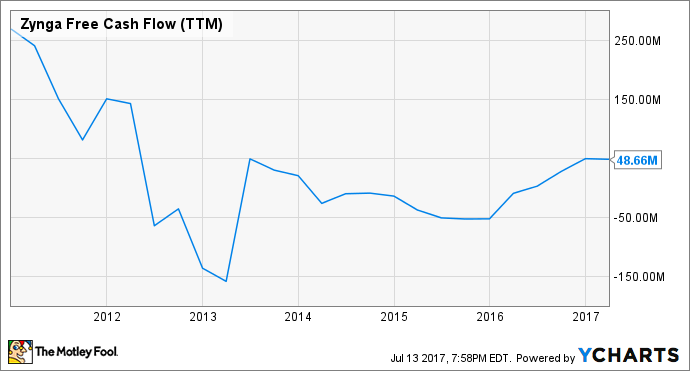 That could help the company continue to invest in new future hits, and the company said it will increase its advertising spend later in the year. Zynga isn't out of the woods yet, but it's hard to ignore the impact the new management team has had thus far on rebound efforts.