Apple's (NASDAQ:AAPL) automotive strategy may be in disarray, but the company continues to march forward with assembling all the pieces it will eventually need if it ever decides to pull the trigger on an electric car. The latest news comes from China's Yicai Global, which reports that Apple has been working with Contemporary Amperex Technology Ltd. (CATL) to develop automotive batteries. CATL was previously a part of Amperex Technology Ltd, which supplies batteries for other Apple products, but has since been spun off into a separate entity.

Based in Fujian, China, CATL currently produces battery packs for electric buses, electric passenger vehicles, electric trucks, and for stationary energy storage. The company has been the third-largest battery manufacturer in the world for the past two years, shipping 6.8 GWh worth of batteries last year (up from 2.4 GWh shipped in 2015). 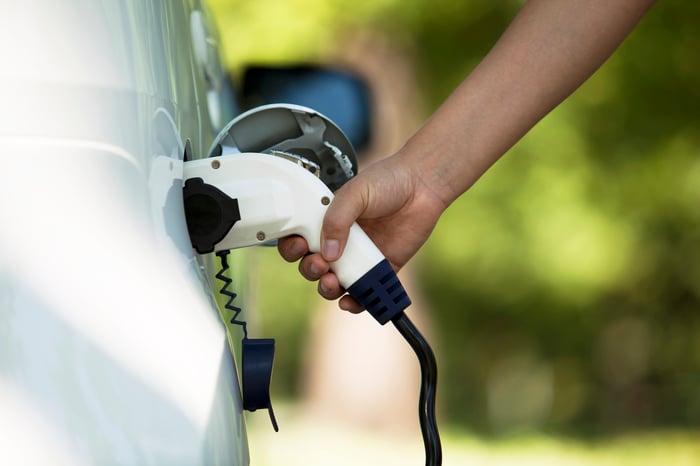 At face value, the news seems to conflict with reports last year that Apple was pivoting its automotive aspirations away from hardware in order to focus more on autonomous driving software, which was rather un-Apple-like. More recently, CEO Tim Cook finally publicly acknowledged the company's autonomous car ambitions last month, saying that self-driving software is considered a "core technology" and is essentially an incredibly complex artificial intelligence (AI) project.

We also know that Apple obtained permits from the California DMV in April to begin testing autonomous vehicles, a few months after confirming its self-driving car investments in a letter to the National Highway Traffic Safety Administration. Despite all the mixed messages regarding Apple's direction, Morgan Stanley still thinks that Apple will eventually manufacture a car. The most plausible explanation for all these seemingly contradictory reports is that Apple itself is unsure of how to proceed. It knows it wants to make an autonomous, connected, electric car, but has never tackled this type of manufacturing or development.

My guess would be that Apple was exploring manufacturing and hardware, but then realized it was doing so a bit prematurely, which is why it ended up laying off hundreds of automotive engineers so that it could focus on autonomous driving software. Perhaps Apple figured it could return to the hardware part later on. After all, solving autonomous driving is predominantly a software challenge right now. For example, Tesla began installing a second-generation hardware suite in all of its vehicles starting in October 2016, arguing that this updated set of sensors is sufficient for fully autonomous driving -- once the software is ready from technical and regulatory standpoints.

At the same time, the most important piece of hardware in an electric car is the battery, including the underlying cell chemistry, so it also makes sense that Apple is already exploring battery technology with an experienced partner. Aspects like the chassis, suspension, and undercarriage can wait for the time being (these are some of the areas where Apple has laid off hardware engineers, according to Bloomberg).