Please ensure Javascript is enabled for purposes of website accessibility
Log In Help Join The Motley Fool
Free Article Join Over 1 Million Premium Members And Get More In-Depth Stock Guidance and Research
By Andrew Tonner - Jul 20, 2017 at 10:42AM

Let's face it: When it comes to money, people don't always make good decisions. Thanks to a litany of psychological biases, investors often sell stocks for below their intrinsic value or overpay for shares.

With that in mind, let's consider Qualcomm (QCOM -2.50%), whose shares have been battered over the past year. 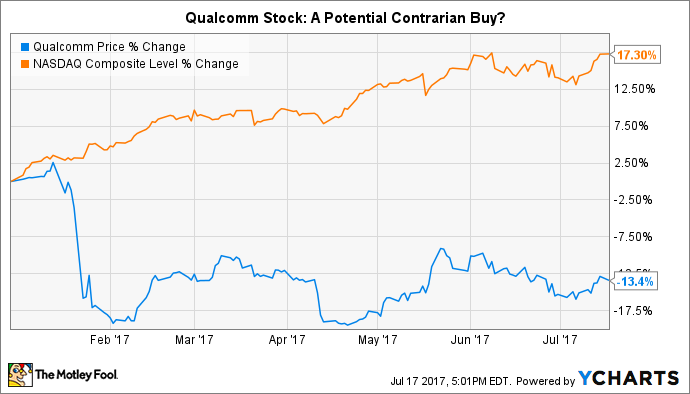 Qualcomm faces significant risks, but have the shares have been oversold? One person's trash is always another person's treasure, so let's examine the case for buying Qualcomm stock at its current lows.

Despite its current problems, Qualcomm has numerous positives that the market may be overlooking. The first is its pending acquisition of NXP Semiconductor (NXPI -1.33%). The deal has already gained regulatory approval in the U.S., and the number of shares tendered to the deal continues to climb. It still needs to gain approval in critical international markets, including China, the EU, and South Korea, but analyst notes suggest that the company is actively managing the approval process in those places. Assuming the deal closes, it will significantly improve Qualcomm's exposure to the Internet of Things, by way of NXP's leading portfolio of IoT chips.

Another attractive factor working in Qualcomm's favor is its valuation. Should Qualcomm's legal headaches eventually abate -- and that's not a sure thing -- its trading multiples could expand by a good degree. Shares currently trade at 18 times trailing-12-month EPS and 14 times next year's estimated earnings, well below the S&P 500's current multiple of 26.

At the same time, the risks facing Qualcomm deserve serious consideration. The first is additional regulatory pressure. The past several years have brought an avalanche of antitrust investigations and fines from regulators in China, South Korea, the EU, and the United States. Some of these investigations have concluded, as in China, where Qualcomm has paid the $975 million fine it agreed to as part of its settlement with regulators there. But the company has opted to fight other judicial decisions, including the $853 million fine South Korean regulators levied on the chipmaker last December. Other investigations remain ongoing, which means Qualcomm could still face additional fines.

The second risk Qualcomm faces is a potential challenge to its intellectual-property licensing terms from suppliers. It's currently engaged in a bitter dispute with tech giant Apple, which is suing Qualcomm for $1 billion in damages and is withholding its royalty payments to the chipmaker. The concern here is that another major supplier, such as Samsung, could follow Apple's playbook, hoping to further damage Qualcomm at a time when it seems vulnerable.

The good news on this front is that Qualcomm's revenue base isn't very concentrated. According to the company's 2016 annual report, only Apple and Samsung accounted for more than 10% of fiscal 2016 annual sales. Moreover, Samsung already pays one of the lowest royalty rates among Qualcomm suppliers, thanks to their fabrication relationship. So it wouldn't have as strong an incentive as Apple did to take action. Either way, this is certainly something investors should watch.

The last risk factor is that Qualcomm's NXP deal could fall through, for a couple of reasons. First, regulators could block the deal -- although that's unlikely, since the companies' product portfolios don't overlap much. Second, a new bidder could top Qualcomm's $110-per-share offer. Large tech companies have been paying increasingly hefty premiums to acquire high-growth chipmakers, as with Intel's $15.3 billion buyout of Mobileye.  On the other hand, there aren't a lot of companies that can finance a $47 billion transaction.

Qualcomm stock has been on a brutal ride, and it's difficult to predict what the future could hold. The stock is tantalizingly cheap, but investors will need to research the pros and cons thoroughly before investing.