The sportswear brand is skidding again this year as sales growth has suddenly shrunk.

Shares of Under Armour (UA 0.38%) (UAA 1.28%) have been falling behind this year, with the sportswear stock down 30%, according to data from S&P Global Market Intelligence.

The stock collapsed following an ugly fourth-quarter earnings report at the beginning of the year and it's been unable to recover since, trading sideways. As the chart below shows, essentially all of the losses came on that earnings report, with the class C shares faring slightly better. 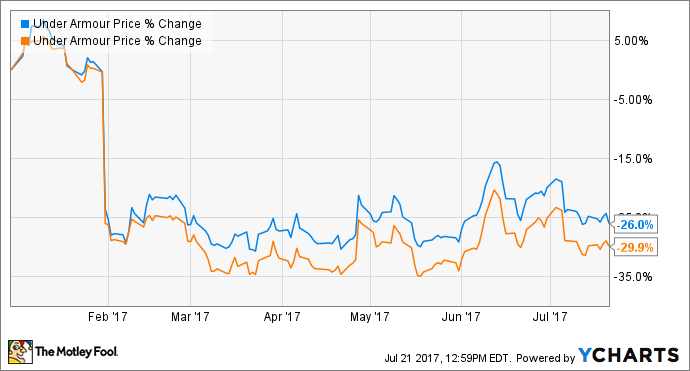 Under Armour's slide in January marked the second quarter in a row that shares tumbled as revenue growth has suddenly slowed. After 26 quarters of sales growth of 20% or better, revenue increased just 12% in the crucial holiday period; the company continues to suffer from the rash of bankruptcies in the sporting-goods industry, including that of Sports Authority. Under Armour's wholesale revenue was up just 5% in the quarter as a result. Gross margin fell 320 basis points in the quarter to 44.8%, a sign the company was forced to discount products as it misread demand. Operating income was down 6%, and earnings per share fell by a penny.

Last October, the company stepped away from a goal of generating $800 million in operating income by 2018, and its 2017 outlook made clear that it would also fail to reach $7.5 billion in revenue by next year. The company projected revenue growth of just 11% to 12% for the current year; it also projected a decline in operating income, due, in part, to strategic investments.

Under Armour's first-quarter earnings report in April was equally uninspiring, as revenue grew just 7% and the company reported its first-ever loss as a publicly traded company. The stock rose modestly, however, as results beat expectations.

Under Armour's slowing growth is a sign that the company needs to change if it wants to one day reach the size of rivals Nike and Adidas, which appears to be CEO Kevin Plank's goal. At a time when fashion trends have swung to classic sneakers like Adidas Superstars, Under Armour has found itself out of the mix. The company needs to establish itself as a fashion brand as well as a performance one. It's taking steps to do so, launching an Under Armour Sportswear fashion line last year, and signing an agreement with rapper ASAP Rocky to promote its lifestyle products.

An upcoming partnership with Major League Baseball and new deals with colleges like UCLA also hold promise. However, Under Armour's valuation still seems stretched for a company with falling profits this year and low double-digit revenue. It may be years before those investments pay off.