Millions of Americans love motorcycles, and it's only natural to think that the companies that make the products you love might make good investments. Many investors don't immediately think of Polaris Industries (NYSE:PII) in connection with motorcycles, but the off-road vehicle specialist made a bigger entry into the business with its purchase of Indian Motorcycle in 2011. Harley-Davidson (NYSE:HOG) is an obvious pick for motorcycle enthusiasts. Neither stock has made big moves lately, but as the summer season is here, investors want to know which of the two motorcycle-making companies looks like a smarter choice right now. Let's look more closely at how Polaris Industries and Harley-Davidson compare on key business measures, with an eye toward figuring out whether one or the other belongs in your investment portfolio.

Neither Polaris nor Harley-Davidson has delivered strong performance to investors lately. Over the past year, Polaris stock is up 4%, while Harley has seen no change. Over the longer run, the stocks haven't been able to regain much ground from major losses in 2015.

From a valuation perspective, even though the two stocks have seen a roughly similar performance, Harley-Davidson looks like the more attractive choice. When you focus on trailing earnings, Polaris looks extremely expensive, with an earnings multiple of 37. Harley-Davidson looks cheap by comparison with a trailing multiple of just 14. To some extent, that disparity results from depressed earnings at Polaris that are expected to rebound. Even if you look at future projections, though, Polaris trades at 18 times forward earnings estimates, which is far higher than the corresponding figure of 12 for Harley. That gives Harley-Davidson an edge over Polaris on the valuation front. 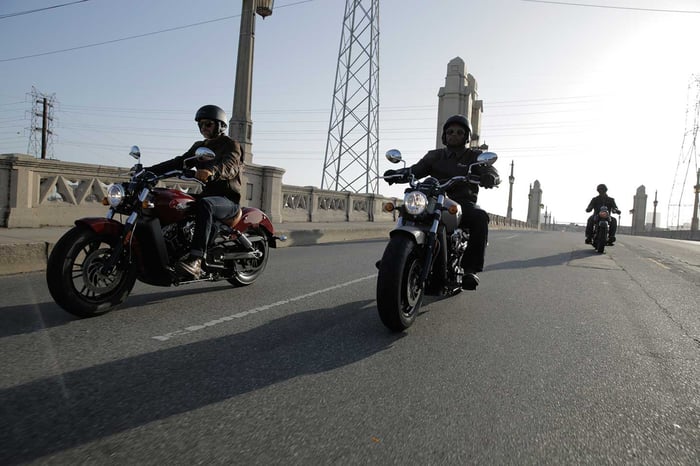 Polaris and Harley-Davidson both pay dividends, but again, Harley-Davidson has a slight lead in terms of yield. Harley's dividend yield is 2.9%, while Polaris lags a bit at 2.6%. In terms of sustainability, Polaris has a higher payout ratio of nearly 90%, compared to just 40% for Harley-Davidson. Polaris should see its payout ratio drop somewhat if the expected earnings recovery comes to pass.

Historical dividend growth has been a hallmark of just one of these companies. Polaris has raised dividends for 22 straight years, and during much of that period, the company made boosts of 10% or more per year. That rate of dividend growth has slowed lately, but even so, Polaris has avoided the dividend cut that Harley-Davidson made in 2009 during the financial crisis. As a result, Polaris gets the edge among dividend investors.

Both Polaris and Harley-Davidson are struggling against tough industry conditions and other difficulties in their respective businesses. Polaris has had to deal with extensive recalls over the past couple of years, and investors and customers alike have started to worry that the company's commitment to quality control simply isn't resulting in product reliability. In addition, for motorcycle enthusiasts, Polaris decided that it would discontinue its Victory line in favor of focusing on Indian Motorcycle. Indian has bucked the trend of downward motorcycle shipments throughout the industry, but the Victory elimination was a huge factor in the nearly one-third drop in revenue for Polaris' motorcycle segment in the first quarter of 2017. Until the streak of painful and costly recalls stops, Polaris could have trouble making much headway in its stock price.

Harley-Davidson isn't dealing with recall issues, but it has suffered from poor demand. In its most recent quarterly report, Harley said that overall revenue fell 7%, with a similar-sized decline in earnings. The company now expects that full-year shipment volume will be down 6% to 8% compared to 2016 levels, which is quite a bit worse than Harley's previous guidance for flat shipment numbers. In response, Harley-Davidson announced layoffs, cutting 180 manufacturing jobs in its Milwaukee and Kansas City facilities. Although CEO Matt Levatich has argued against the conclusion that younger generations aren't riding motorcycles as much as Baby Boomers, Harley-Davidson will have to prove that proposition to investors with higher sales numbers in the future.

Both Polaris and Harley-Davidson are dealing with difficult conditions, and Harley's better valuation offsets Polaris' better dividend. What pushes the decision toward Harley-Davidson is the fact that there are fewer quality concerns among Harley products, and regaining a strong reputation could take Polaris years.