Semiconductor giant Intel (NASDAQ:INTC) is taking its business in two directions these days. The middle ground between the big-iron data center market and the lively Internet of Things sector is fading away, as Intel's management prefers to focus on the extremes of its bisecting target market.

Don't get me wrong; The client computing segment where Intel sells core processors and chipsets for consumer-grade PC systems remains an important and profitable business. That group produced 54% of Intel's total sales in the first quarter of 2017, along with a staggering 84% of the company's operating profits. But that's down from 62% of sales and 95% of operating income in the fiscal year 2014, and the trend toward a more diverse business model will continue. 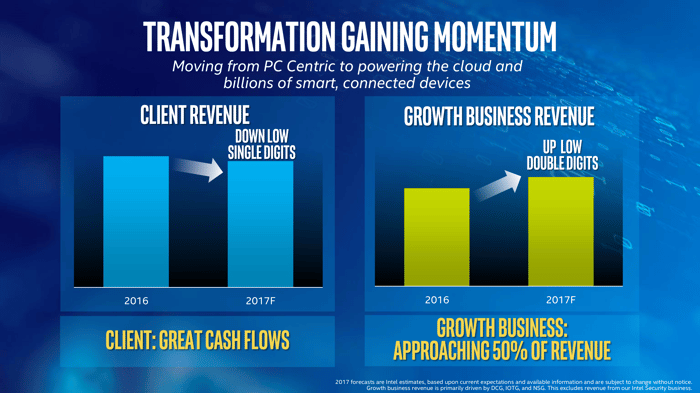 That's the big picture to keep in mind when Intel reports second-quarter results on Thursday night. Here are some finer details to watch in that wide-angle shot.

Bear in mind that operating margins were unusually thin in the year-ago quarter due to a $1.4 billion bundle of one-time restructuring expenses.

The pending buyout of autonomous driving systems specialist Mobileye (NYSE:MBLY) is moving closer to completion. In the last three months, the deal cleared regulatory approvals in several countries and got approval from Mobileye's shareholders.

In other news, both Intel and smaller rival Advanced Micro Devices (NASDAQ:AMD) has released several brand new processors in recent months. Several chips based on Intel's Kaby Lake architecture started making their way into desktops and server systems in the second quarter, facing off against AMD's Ryzen and EPYC products.

As usual, AMD and Intel report their results in the span of a couple of days. Investors and processor enthusiasts alike will have a much clearer picture of competitive trends in the PC processor market by the end of the week.

Above all else, investors and analysts will be looking for a coherent long-term vision. The Mobileye buyout is set to move Intel deeper into the automotive computing sector, but Intel is also giving up on smart watches and fitness trackers right now. So the company is refining its next-generation growth strategy rather than charging full tilt at every potential target market.

We need more detail on what's next, and how Intel plans to balance its long, slow depreciation of the PC sector without undermining its largest cash cow. It's a tricky balancing act, and every detail matters.