As one of the cheapest stocks on the market, General Motors is a must-watch name for value investors today.

Typically, the cheapest stocks in the S&P 500 are cheap for a reason. Usually, they have some kind of existential issue they need to overcome in order to regain investors' faith and a more reasonable valuation from Mr. Market.

The same cannot be said for General Motors (GM 3.63%), a largely healthy company that simultaneously trades at a rock bottom discount to the market. The company's main auto business continues to chug along nicely, and GM has made meaningful progress in matching the efforts from the likes of Tesla and Alphabet to dramatically change the auto industry.

As such, let's delve deeper into what easily makes General Motors the cheapest driverless car stock on the market today.

Though it is easy to regard Detroit automakers like GM as slow-moving incumbents, the reality is that the Detroit auto behemoth, alongside Ford, is intent on winning the race for self-driving car supremacy. In fact, a recent piece in The New York Times  detailing GM's driverless EV efforts characterized GM CEO Mary Barra's belief these two emerging technologies represented the future of transportation was so strong that it was "worth betting the company on." Her company's actions certainly support this case.

Among its most notable efforts to break into these dual markets, GM invested $500 million in ride hailing service Lyft, serving as the lead investor in its $1 billion Series F round of fundraising late 2015. The deal also led to a partnership that allows for sharing of key technologies between the two and gives GM a key foothold in the booming market for ride sharing services, which some analysts believe will eventually replace traditional car ownership. 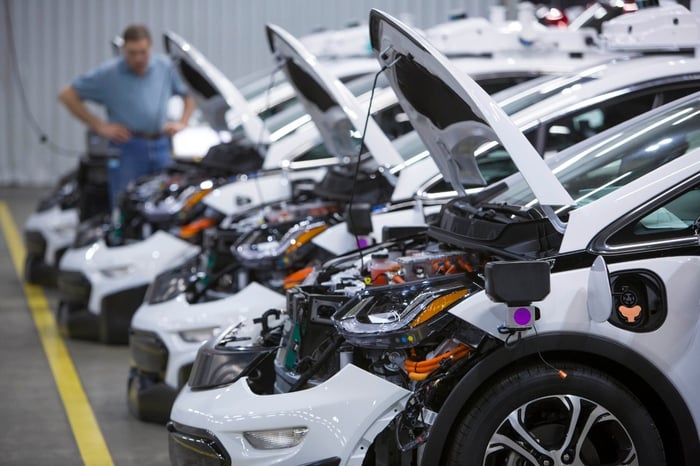 GM has also moved aggressively to acquire technologies it sees as pivotal to shoring up its long-term competitive position. In 2016, the company spent over $1 billion to acquire self-driving car service Cruise Automation and ride hailing back-end service Sidecar Technologies, though the exact total was not disclosed publicly. The company has also said it plans to invest another $600 million in self-driving cars and other emerging standards to continue to bolster its competitive position amid this rapidly evolving competitive landscape. These efforts are clearly paying off.

A recent report by Navigant Research named Ford and GM as the two sole leaders in the automated driving arms race. One of the keys to this ranking is GM's ability to fully integrate the technology needed to power self-driving capabilities into the car from the ground up, rather than retrofitting after-market kits onto cars like Alphabet's Waymo unit or Uber must do.

The company has also already begun small-scale assembly line production of a driverless version of the Chevy Bolt in its Orion, Michigan plant. The company has already produced 140 Bolts that GM plans to use in road tests. So while GM will need to continue to prove it can execute nimbly as competition intensifies, all signs point to GM sitting in an extremely strong position, making its dirt cheap stock all the more intriguing.

GM Stock: Too cheap to last

Trading at 5.6 times its last 12-months earnings and 6.1 times its 2018 expected EPS, General Motors stock is unquestionably one of the cheapest among stable large caps on the market. To give a greater sense of just how undervalued the automaker is at present, the S&P 500 index currently trades at 26 times its LTM earnings. Moreover, GM's 4.1% dividend yield stands at more than double the S&P 500's 1.9% payout.

This kind of valuation would be understandable if GM were sitting on death's doorstep, but the reality is that GM is in perfectly fine financial health. Automaking is a capital intensive business, which means the industry relies heavily on debt within its capital structure. Case in point, GM carried $90.9 billion in debt as of its most recent report, which gives it a debt-to-equity ratio of 3.9. However, GM also generated $18.9 billion in cash flows from operations over the last 12 months, so the company should have no issues meeting its interest obligations. Ultimately, GM appears to deserve a clean bill of financial health, making its bottom barrel valuation all the more vexing. This dynamic hasn't gone entirely unnoticed either.

Recently, the well-known hedge fund Greenlight Capital announced a 3.6% position in General Motors stock, making it the automaker's fifth-largest shareholder. As part of the investment, Greenlight and its billionaire founder David Einhorn proposed GM create a dual-class stock structure they believe could unlock anywhere from 24% to 72% value for GM shareholders as of its late March share price, which was only moderately lower to its current stock price.

The deal proposal was voted down at GM's recent shareholder's meeting. However, people are clearly beginning to take notice of the automaker's depressed stock price. Given its progress in driverless car tech, investors looking for cheap stocks would do well to consider further researching GM stock.